Although it is old and on the brink of retirement, the 747-400 still holds a special place in my heart, as I mentioned in my review of the Asiana First Class product during my RTW trip. There is something quite special about boarding an aircraft as culturally important as the 747. The recent passing of Joe Sutter, the manager of the design team for the original 747, reminded me how the aircraft single-handedly revolutionized the way we travel. To put things in perspective, the predecessor to the 747 was the 707, which carried 110 passengers to the 747’s 360. The 747’s length is longer than the Wright Brother’s first flight.

Unfortunately the 747 is not long for this world; the 747-8 has sold poorly and more and more airlines will be phasing out their 747-400s in the near future. Cathay Pacific, for example, will be retiring theirs in a matter of weeks. So if you’re a child of the 90s or earlier and want to say a final farewell to this glorious machine, no better time than the present. 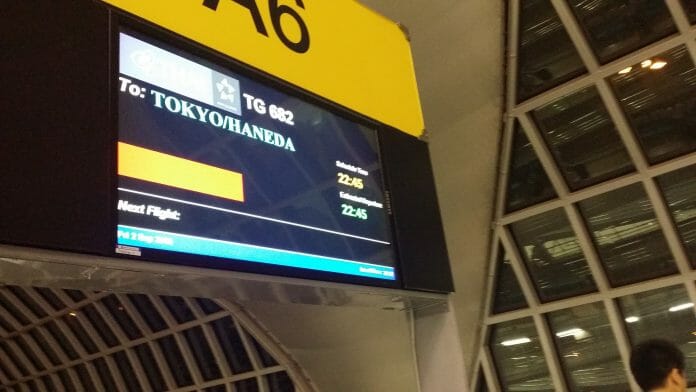 My flight to HND was departing from Gate A6 on the far end of BKK airport. We were escorted there by a lounge staff member, which seemed to me to be sort of redundant given that it’s pretty much impossible to get lost in an airport.

Helpful information from this FT thread–

This is how the old Royal First looks. The seats are full flat, but don’t have a lot of privacy. The throne style seating sort of reminds me of SQ’s old Skysuite product, without the leather. 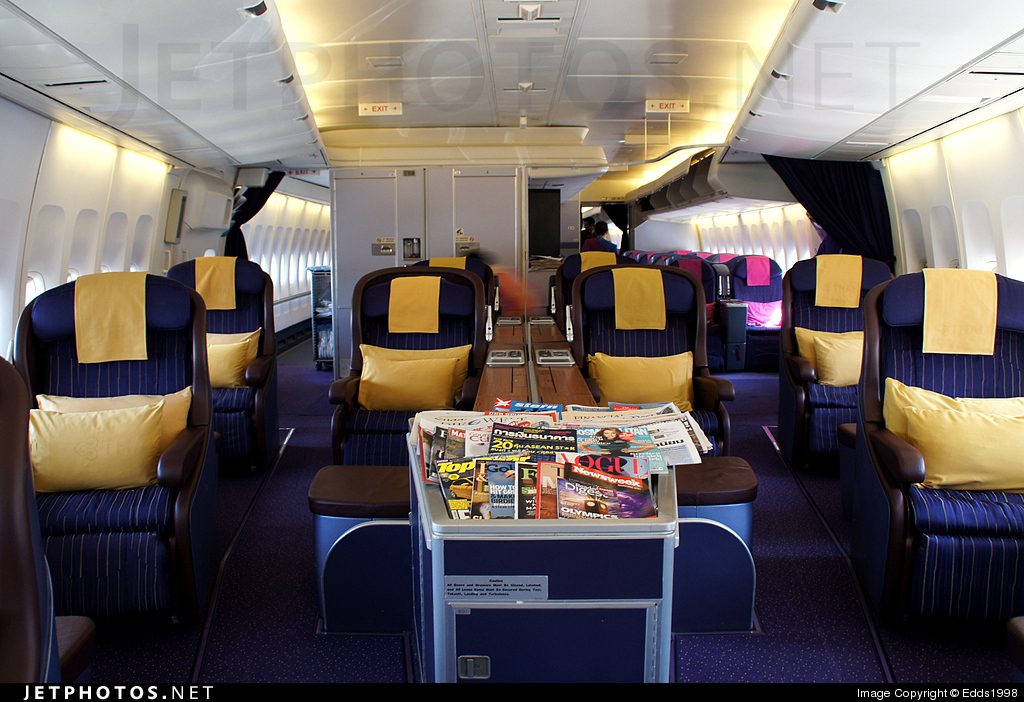 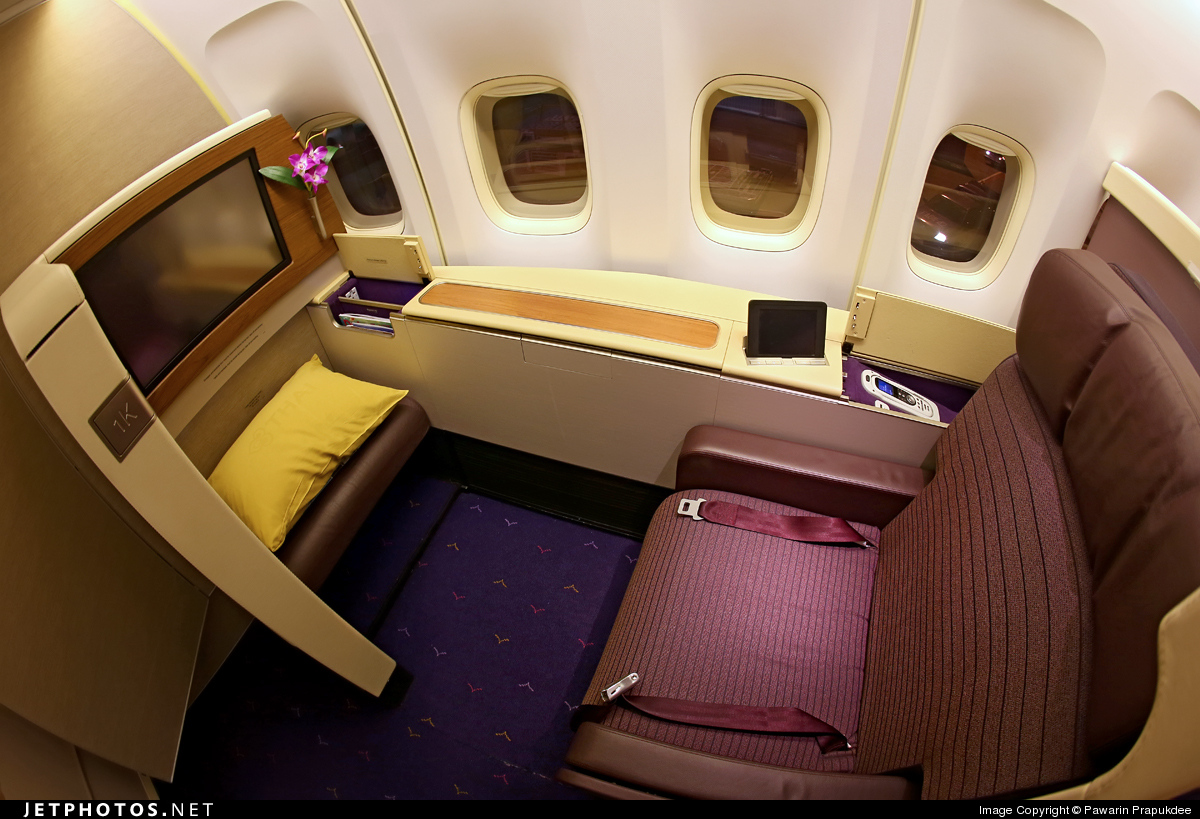 Although we were booked to fly with the new First Class, Thai is notorious for doing last minute equipment swaps, so I was relieved when I entered the cabin and saw that nothing untowards had happened. 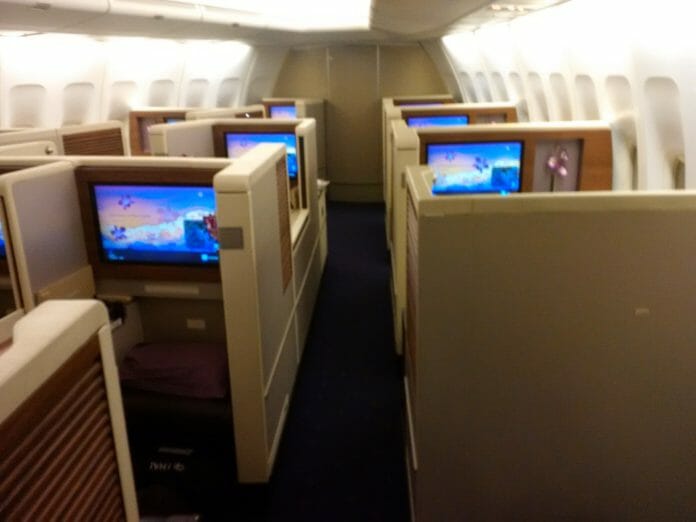 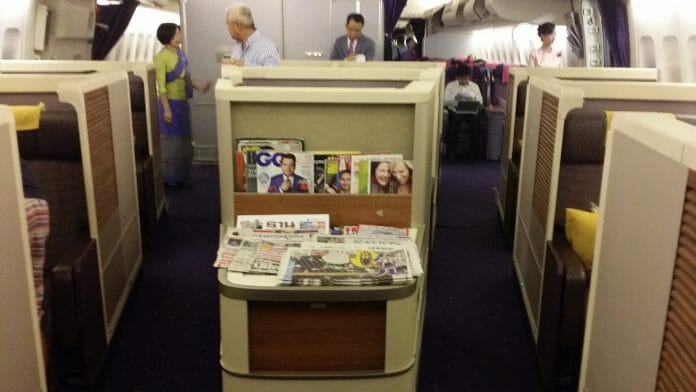 There are a total of 10 suites in Royal First on Thai’s refurbished 747s. I had seat 1A in the nose of the plane. 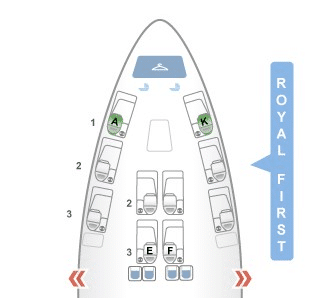 1A offers a good degree of privacy because of the way the nose is curved. Unless someone is standing right next to you, it’s impossible to look into your suite. 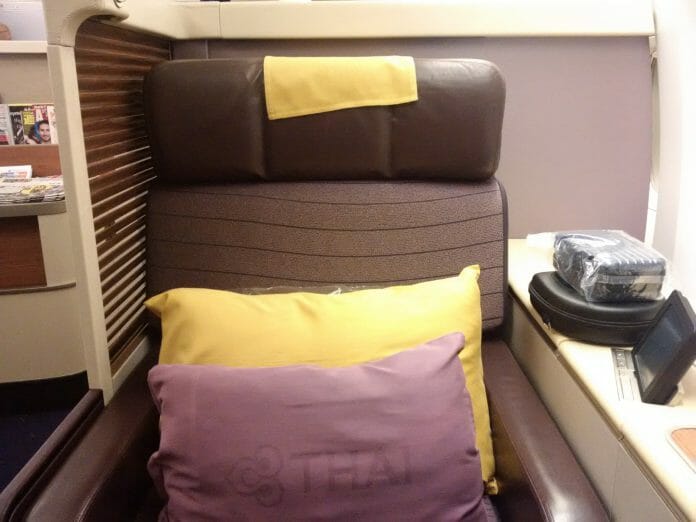 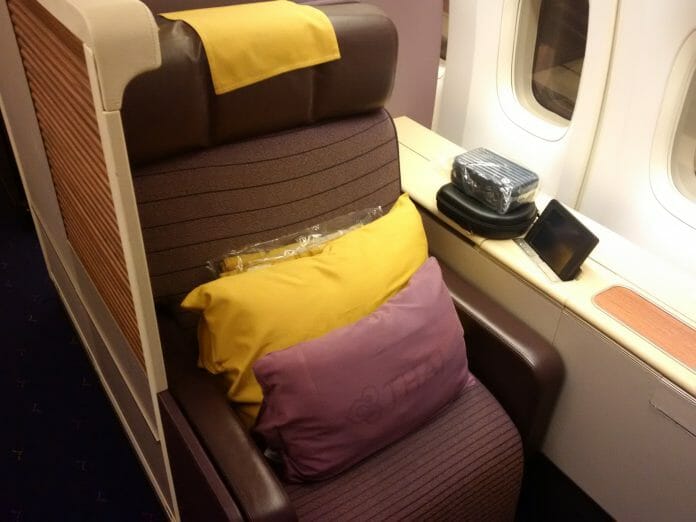 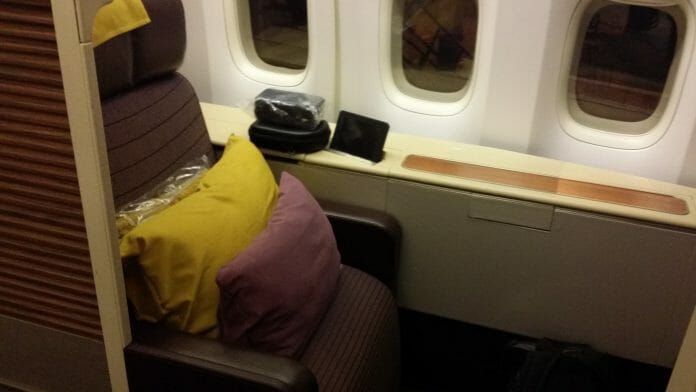 Each suite is spacious, with a ton of leg room to stretch out into 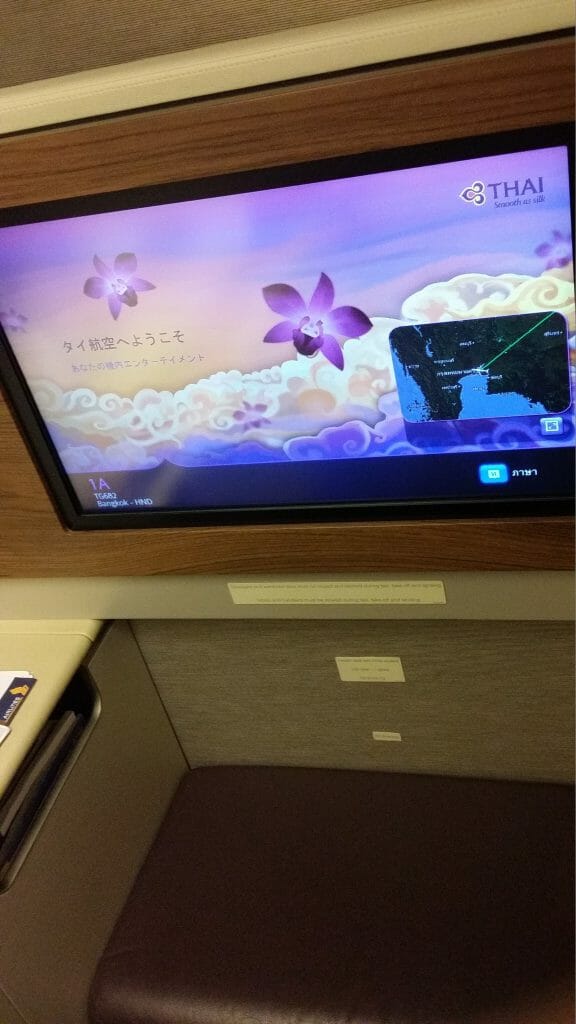 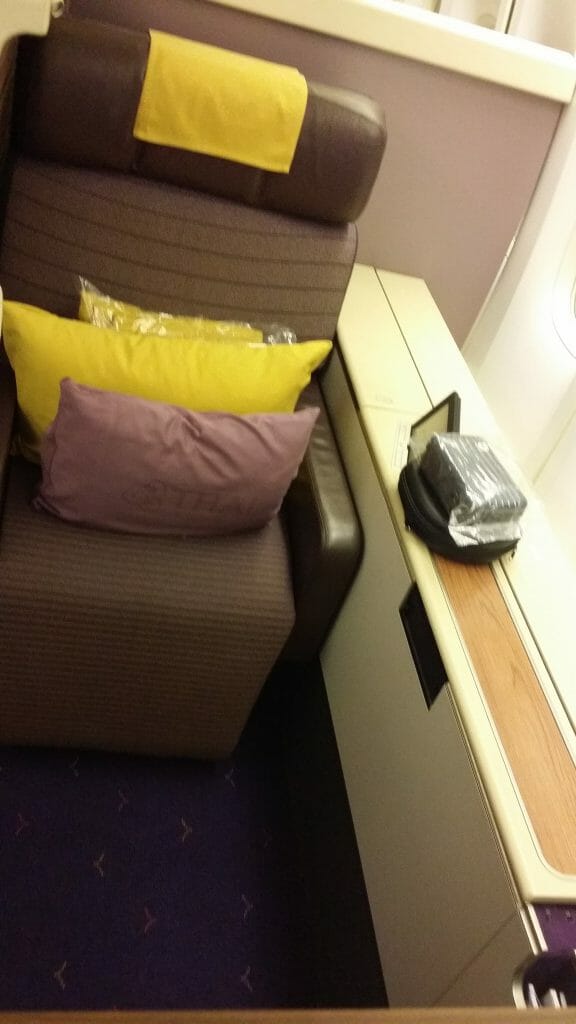 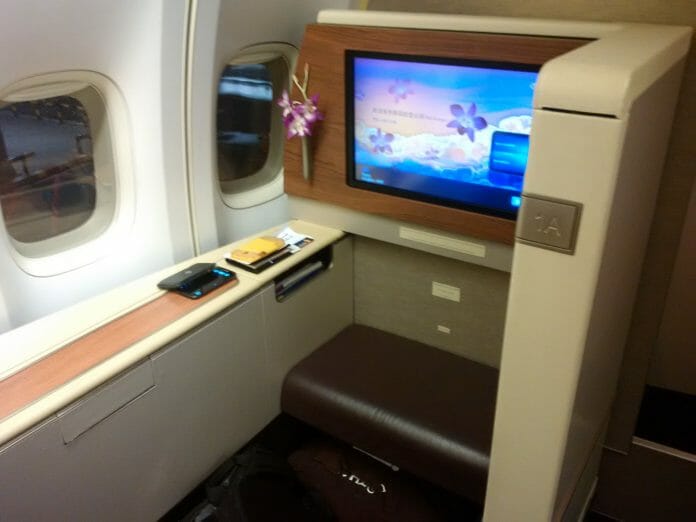 The seat has a good amount of storage area for everything you need. There is a nifty tablet built into the seat that lets you control all the different features. really though, it’s a duplication of the buttons below the tablet so I’m not sure why they felt it necessary to include. Maybe at one point the tablet was supposed to be integrated into the IFE system but they gave up. 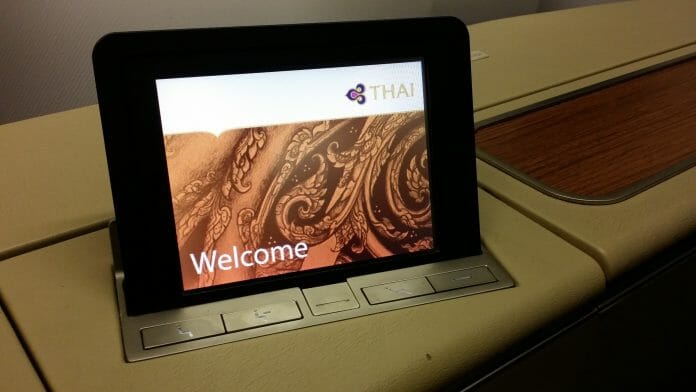 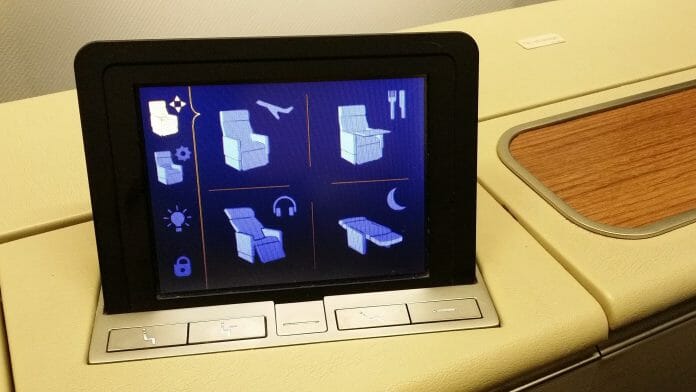 Each seat also has its own flower vase just off the side of the TV screen with an orchid in it. Lufthansa has roses, if I remember correctly. 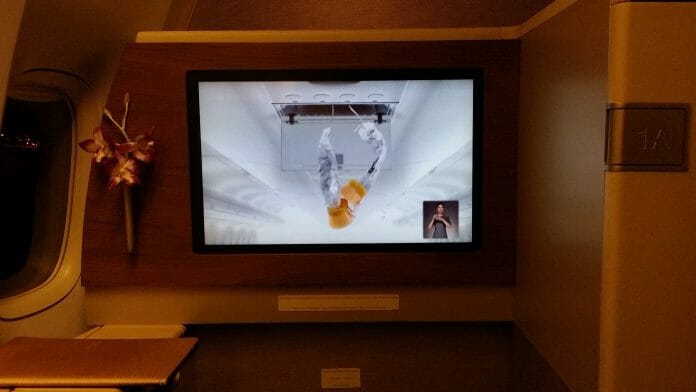 Thai gives out Rimowa amenities kits to First Class passengers. The only other airline I know who does this is Eva (they don’t have First Class, so Business Class passengers get them). I believe Lufthansa used to offer them but on my latest flight I received a different branded one so they might have changed. 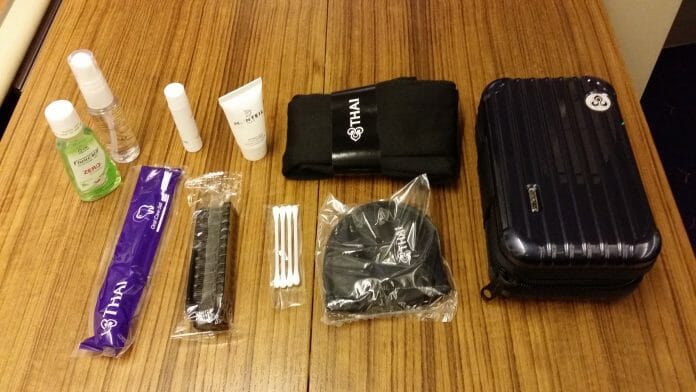 There is mouthwash, a comb, Monteil branded facial moisturizer, lip balm, hydration spray, a pair of socks and a cheap toothbrush kit (although to be fair I haven’t seen any airline go all out on the airline toothbrush- why not?)

I read conflicting reports about whether or not Thai offers PJs in First Class. Fortunately they were available on this flight. The PJs are not branded, like Cathay Pacific’s Shanghai Tang, but they were comfortable enough and still better than nothing. 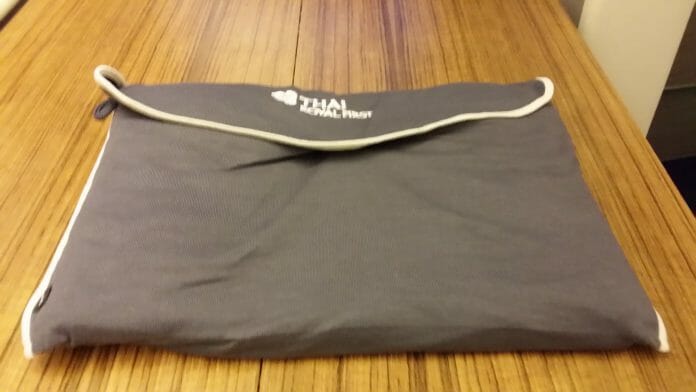 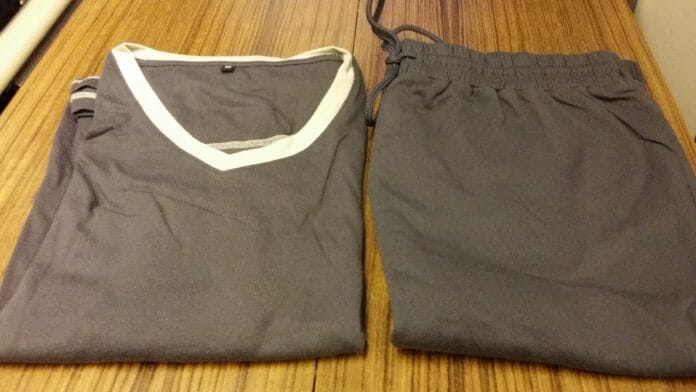 Thai’s headphones are supposedly noise cancelling, but the sound quality was very poor. They don’t offer the same high quality headphones that SQ has (Bose QC15s). 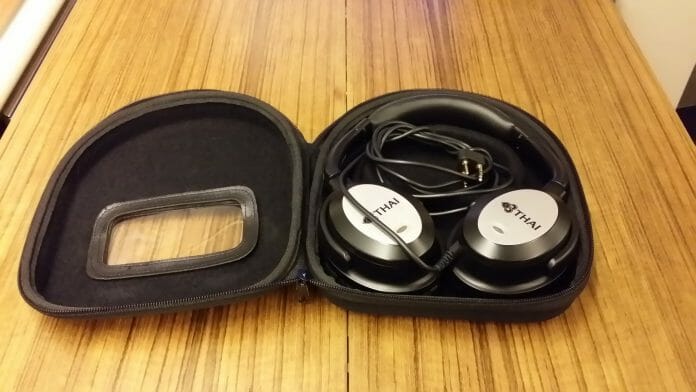 The attendants came around to introduce themselves and serve pre-departure drinks. Dom was offered and accepted. 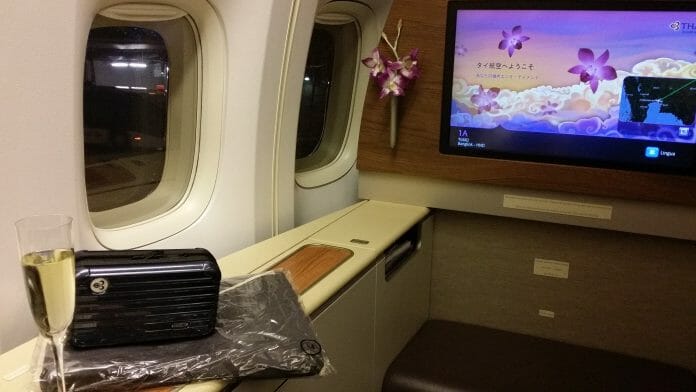 Menus were distributed and orders taken for dinner. Even though this was First Class, dinner would be a very short affair. I suppose it’s more similar to the supper service on SQ, even though SQ’s abbreviated supper service is still somewhat longer than this. 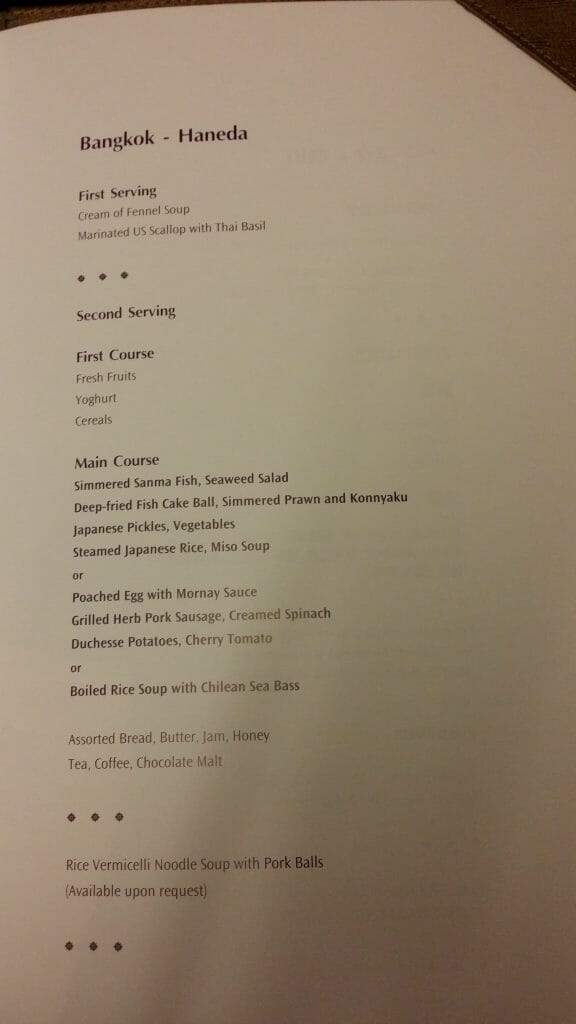 For comparison’s sake, here’s the SQ menu for a Suites flight (albeit on a longer, 13 hour route) 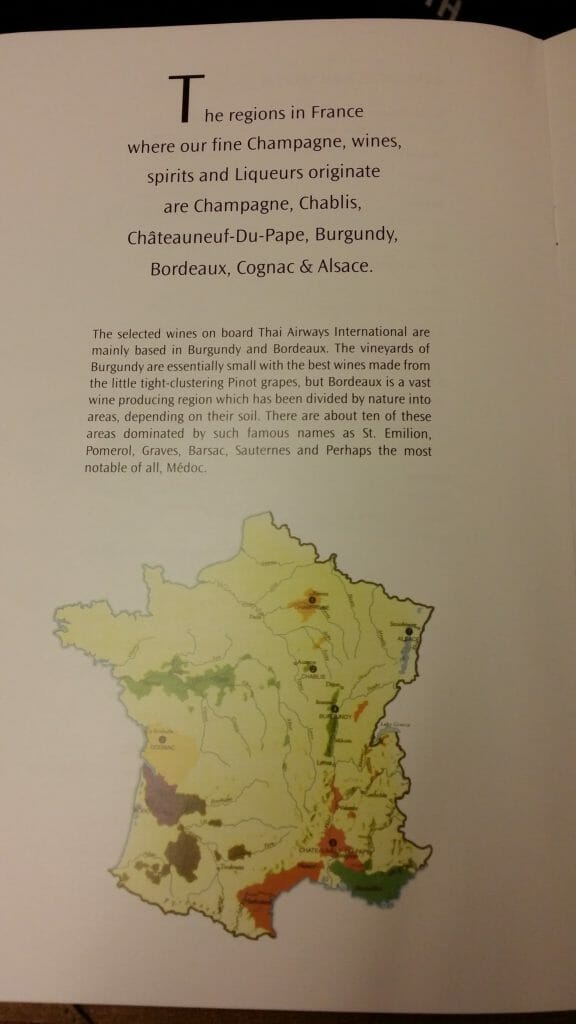 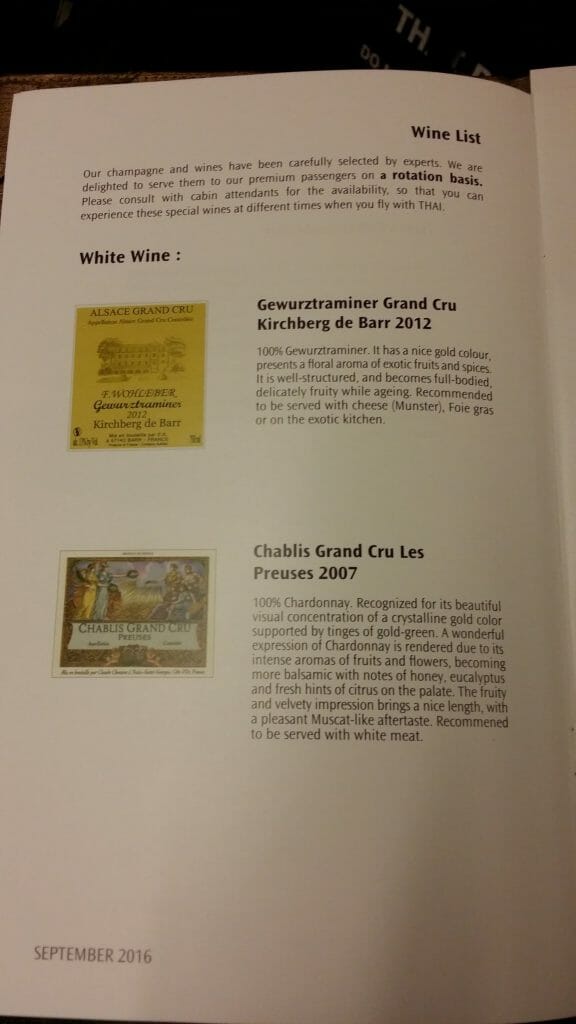 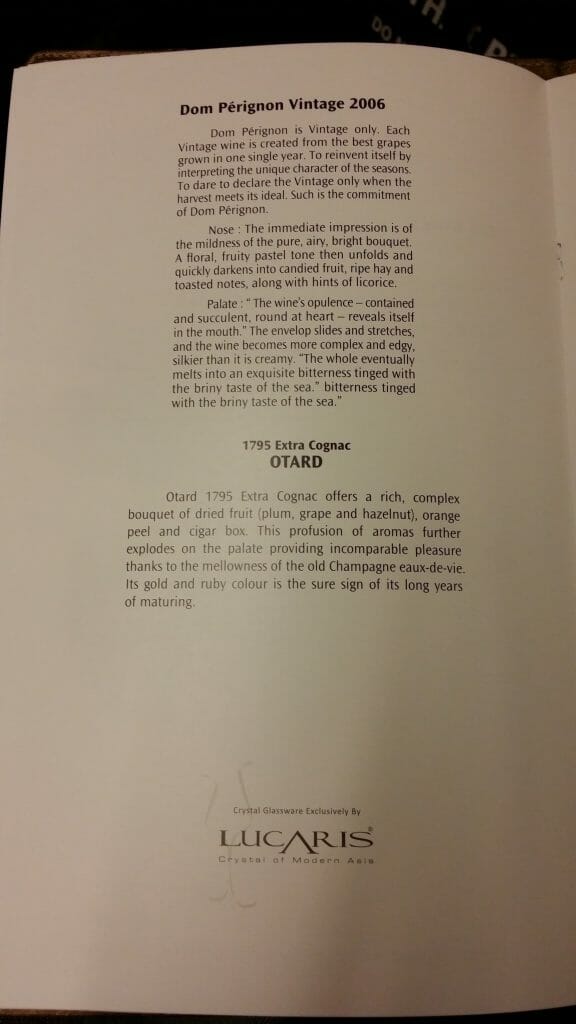 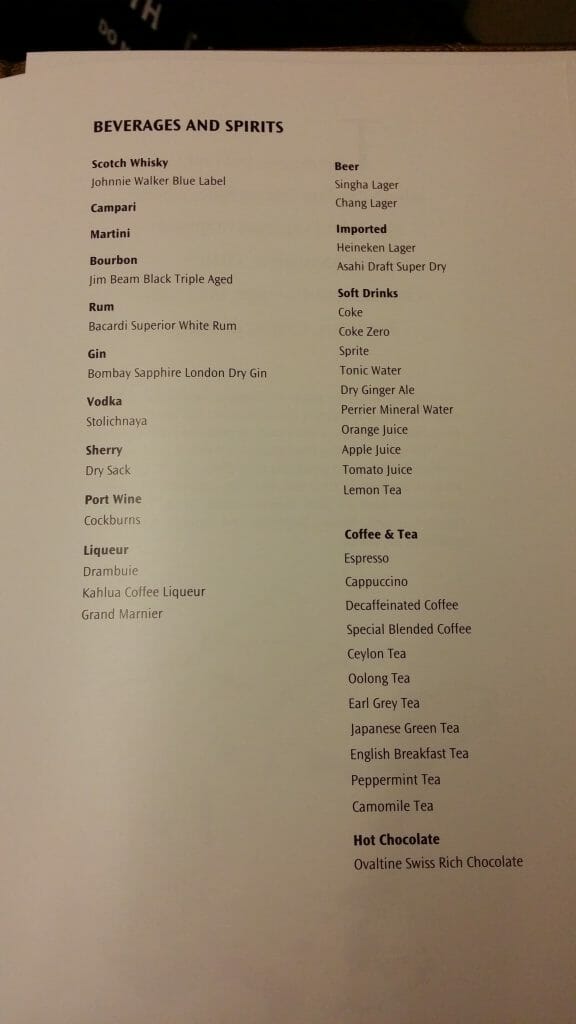 With red eye flights like this maximizing sleep is the name of the game, so I was interested to see how quickly the crew could finish serving a full First Class cabin of 10 people.

Within 30 minutes of taking off the first course was delivered. So far so good. The scallops were nicely done, the cream of fennel soup was passable. 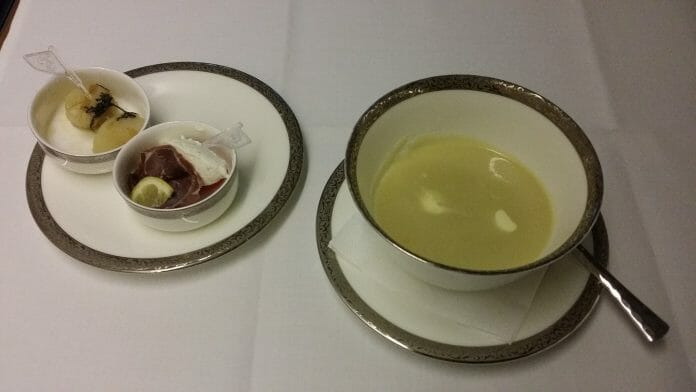 After this was cleared, I waited for the main course to be served.

30 minutes later I asked the stewardess about the main course. She looked completely surprised and said “we serve it before landing, would you like to have it now?”

I was completely taken aback. I mean, I had never encountered a situation where an airline split one meal into two parts, and I certainly wasn’t told about it when ordering. I suppose if you look at the menu you might be able to tell that it’s split into two, after all it’s a bit weird to serve yogurt and cereal for supper. But still, I was quite annoyed that I had basically waited another 30 minutes for nothing, which on a short overnight flight makes a difference to quality rest.

The main took another 15 minutes to arrive and was decidedly mediocre. There were exactly three pieces of Sanma fish, the accompaniments of deep-fried fishcake ball, simmered prawn and konnyaku were soggy and stone cold. The best part was really the steamed Japanese rice. 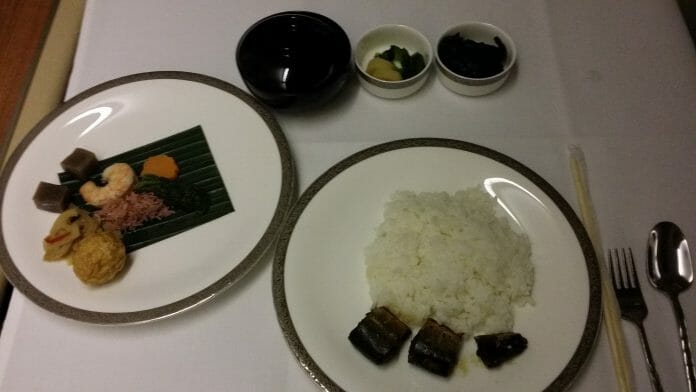 I do regret not trying the rice vermicelli noodle soup with pork balls, something that sounds a lot more Thai and should have come out better but by now I just wanted to sleep.

I ate as quickly as I could and asked the crew to turn down the bed so I could get some rest. 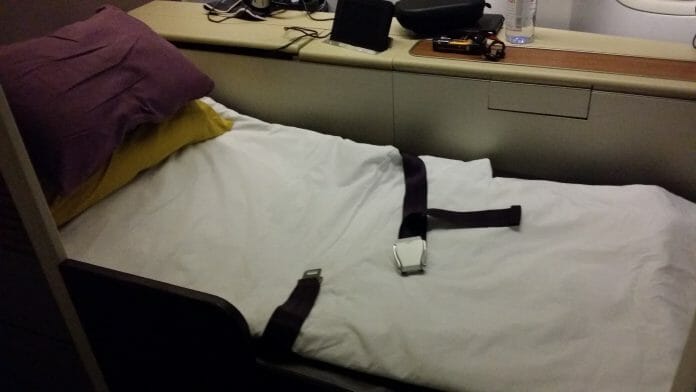 The bed is actually really comfortable. There is a special mattress pad they put on the seat and a softer blanket is provided (not the scratchy woolen one you find at the seat). With earplugs I managed to sleep about 3 hours in total. I ended up sleeping through the breakfast service (but in any case already had my “breakfast” the night before.

I think that TG’s First Class hard product is solid, although the older 747 invariably has issues of its own with engine noise, toilet quality and the disconcerting tendency for everything on the aircraft to creak when it banks. Soft product wise, the crew definitely don’t speak to non-Thai passengers as much as they interact with Thais, I’m going to put that down to a lack of confidence in English ability. But they were always available for requests.

Although TG is definitely not in the same league as the Star Alliance’s MVPs of NH and SQ (possibly a strong case to be made for BR too), it’s pleasant enough to take for short flights. I’ve never experienced long haul TG on their newer aircraft and that might be a good route to review in the future if Lifemiles availability shows up.

We landed on time in HND. I now had about 4 hours to get to NRT.

Aaron Wong
Aaron founded The Milelion to help people travel better for less and impress chiobu. He was 50% successful.
Previous article
Great one for one deal with the Visa Signature Hotel Collection (EDIT: Dead)
Next article
3 freebies for anyone booking an SQ ticket this month

[…] be sure to select an option with a long enough layover for you to enjoy this!) and then take Thai’s B747-400 First Class product from […]