Today’s flight would be departing from gate E12 in Terminal 2. This gate is at the furthest end of T2 . As with most of SQ’s SIN-BKK flights, today’s SQ979 would be operated by an A330. All of SQ’s A330s are on lease on 5-6 year terms, intended to fill the gap on medium haul capacity until the A350-900s and 787-10s come into service. That means the A330s are essentially living on borrowed time, giving them a bit of a neglected middle child feel in the fleet. The existing angled flat regional J was launched in 2009 and, in the grand scheme of things, it’s more than sufficient for a 2h 20 min flight. I firmly disagree with SQ’s decision to deploy it on medium haul red eye flights (it serves some locations in Australia and Korea), however.

I read an article by Lucky over at OMAAT about the lengths he goes to to get nice cabin photos unobscured by people. One proposed method was to have a second person bottlenecking the boarding gate while the first person sprints to the plane to snap photos. That’s a bit much for me, but today I got lucky (no pun intended) because the other passengers in J were somewhat laggy to board. 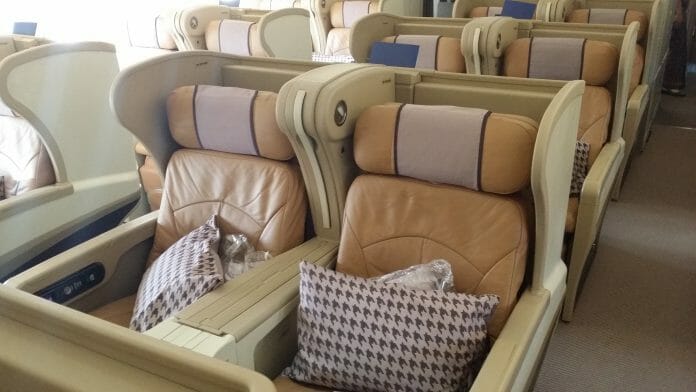 The angled flat seats in SQ’s A330s are in a 2-2-2 configuration. I lucked out and got an empty seat next to me in the middle 2. There are many reports written about the regional J seat so I’m not sure what new insights I can add. Suffice to say that this seat is much better than SQ’s original attempt at an angled flat seat (the Spacebed- read all about that interesting history here). I prefer the leather material to the fabric of the Spacebed, and the seat when fully reclined doesn’t feel nearly as slanty as the Spacebed (more on that later). 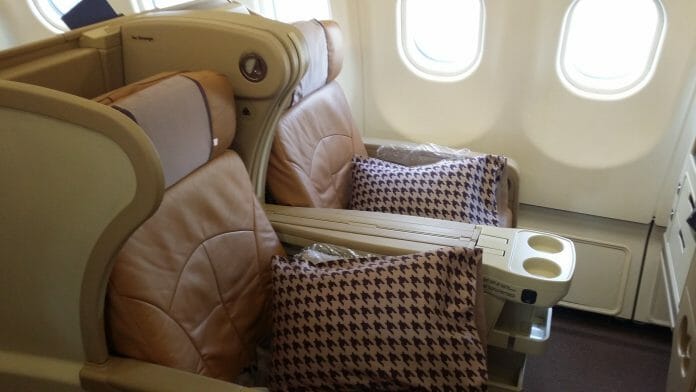 Legroom is also more than adequate. 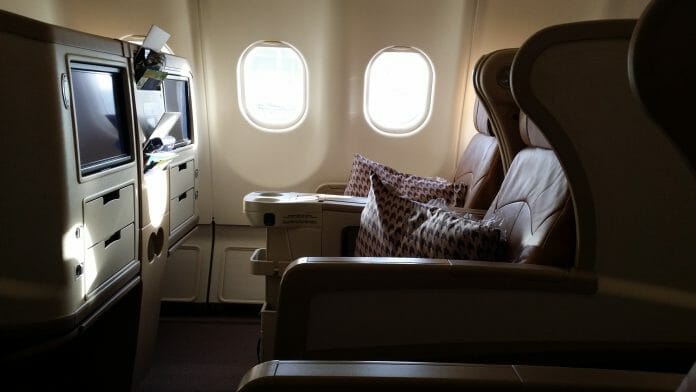 There is a large 10.6′ entertainment screen at each seat. 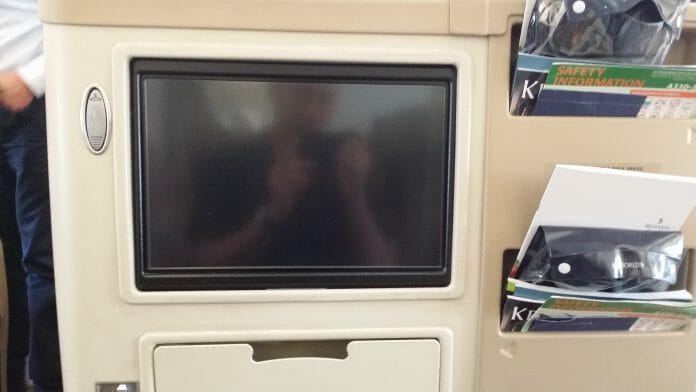 The controls are straightforward enough, but here you see signs that the product is starting to show its age (look at the gunk around the corners) As for the seat itself- you do have a privacy screen separating you from your seatmate, but if you’re on one of the 2s on the side you will still have to hop over your seatmate to access the aisle. I can imagine this being an issue if your seatmate is fully reclined. The seats themselves are perfectly fine for napping but are decidedly inadequate for a proper rest.

Pre-departure drinks were offered. I figured blowing my alcohol allowance on Charles Heidsieck knowing that there was Dom awaiting in the near future would be a bit like filling up at McDonalds before going to Jean Georges, but I still had a glass anyway. I’ve realised that SQ uses different glassware on its short/medium haul flights versus its long haul ones. In long haul champagne is served in curved glasses, in short haul you get these stumpy ones. The curved ones just feel nicer to hold somehow, the stumpy ones feel cheap.

The headphones on offer are the usual Phitek noise cancelling ones. They offer decent performance and are the same type used in SQ’s premium economy. Priority immigration cards were also given out. I didn’t need one but took it anyway for next time. By right they’re supposed to put a date on this so it can only be used on that day but nothing was there and I doubt immigration checks. 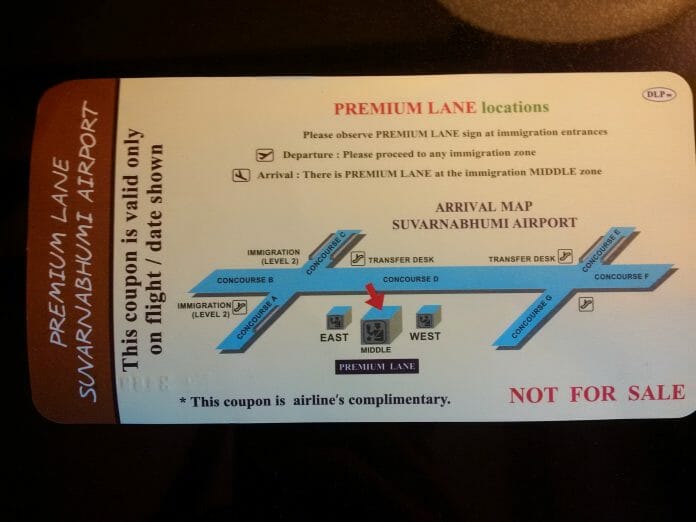 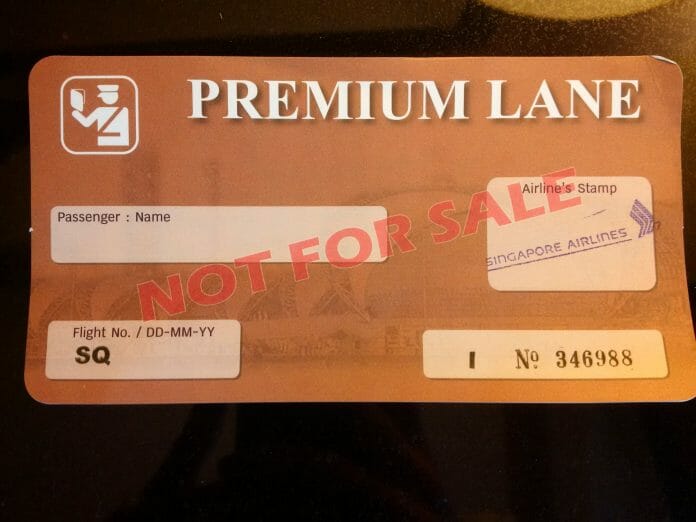 Menus were handed out for the dinner service 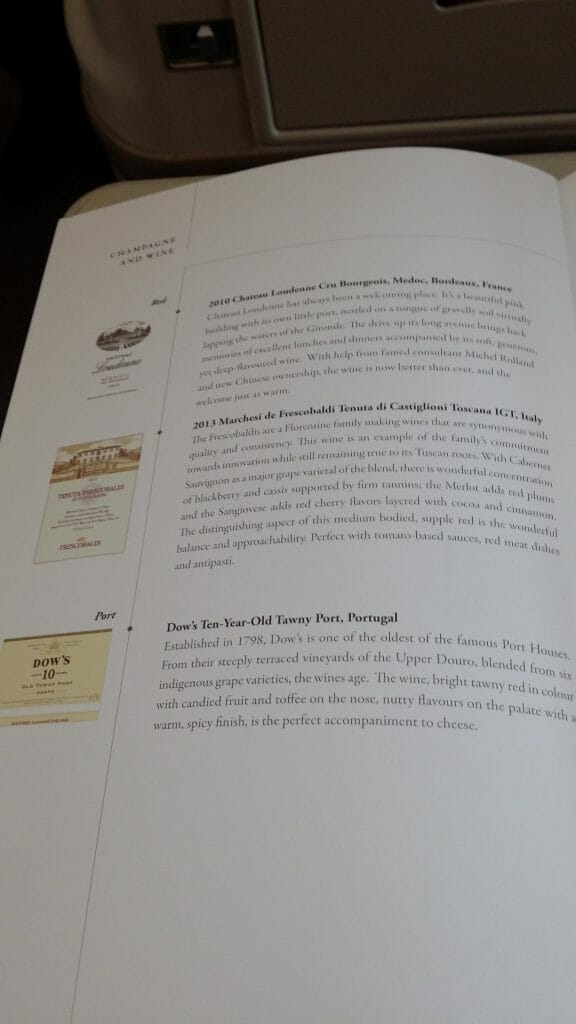 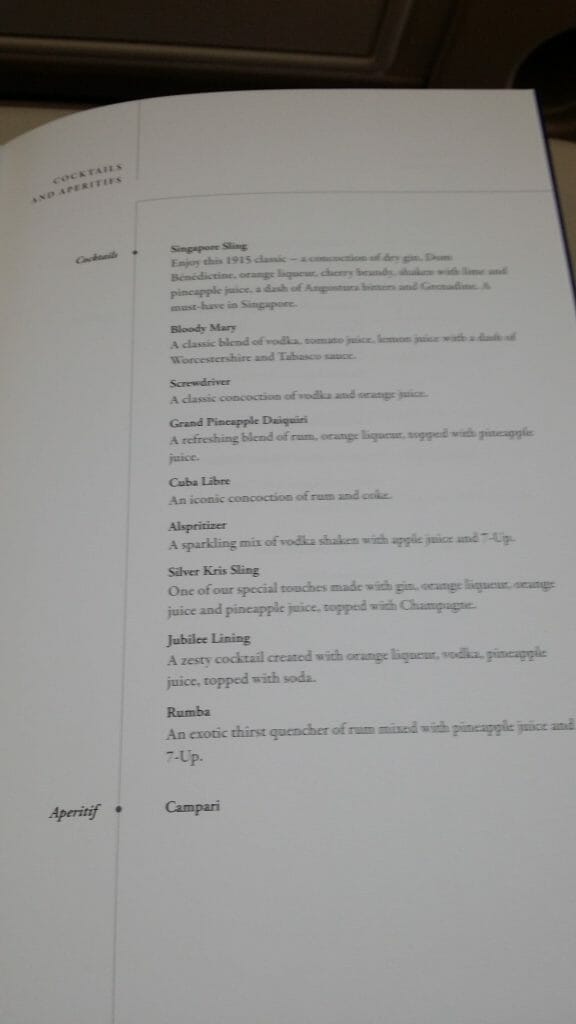 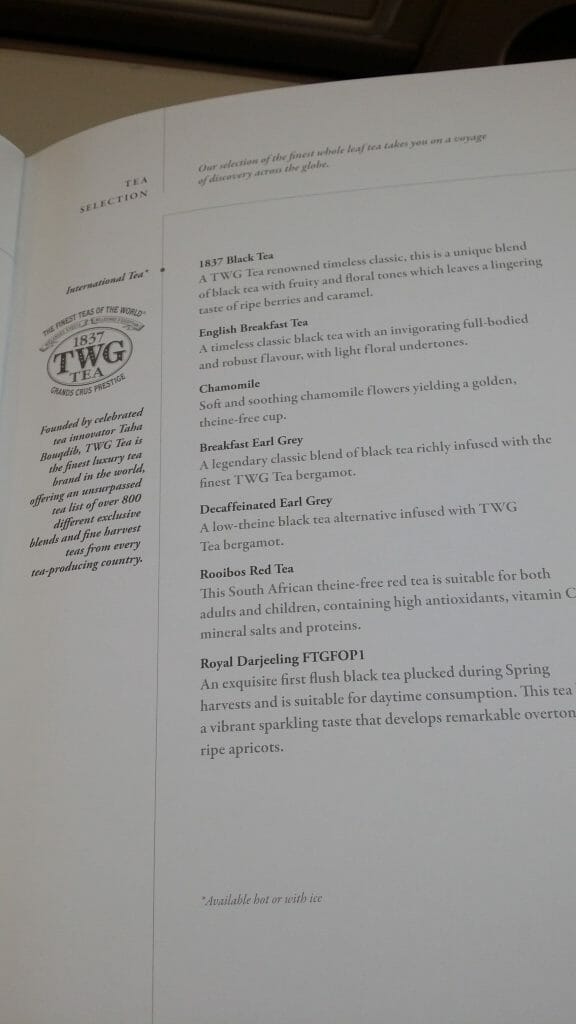 I ordered the Steamed Cod Fish Thai Style from the Book the Cook menu and was pleasantly surprised.

Fish is generally hard to do right on airplanes because it tends to get nuked, but the cod here was tender and moist. I suppose it’s got something to do with the higher fat content. The entire meal was served on a tray instead of course by course, which is understandable given the time constraints. In any case, the rest of the meal was forgettable. I think a lot of airlines could save money on the dessert budget by just giving ice cream and we’d all be a lot happier.

There is 1 toilet at the rear of the business class cabin which somehow seems inadequate for a cabin of 30 passengers. At least that’s what SeatGuru tells me. I can’t remember if there was a second one at the front of the cabin because that would make the ratio 1:15, more in line with that which we see on SQ’s other planes. Anyone remembers this? The loo has amenities by Miller Harris. Nothing was available in the amenities drawer, though I imagine the crew would have a few toothbrushes handy if you needed one. 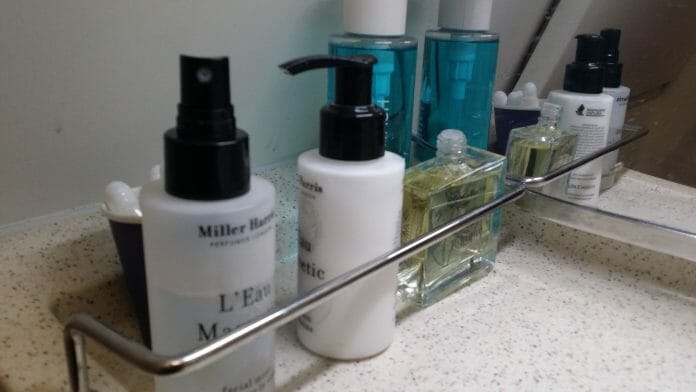 Afterwards I put the seat full flat to take a quick nap before we landed in Bangkok.

My overall thoughts on the regional J product- it’s perfectly serviceable but I’d be very interested to see what SQ has in store for its medium haul routes when the A330s are phased out. Will the 787-9/10s have SQ’s long haul cabin product? Or will SQ go for another more density intensive 2-2-2 layout? If they do, will all the seats be full flat or angled? So many questions. 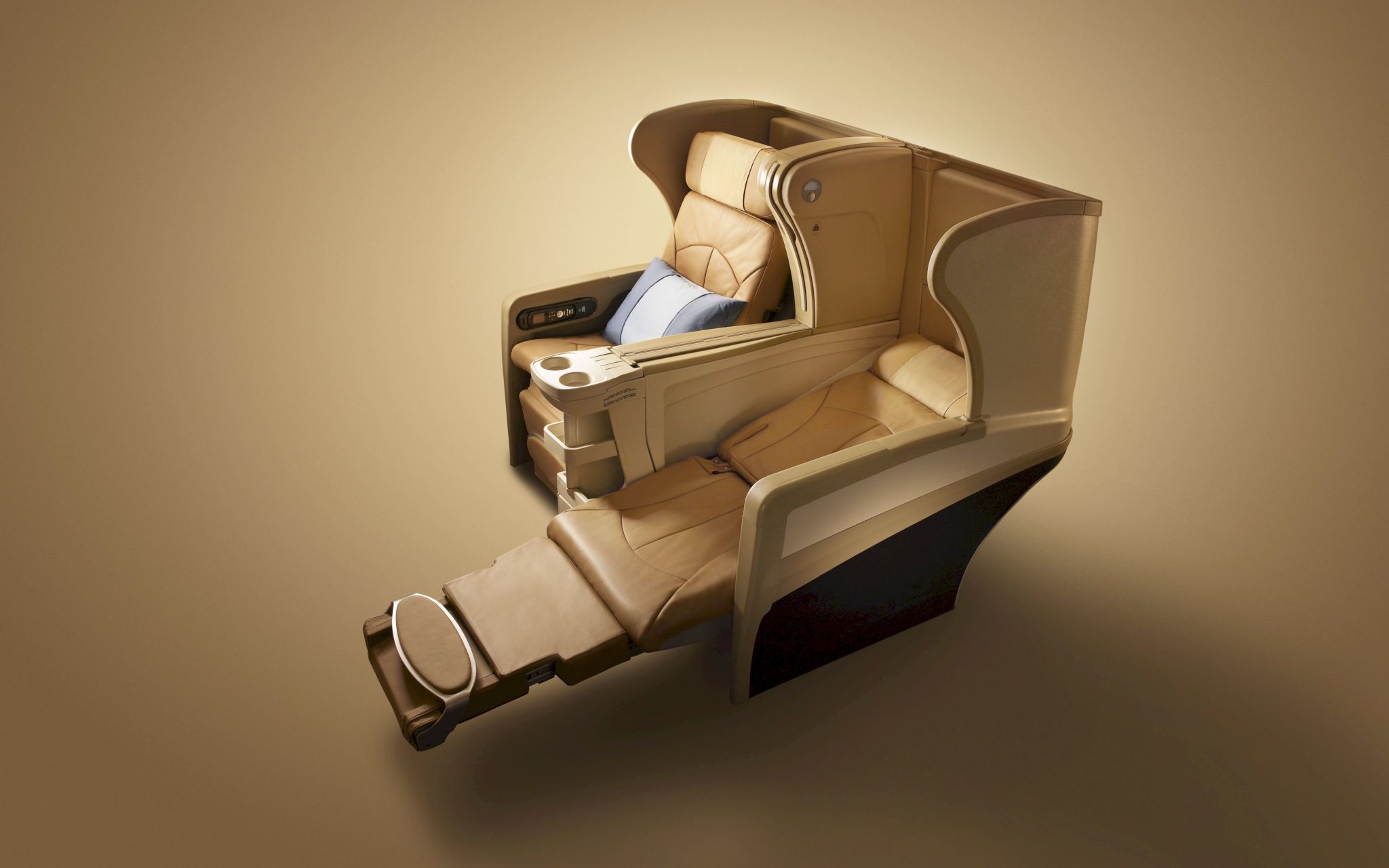 We landed on time in BKK and I was already making plans to sprint to the Thai Airways spa. Fortunately, there was something waiting on arrival that made exercise unnecessary…

Aaron Wong
Aaron founded The Milelion to help people travel better for less and impress chiobu. He was 50% successful.
Previous article
The Milelion Directory has been updated for September
Next article
Remember to get your free $68 AirBnB credit

This soft product is fine for short-haul flights of less than four or so hours (HKG being about the maximum), but incredibly uncomfortable on “regional” red eye flights to India, mainland China and Australia.

SQ really needs to step up their game in terms of hardware in business class. Even the long-haul fully flat product is starting to feel very dated, and is not particularly comfortable being a defacto reverse herringbone product with non-angled seats. Unfortunately the “mk II” version of the long-haul seat is hardly an improvement.

you know the amazing thing is there was this one flight where a J passenger requested an empty row of 4 in economy (2-4-2) because that at least let him lie out full flat. I thought he was crazy at the time but now that i think about it…

Even with dated products they could at least clean the console properly!

I tried SQ Business Class for the first time this year and am very impressed with the product and service. Over the past few months, I have flown in A330, B777-300ER, and A350. From my experience, I enjoyed the A330 Regional Business Class seat more on shorter flight because it reclines more. SQ Long Haul Business Class seat is great in sleeping position (flip the seat over), but it cannot recline much when I want to watch movies or just lounge. That is just my 2 cents. I haven’t tried the A380, so can’t comment on that seat.

i’d be very keen to hear more about your a350 flight. been hankering to try one of those ever since they came online. i agree that the sq long haul product has fewer lounging positions (the a380 will be exactly the same as any aircraft with the 2006 long haul J product). that said, the regional business class seat doesn’t have any of the privacy that the long haul product does.

For A350, the hard product is the same as the business class seats on B777-300ER. There are some minor differences in the cabin: no First Class section, windows are slightly larger, and I believe the overhead compartments are slightly bigger. The IFE is more advanced because you can link it to your own device. SQ is testing this plane on certain regional routes. In my case, I flew on A350 recently from Singapore to Hong Kong on SQ890. The flight attendant mentioned that they will start flying A350 to Japan very soon. I also know that SQ962 (Singapore to Jakarta)… Read more »

English is not my first language, evidently.

Aaron,
how did you manage to mix J class with F class on the same multi leg itinerary ? I noticed all but one (SIN-BKK) of your international sectors were in F.

I just flew J class yesterday SIN-ICN in one of the A330 planes. The were 2 toilets at the rear of the cabin. Being a 6+hrs daytime flight I find the seats comfortable enough. I flew the long haul B777 early this year in J class too and yes the full flat seats were great and more spacious but I much prefer the angled flat for short haul especially if I don’t intend to sleep for a daytime flight.

thanks for the heads up- i could have sworn something was wrong with that seatguru diagram. I generally think angled flat is the spawn of the devil, but yeah it offers better lounging positions than the long haul J seat. Perhaps the nice inbetween is a full flat seat that you don’t need to flip over?

Oh yes a full flat with no flipping will be great cos I still don’t like to ask for help getting in and out of a fully flat seat position. By the way I love your blog and the useful tips you gave. I just used lifemiles to get my Sin-Icn-Sin tickets and so far except for the inconvenience of having to call customer service to use the Book The Cook service everything else just works like a paid ticket. Great job!

glad to hear it! hope you got the long haul J instead of the a330

it is really pathetic they dont clean the console or do minor touch ups. i’ve seen some really grimey ones. they could just rip the button cover off and stick a new one on.