United Airlines is perhaps the only airline that is capable of generating such a strong emotional response in people. And with publicity like this, who needs Madison Avenue? What is there to be said about an airline that has been called, with varying degrees of hyperbole, the worst airline ever, whose CEO has come out and said in so many words sorry we’re so terrible, which is edged out only by ultra low cost carriers Frontier and Spirit at the bottom of customer satisfaction scores? Does an domestic economy flight that takes roughly 90 minutes even warrant a trip report?

Of course it does!

United operates a wide body 767 on this domestic route, which, if you’re a frequent domestic flyer in the States, is a rare sight. Almost all domestic routes, even supposedly high traffic ones like LAX/SFO-JFK/EWR are operated by A320/321s or 737s. But ORD-EWR seems to be operated by a 767-300 more often than not

These aircraft are some of United’s oldest. As per Airways News

There are 35 767-300ERs in United’s fleet.  The 21 three-cabin 767-300ERs were slated to be retired soon, but United announced that it will keep them and reconfigure them into its two-class configuration. At the moment, it is not known when the conversion process will begin.

So we basically have an aircraft that United at first intended to mothball, then changed their mind because even a dead horse can move if you push it hard enough.

Here’s the shot of economy- a 2-3-2 configuration. The flight was completely full in economy. 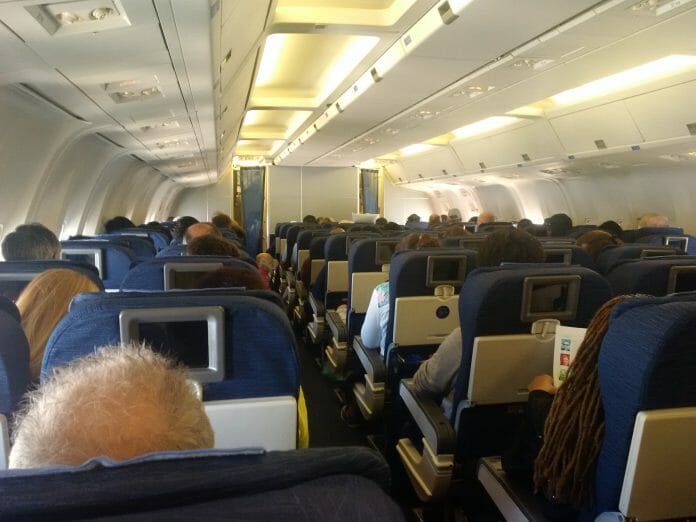 Note the seatback TV screens and tell me that doesn’t awaken nostalgia in you. 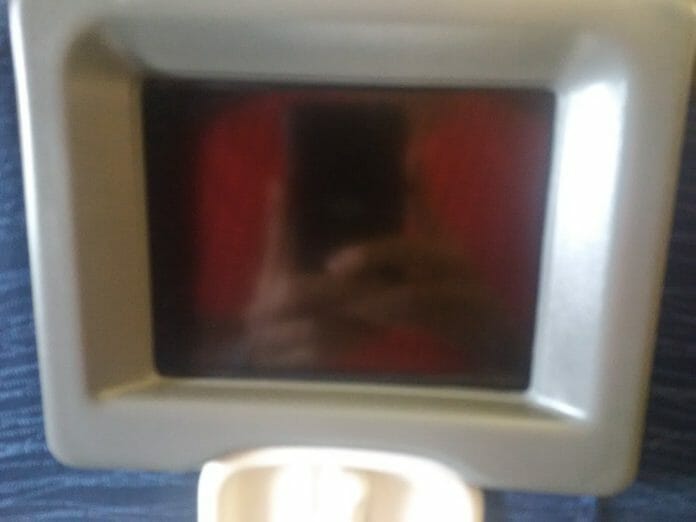 No? Look at the seatrest arm controls and tell me that doesn’t awaken nostalgia (and hypochondria) in you. 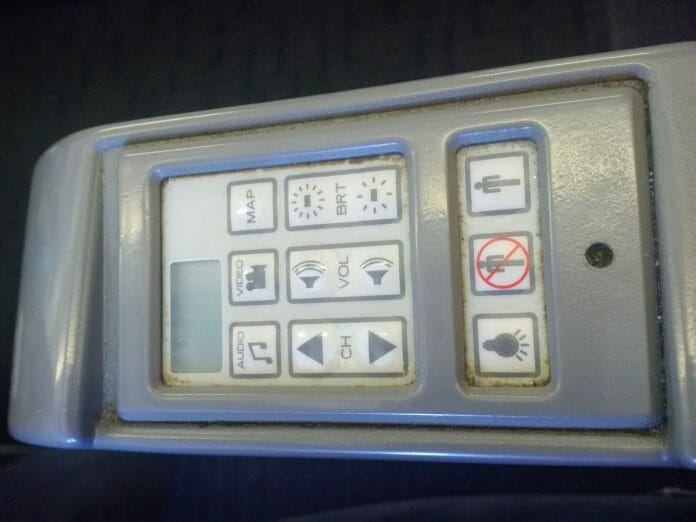 Now, today’s aircraft was being used on a short haul flight, but United still deploys 767s on long haul routes like IAH to GRU. The thought of doing a long haul economy flight with this is not exactly appealing. 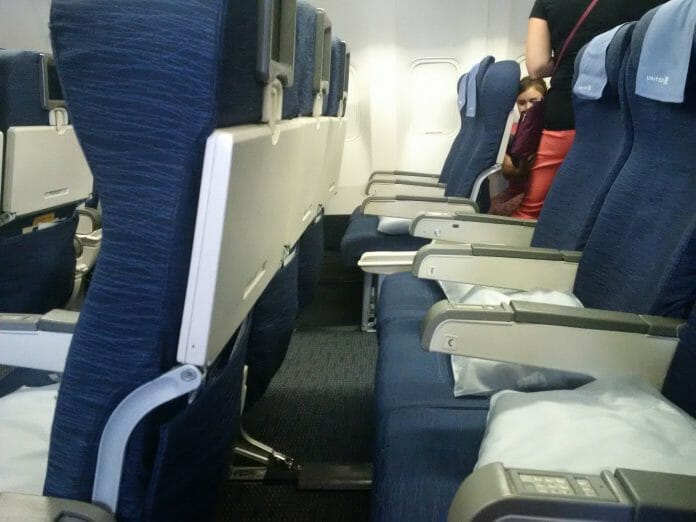 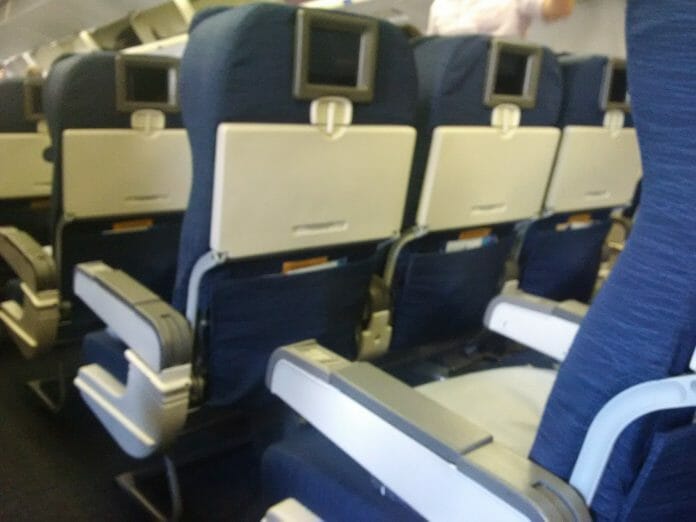 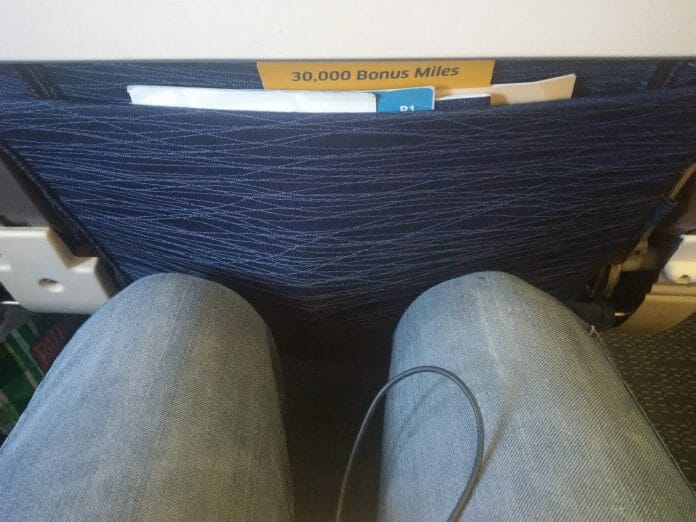 At just shy of 1.8m, I’m not exactly towering over the average American. So if this is my legroom situation, pity the six foot guy who doesn’t buy up to Economy Plus.

The flight itself was a non event. The most amusing part was probably the pre-flight safety video that was played once, stopped halfway through because the audio cut out, then played again with the Spanish soundtrack instead, then eventually given up on altogether, the flight crew presumably assuming we’d gotten the gist of it. United’s safety videos are still miles better than SQ’s though.

We took off. The captain turned off the seat belt sign. Some people got up to use the loo. Others got up to stretch. Still others tried to medicate themselves into a peaceful oblivion.

The flight attendants came by with pretzel snacks. They were free of charge. They made me thirsty. Complimentary water and juice were available. 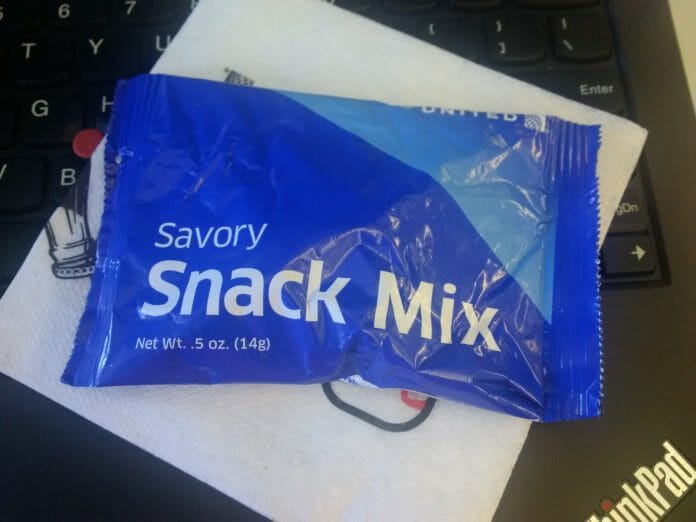 The flight landed safely. The crew mumbled something along the lines of “we know you have a choice in air travel and we thank you for choosing us”. Everyone in the cabin tried to avoid eye contact when disembarking, knowing very well that we had no choice in air travel. My bag arrived on time.

Of course when you’ve just stepped off a flight as amazing as ANA’s First Class, everything else is going to be a massive step down.  And the flight wasn’t bad by any means, it was just a timely reminder of why we go into the miles and points game in the first place (yes I wouldn’t have redeemed business class on a short haul flight like this but can you imagine the poor s.o.bs who have to do this aircraft in long haul economy?)

When you fly US domestic, your loyalty is really to price more than anything else. As poor as the product may be, you can’t really argue with the fares (at least on routes where there’s a good amount of competition). Especially if you’re flying in economy, there really is no good point of differentiation among carriers. Heck, if not for my Star Gold status I’d even consider flying with Spirit seeing how I need to pay for a bag anyway.

In any case, I was in New York City now, and that meant heading on over to the US open…

Aaron Wong
Aaron founded The Milelion to help people travel better for less and impress chiobu. He was 50% successful.
Previous article
Krisflyer partners with Shangri-la to offer reciprocal benefits
Next article
The First Class Premium on Other Airlines