A review of Ethiopian Airlines' B737 business class experience.

It was now time to end the Africa segment of my RTW trip and head across the ocean to South America. Connectivity between the two continents isn’t what you’d call seamless, but Ethiopian Airlines operates a 5 times a week flight between ADD and GRU. This, however, meant we’d need to wake up at 3 in the morning to board a 5 a.m connecting flight from NBO to ADD. Ah, the glamour of business travel.

To maximize sleep, I checked into the Four Points at Nairobi Airport. I’m not going to write a full review, but I’ll just say that this was an incredible place to stay. It’s within the airport grounds and 3 minutes from the terminal, it’s barely a few months old and everything is spanking new, and the staff were fantastic. Here are a few photos from the property- the highlight is the rooftop bar where you can have a drink in the pool while seeing planes landing.

NBO airport was completely dead at this early hour, and we had time to poke into the Kenya Airways lounge for a bottle of water before heading to the plane. As it turns out, NBO does security at the gates, so my unopened bottle of water got tossed in the bin. The circle of life continues.

The last time I was scheduled to fly on an Ethiopian Airlines B737, a last minute aircraft swap saw me getting on a Q400 instead, which was still quite the novel experience. There was no such shenanigans this time, as we exited the warm terminal onto the windy tarmac and started walking towards the waiting 737.

I managed to grab this shot before I boarded the plane.

Ethiopian has 16 seats in business class (or Cloud 9, as they call it) arranged in a 2-2 configuration. The seats are your usual recliner ones. They looked quite tired and old, with wrinkled leather headrests and saggy cloth in some places. 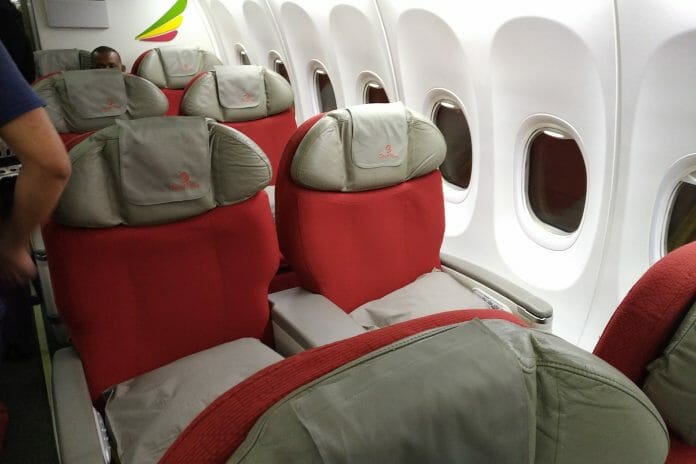 The seats have leg rests, but after years of use and abuse they don’t hold their position very well and tend to collapse when you put any weight on them. 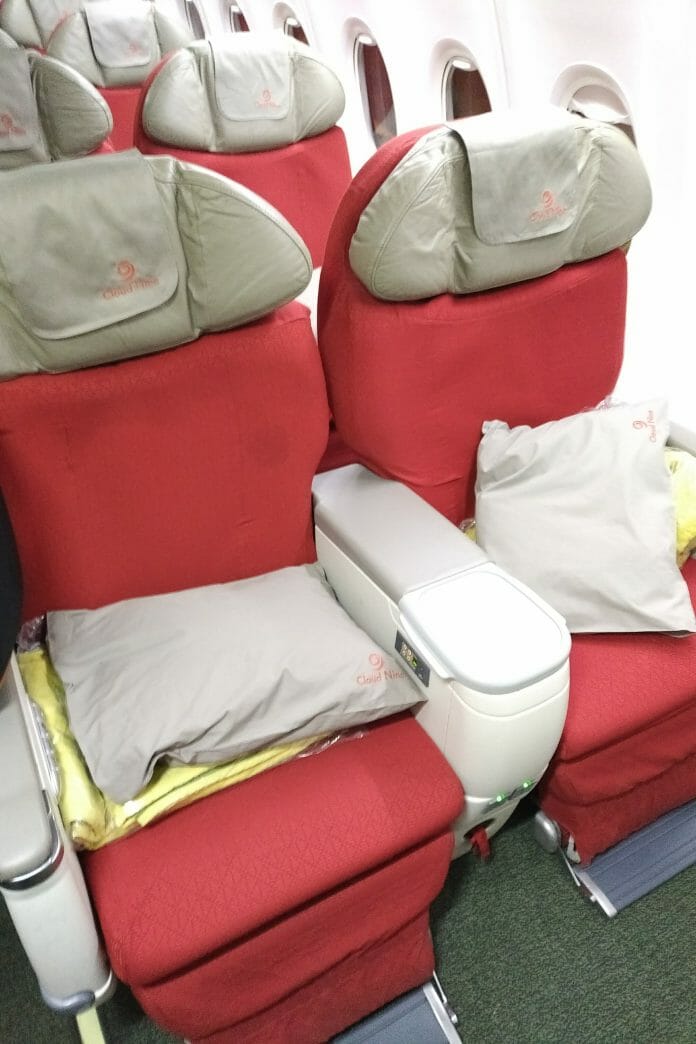 Legroom was more than adequate- even when the person in front of you fully reclined you could easily slip in and out from your seat. In any case the business class cabin went out half empty.

There was no personal IFE on the flight, but you did have these old style in-seat controls that you could use to watch the movie on the overhead screens.

The seat controls were quite the throwback. To think, we once upon a time needed to use manual exertion to move our seats. What savages we were.

Even at this early hour the crew were offering champagne as a welcome drink. They went around with a tray of orange juice, a bottle of Champagne Lallier and empty glasses. No one else in the cabin went for champagne but me, and a few seconds later I heard a pop in the galley and a glass materialized at my seat.

I ended up having only the one glass, so it’s quite a thought that Ethiopian didn’t mind opening an entire bottle just for one passenger…

We took off on time and the crew started preparing breakfast. Even though the flight was only 2 hours long, proper menus were distributed (the intra Africa business class experience is clearly superior to its intra Europe companion!)

My tray table took a lot of coaxing to get out of the armrest, as the mechanism that was supposed to guide it out had jammed.

The meal itself was passable, considering the circumstances. It was strange that they gave me a glass of hot milk for the cornflakes. Maybe it’s a local thing. 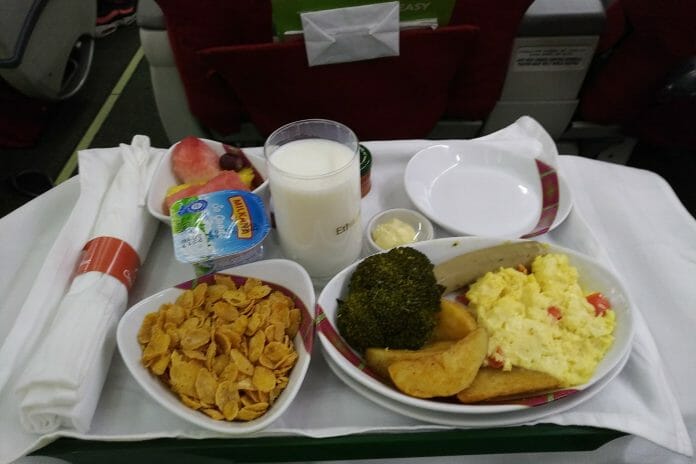 Communal IFE is always an interesting dynamic because you need to pick a show that doesn’t alienate/offend certain passengers. Most airlines err on the side of caution here and show family-friendly/animated romps on the overhead screens. No 50 shades, that’s for sure. Ethiopian elected to show the Lego Ninjago movie. I quite liked the original Lego movie and the Batman spinoff, but this one was a real stinker.

I guess if you want to say something good about redeye flights, it’s that they reward you with spectacular views like this if you keep your eyes peeled…

It’s not winning any marks for luxury, but the product on offer was good enough for a short 2 hour hop. Quality airlines are in scarce supply in Africa, and it says quite a bit that Ethiopian proudly trumpets the fact that it’s a Skytrax Four Star airline. If you need to connect within Africa, this is probably as good as it gets.

Aaron Wong
Aaron founded The Milelion to help people travel better for less and impress chiobu. He was 50% successful.
Previous article
Chope offering “pointsback” promotion; get bonus Chope Dollars for making a redemption
Next article
Should you use a miles card for petrol spend?

It might sound odd, but in a few places (especially India) its quite common to use hot milk with corn flakes.
If you have time, you can read about a marketing lesson on this…
https://www.translatemedia.com/translation-blog/how-kelloggs-failed-and-then-won-in-india/

learn something new every day. thanks for the link!

“I ended up having only the one glass, so it’s quite a thought that Ethiopian didn’t mind opening an entire bottle just for one passenger…”
I guess the crew ended up with the remaining bottle, happily. And did you flash yourself at passing airplanes at the rooftop pool?

pls. we all know that you can’t have high rise structures near landing strips.

This is the first review of yours I’ve read, and I am an instant fan. Your witty, self-deprecating prose tells the story well, and your evaluations of the various aspects of the product appear to be balanced and spot-on. I’m looking forward to reading more.