The Westin Berlin is an entirely decent, if dated, place to stay.

As I mentioned in my Cosmo Hotel trip report, the plan for Berlin was to shuttle between the Cosmo and Westin in order to max out the 1,000 bonus points per night offered under the SPG Q4 2017 Earn More promotion.

The place has quite a storied history, if you want to read its Wikipedia article.

The site is the former location of the Kaisergalerie shopping center, opened in 1873, destroyed by an air raid in 1943, and demolished in 1957. The site remained vacant until the East German state-run Interhotel monopoly decided to build a flagship luxury hotel for Western tourists in the 1980s. The structure was designed by a collective of architects headed by noted East German architect Erhardt Gisske in the style of early twentieth century luxury hotels, and with a glass dome modeled on the one in the former Kaisergalerie. The East German government hired the Japanese Kajima Corporation to manage the building of the 200 million mark structure, and Kajima in turn subcontracted the construction work to the Swedish Siab construction company. The hotel was opened as the Grand Hotel Berlin on August 1, 1987 by East German leader Erich Honecker as part of the city-wide celebrations of the 750th anniversary of the founding of Berlin. It was only open to foreign guests, as it did not accept East German Marks, only Western hard currencies.

Following German unification in 1990, the hotel, along with other East German state assets, became the property of the Treuhandanstalt, a German government agency set up to privatize such properties. It was managed by the German Maritim Hotels chain and renamed Maritim Grand Hotel Berlin. The hotel was eventually sold, along with a number of other former Deutsche Interhotels properties, and renamed The Westin Grand Berlin on July 1, 1997.

If you come in expecting modern glass and minimalism you’re going to be sorely disappointed. This place is solid Eastern European Iron Curtain grandeur. 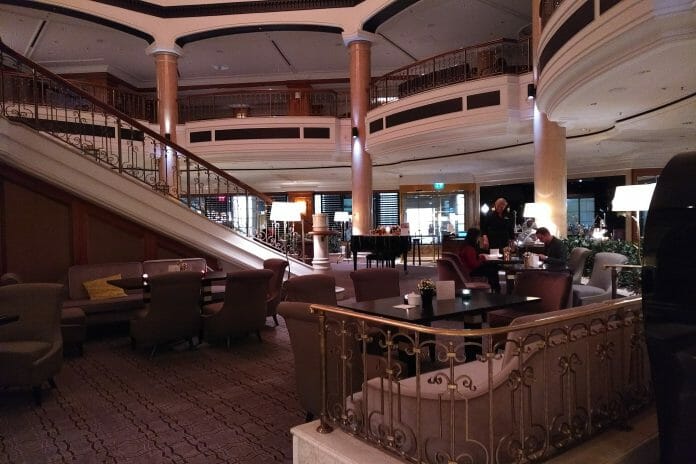 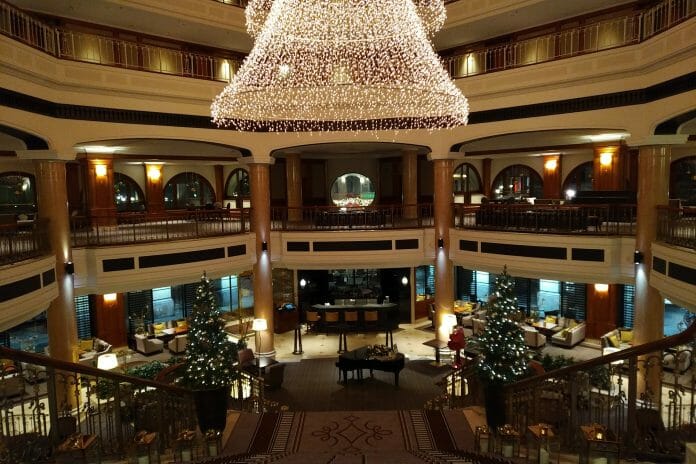 At check in the staff upgraded me to a room on the 7th floor, the top floor of the hotel. Although this is a huge property, there are only about 10 or so rooms on the 7th floor so I guess that’s something. They noted my corporate rate already included breakfast and gave me 500 points as the Platinum amenity. I’m saving up for one big splurge trip to the St Regis Maldives, which is on sale at 58,500 points a night until 5 March 2018 this year (but historically they’ve always extended the promotion). 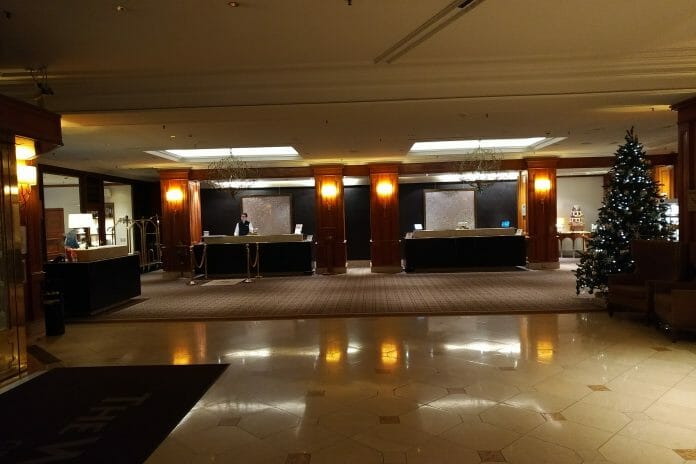 After I got my key I headed straight to the 7th floor. They still have those old timey lifts which have the pointer on top indicating what floor the lift is on. I half expected to run into a femme fatale at this rate. 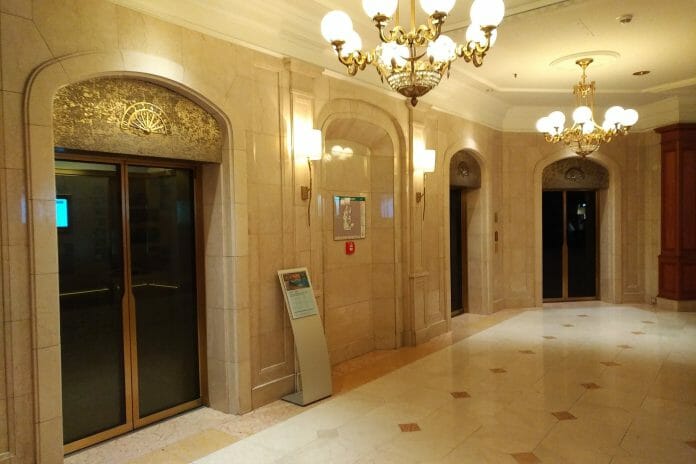 You get a great view of the lobby from the top floor- the Christmas tree lights are still up. 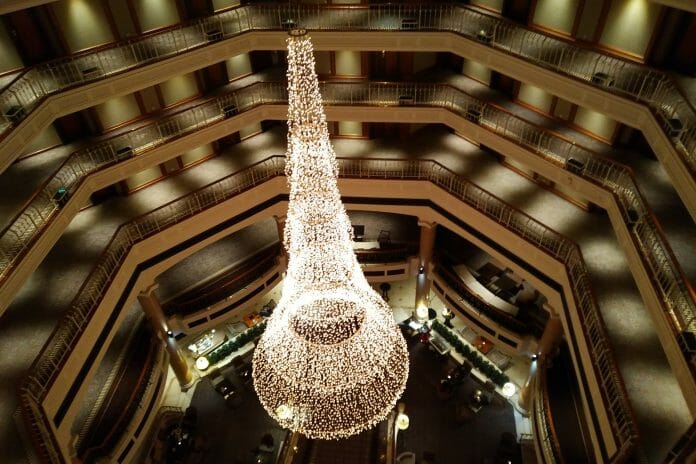 My room was larger than standard rooms but there was really nothing too fancy. Think standard Westin getup- Heavenly bed, Heavenly bathrobe, Heavenly Spa toiletries. 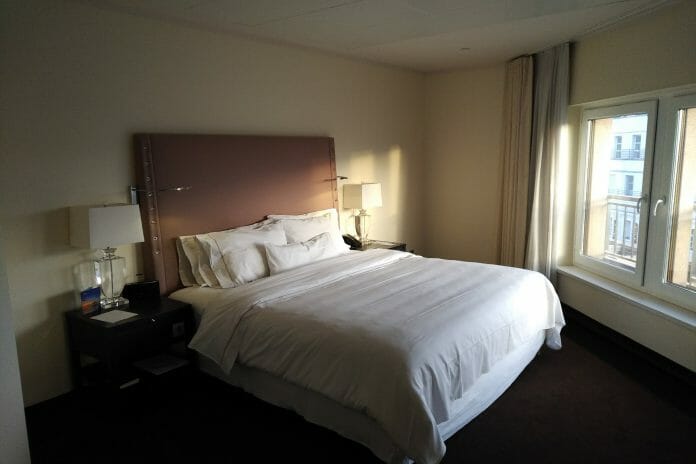 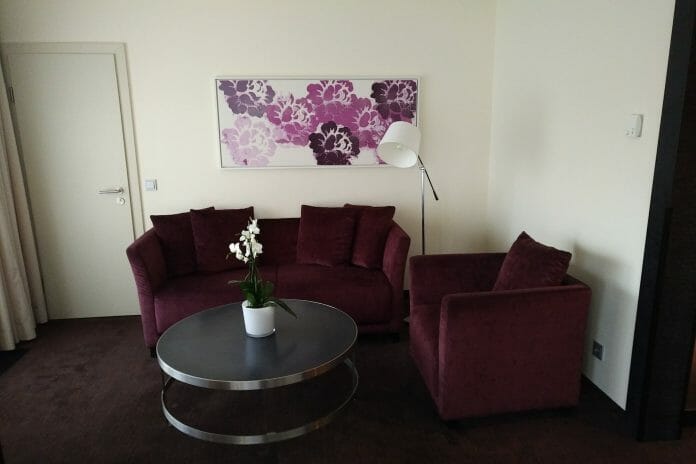 There was a large work desk with a Samsung Tablet, but the purpose of the tablet seemed to be more for upselling spa and dining services than actual productivity. 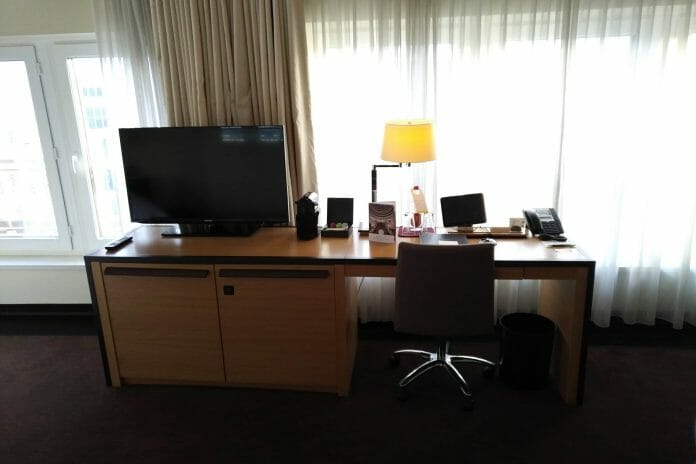 I’m constantly disappointed that business-focused hotels like Westin don’t invest in universal plugs and USB charging outlets at desks. It surely wouldn’t cost much, yet would bring a lot of benefits to customers. 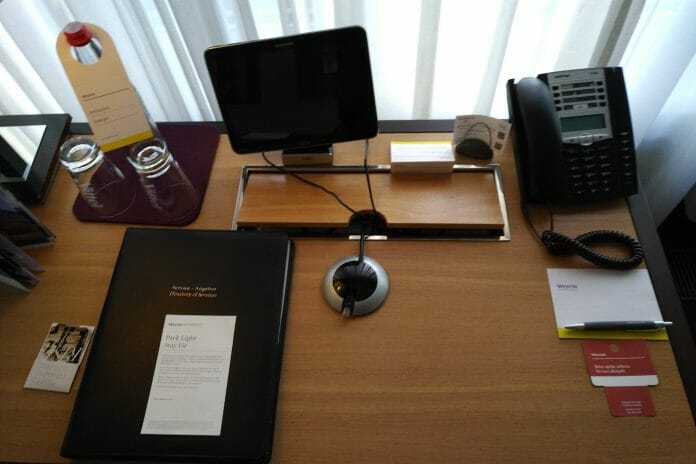 The bathroom had lots of counter space, but surprisingly no bidet again. 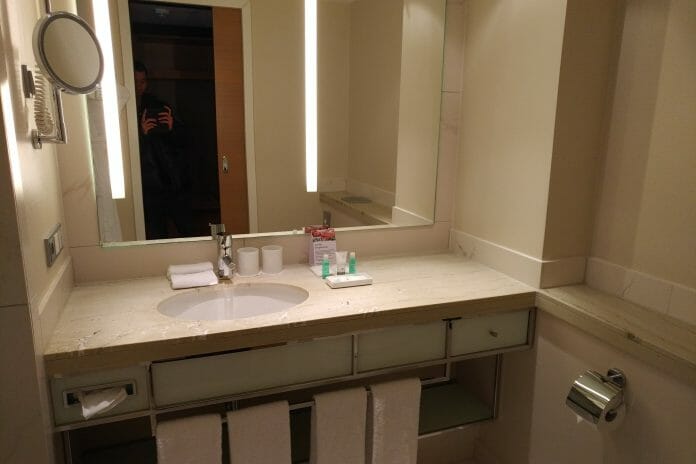 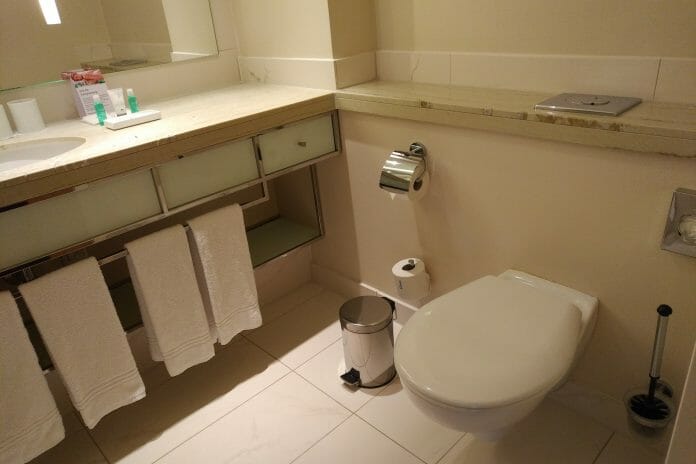 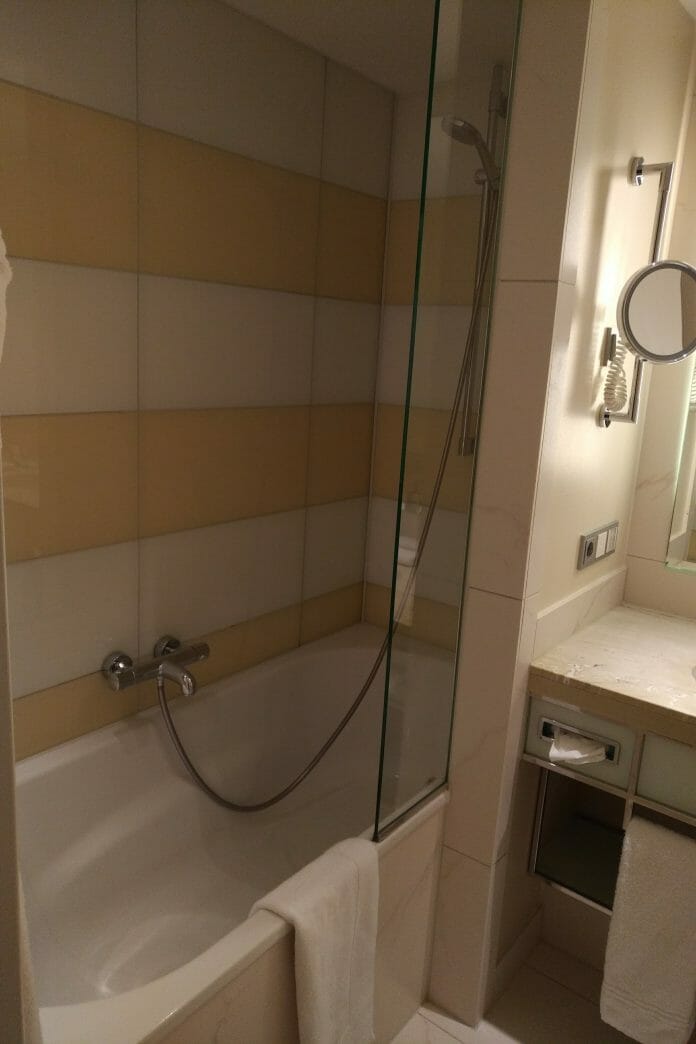 After getting some work done, I went to explore the rest of the hotel. Even though it was the dead of winter, I was looking forward to a swim in the heated pool. That turned out to be a miserable lie- the pool was certainly not heated. It wasn’t freezing either, but it was regular swimming pool water. 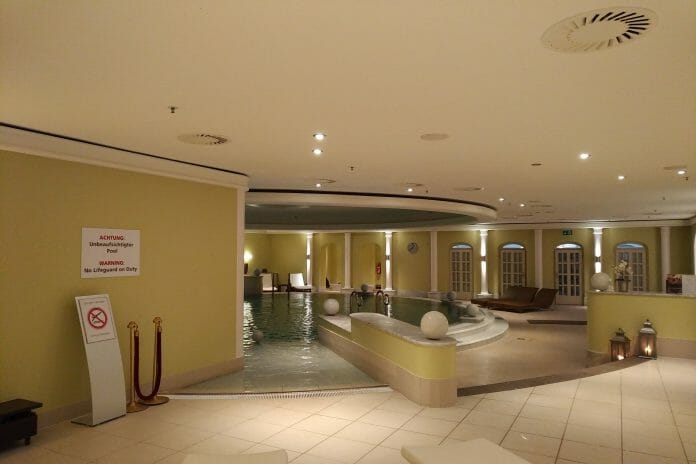 I flopped around inside like an unenthusiastic lover and finished early. Read into that what you will. The hotel also has a gym with several treadmills and weights. 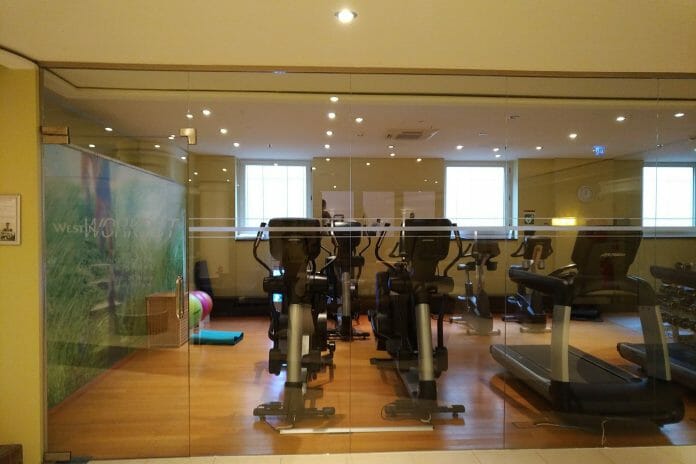 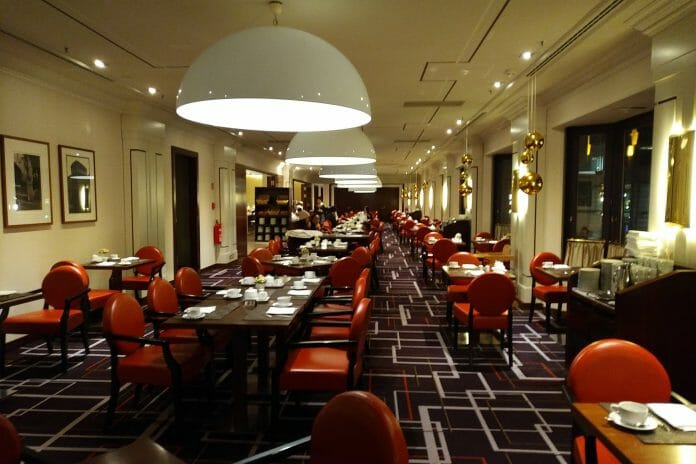 The selection here was much bigger than at the Cosmo, with several hot items, the usual breads and cold cuts, fruit, cereal, and made to order eggs. 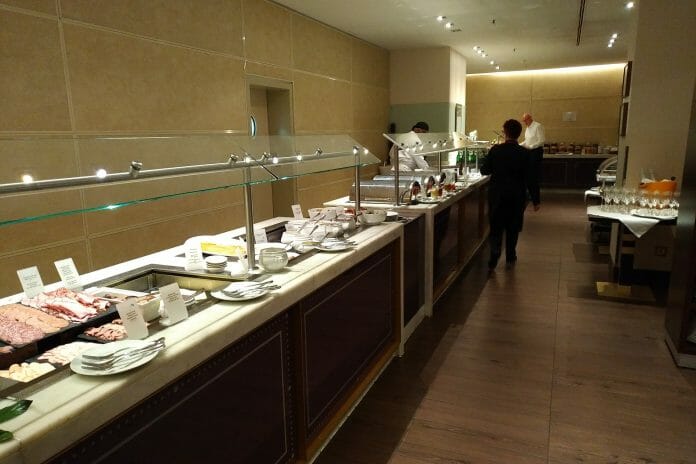 I’ll let the photos speak for themselves. I did love the large variety of preserves. The Germans really love their jams. 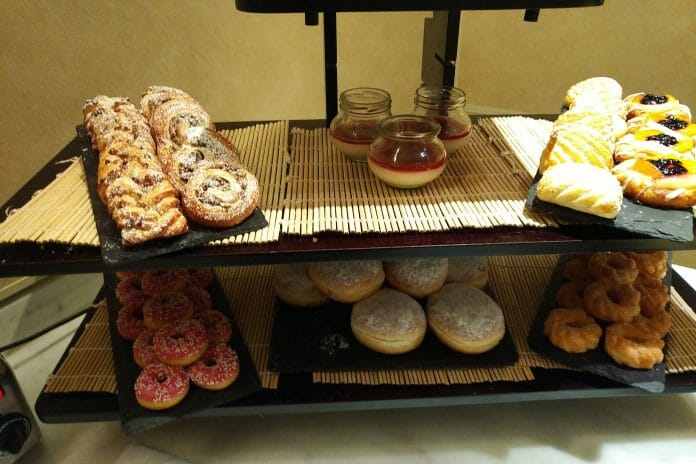 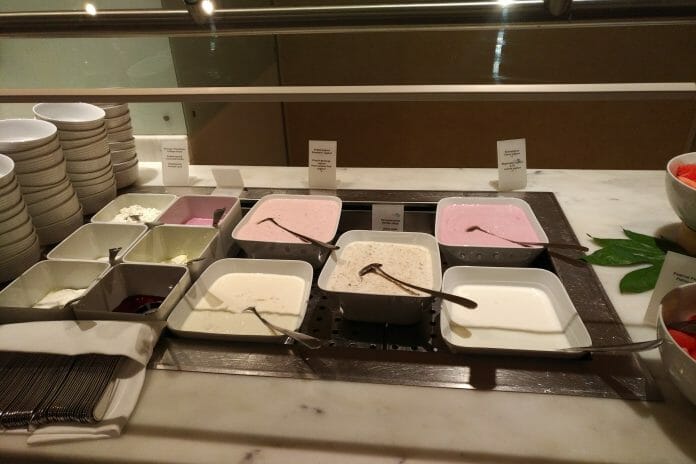 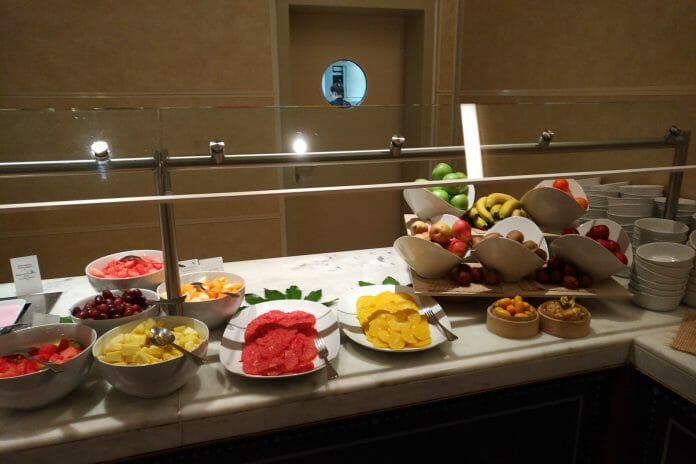 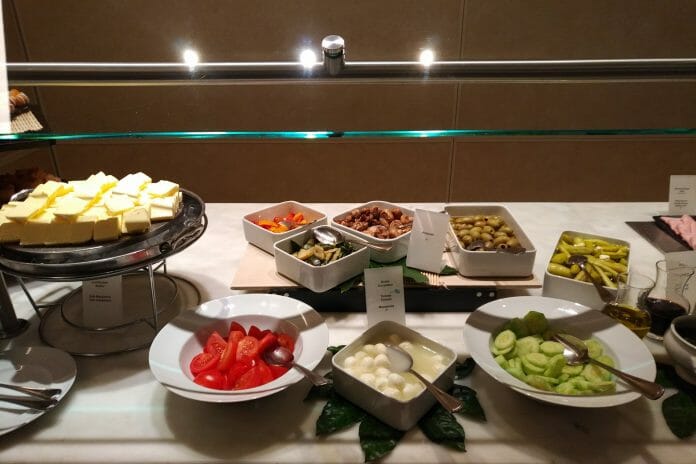 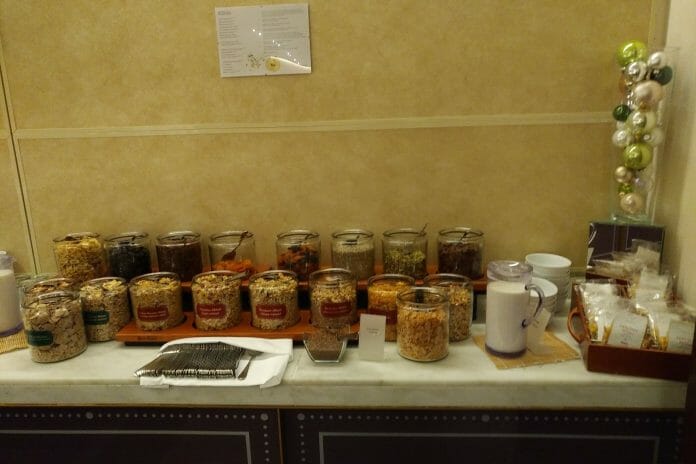 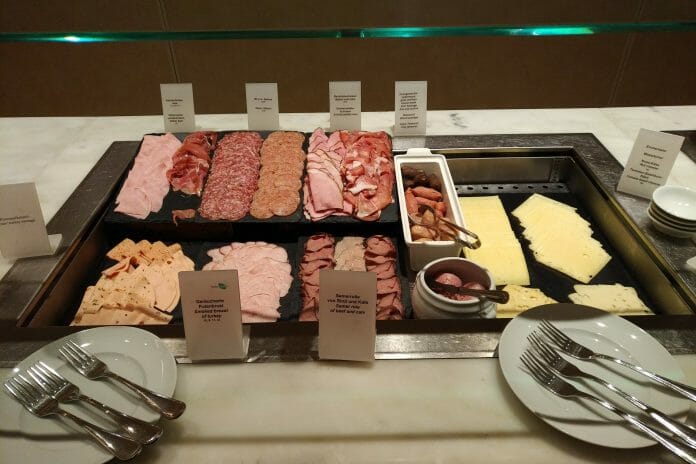 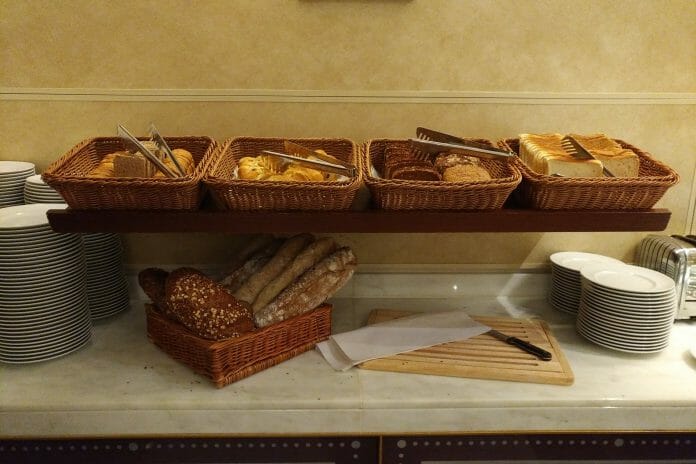 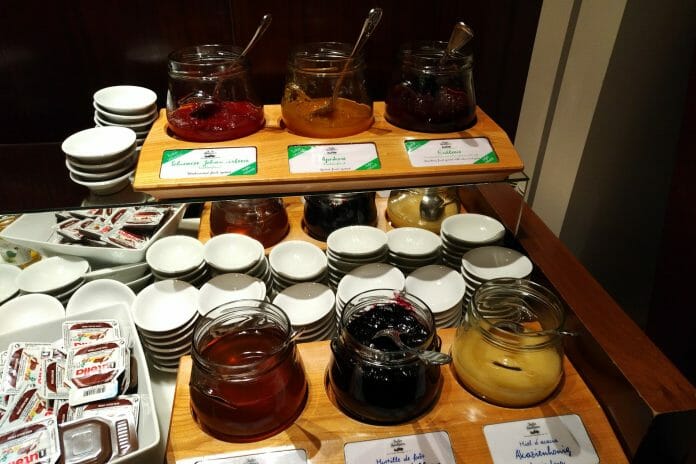 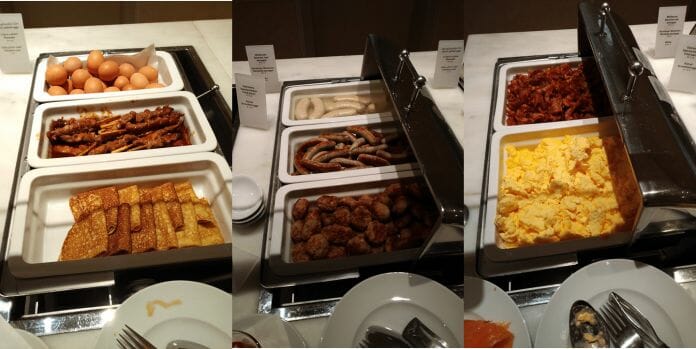 The best part? They had sparkling wine at breakfast. 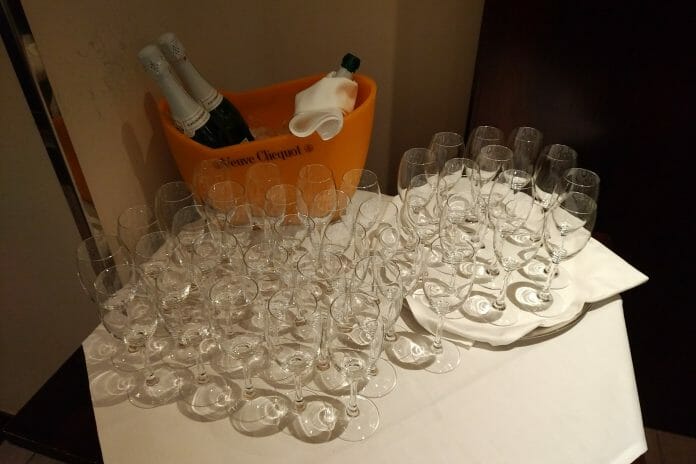 The worst part? It tasted awful. I tried mixing it with some orange juice which improved it somewhat. 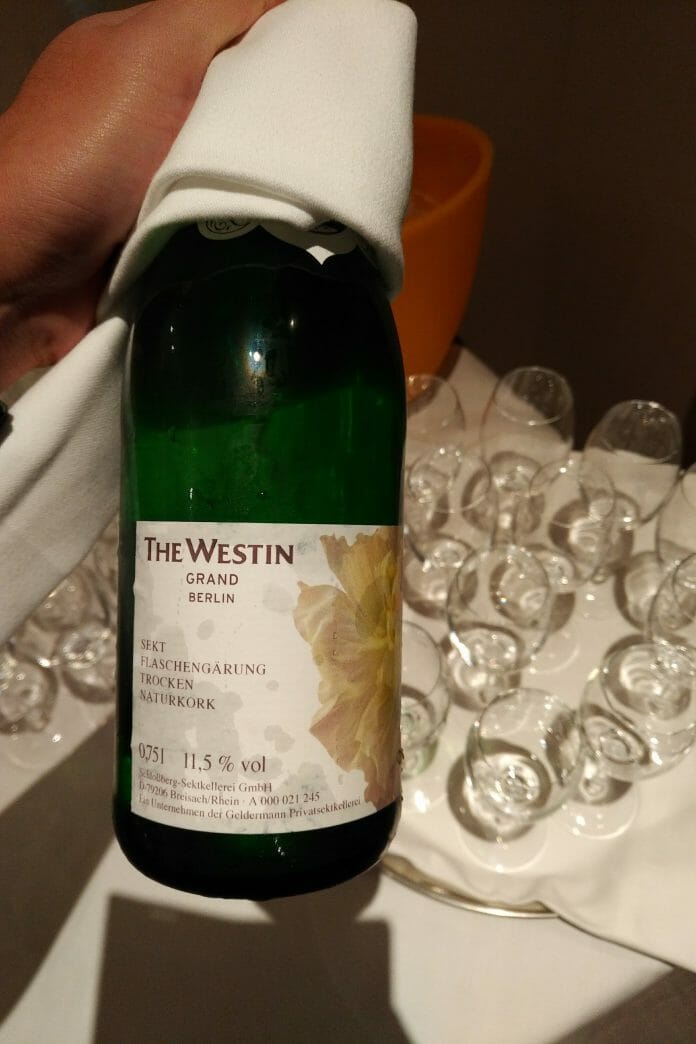 Europe for me is a bit schizophrenic when it comes to breakfast. The English love theirs hearty, the Spanish barely touch it, the Germans…well I imagine in the hotels they try to cater more for the tourists, safe to say that no one beats Asian hotels for breakfast spreads (where else can you find ice cream and fried noodles side by side)? 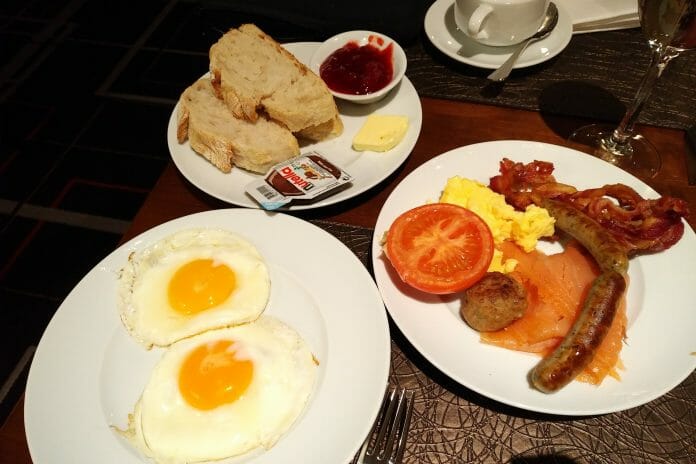 There wasn’t much separating the Westin and Cosmo for me. Neither one really stood out- the Westin probably won for location and breakfast spread, the Cosmo for style (even if it was a bit underwhelming for a Design Hotel). If you’re visiting Berlin you can’t really go wrong with either, and I’d probably let price dictate where I stay.

Aaron Wong
Aaron founded The Milelion to help people travel better for less and impress chiobu. He was 50% successful.
Previous articleTapping my way round the world: Titanium Rewards, mobile payments and 4 mpd
Next articleThe Krisflyer online partner award space situation, one month on

you should see me lift waits.