There are no fewer than 8 SPG options within San Francisco, and you can probably find one that’s around an area you’re interested in. You’ll also note the price tags differ significantly- on the lower end there’s the Sheraton Fisherman’s Wharf, which is the ghettoest of all Sheratons (albeit in a fairly decent location if you want to explore the Palace of Fine Arts, Pier 39 (don’t), Walt Disney Museum and Golden Gate visitor’s center), and on the upper end there’s the St Regis San Francisco, which will set you back a fair amount of change. 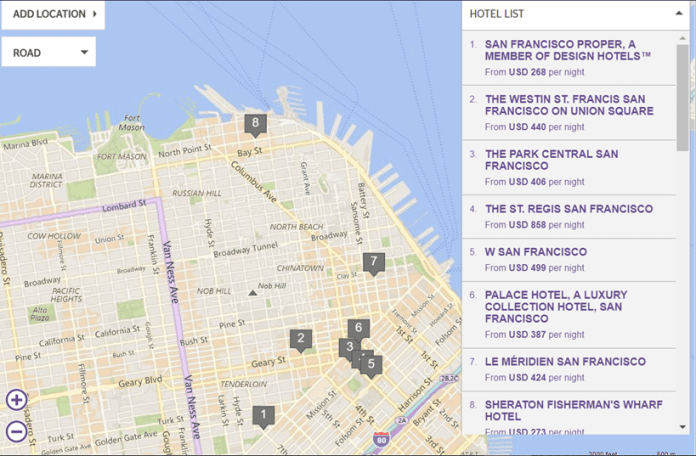 I manged to get a decent pre-paid rate at the W San Francisco and decided it resonated best with my identity as a young, hip and trendy individual who totally does not go to bed at 10pm and complain about his joints in the morning. Besides, I had fun at the W Boston, and part of me was hoping this would be equally epic.

That hope turned out to be misplaced, because the W San Francisco was as average as hotel stays come. It wasn’t that there was anything epically bad about the stay, just that it wasn’t anywhere near the regular prices they were demanding (sometimes upwards of US$500 a night. I know San Francisco is expensive but still…).

I got into the hotel at about 4.30pm after my flight from Boston. I was briefly considering driving to San Francisco but in retrospect am so glad I didn’t. San Francisco has gotten way more congested since I last visited, and crime has become an even bigger problem too especially car break-ins. Besides, parking rates are just obscene, with the W wanting US$56 plus tax per night. Uber, on the other hand, is relatively affordable in San Francisco plus they’ve got even cheaper options like Express Pool, which is like Uber Pool only you save money by being picked up and dropped a little distance from where you’d like to be.

There was surprisingly no one at the entrance to greet and help guests with luggage (although as I mentioned in my W Boston review I sometimes prefer this in the States to avoid that awkward situation of “am I supposed to tip for this?”), which isn’t something you’d expect at a premium hotel like this.

The lobby was bathed in bright California springtime sunlight (my Uber driver remarked it seemed like they’d skipped Spring and gone directly to Summer- and indeed it was close to 30C in the day) which wreaked havoc with my camera. Suffice to say the lobby is usual W chic, open bars, mood lighting, and a Pac-man machine because.

I know that suite upgrades are relatively rare at US Starwood properties but I didn’t want to burn more SNAs on a work trip. I ended up getting exactly the room that I booked (the nerve!). The rooms were decidedly disappointing and in urgent need of light- no amount of blind drawing (the room looked out into an alley) or switch flipping managed to raise the ambient light beyond a moody gloom. The most disturbing thing was that a small fly had found its way into my room and was making loud conversation with the window.

The room layout was really like your average hotel room, the only difference being the decorations and fixtures.

They had, for whatever reason, given me a room with two beds and hence I immediately designated one bed as the daytime nap without bathing bed and the other as nighttime sterile bed. I like to compartmentalize my life that way.

By the window was a sitting area with a few cushions. Unfortunately the room looked out into an alley, the kind where Bruce Wayne’s parents probably died.

The one thing this room did have going for it was an abundance of desk space. The long desk spanned the width of two beds plus the nightstand, and had ports for computer charging and wired internet access.

I thought the inclusion of the bookshelf was neat, but really who ever reads hotel books? I’m curious to know.

I’m ashamed to say I found the contents of the minibar more fascinating than the bookshelf. “Facial in a box”? The inquiring mind wants to know.

This being a W, there was the usual in-room mix your own cocktail set. If you chose to partake I believe it would cost close to US$50.

And there was a capsule coffee machine- the first few hits were free but a refill would cost you.

W bathrooms are supposed to be wow worthy, but this one was rather meh. You had the usual bliss amenities (albeit the small bottles- only suites get the full sized ones), but take those away and this bathroom would be no different from one at, say, a Sheraton (ouch).

Elsewhere, the hotel had a pretty impressive gym with a skylight. There was no one there when I visited, but the place looked like it could easily take 20, 25 people at one time. Bottled water and prepackaged cold towels were available.

The W San Francisco makes you choose between points and breakfast (as do most properties in the US). I opted for points, but still had my daily breakfast at Trace restaurant in the lobby.

There’s a slightly different menu on the weekends versus the weekdays. I believe SPG Platinum members get the “W continental” breakfast.

I had the chance to try two different things on two different days. The first day, I had avocado toast. It’s the reason I can’t afford a house, apparently. It wasn’t the best rendition of the dish, but was still a pretty good effort. Those things on top are sunflower sprouts, in case you were wondering.

And the second day I had a good old fashioned bagel with lox and avocado. Do note that orange juice costs an eye watering $9 here.

I don’t think the W San Francisco was worth anywhere near the asking price on regular days. The rooms were basically standard hotel rooms with slightly nicer decor, and for the money you pay you’d think they could get more light into a room.

Oh, and by the way this property charges a package handling fee if you want to send Amazon packages to yourself ahead of time (why do that when San Francisco is full of Amazon lockers, you may ask? Well, only items fulfilled by Amazon can be shipped to lockers and the lockers do have size restrictions)

I find package handling fees to be needless moneygrabs- does it really cost $10 to sign for a package? Does the effort needed to sign for a heavier package necessitate an increase in the handling fee? I made known my displeasure about the fee to the concierge before I arrived, and they agreed to waive the fee. So remember, these things aren’t set in stone- if a hotel wants to charge you a handling fee, always see if you can try and get it waived.

I’d be much more keen to explore other SPG hotels in SF in the future.

i’ve stayed at a few SPG and marriott hotels in SF and find the marriott ones much better apart from the st. regis and palace: marriott union square, JW, and even downtown courtyard isn’t bad (although marriott marquis is ghastly).

The interior decor is quite understated for a W. I quite like the desk, it feels homely.

jeez two beds milelion, how many ladies did you take home?!

Your review matches my experience. Very meh.
Location is good for Union Square and MOMA I suppose.