It was now time to head onwards to Dar Es Salaam. The Ethiopian Airlines lounge was nothing to get excited about, but at least they had a slightly unique boarding procedure for business class and Star Gold passengers.

At one end of the ADD terminal is a (poorly marked out) waiting area for priority passengers. This is a special waiting area for VIP passengers before they board.The execution is pretty poor though, as I was never told about this special area and only knew about it through my colleague who had used it previously. 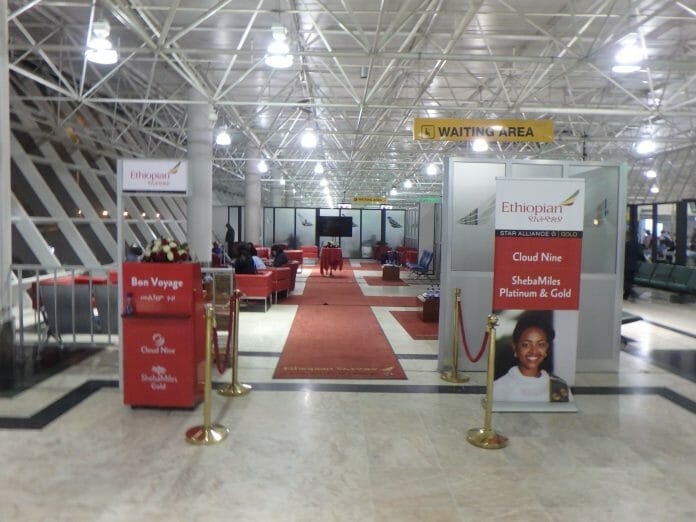 As it turns out, the majority of flights from ADD board through remote gates, so ET arranges special transport for preferred passengers so there’s no need to share with the hoi polloi. Instead, when your flight is ready for boarding you’ll be ushered onto a private bus and driven to the plane. 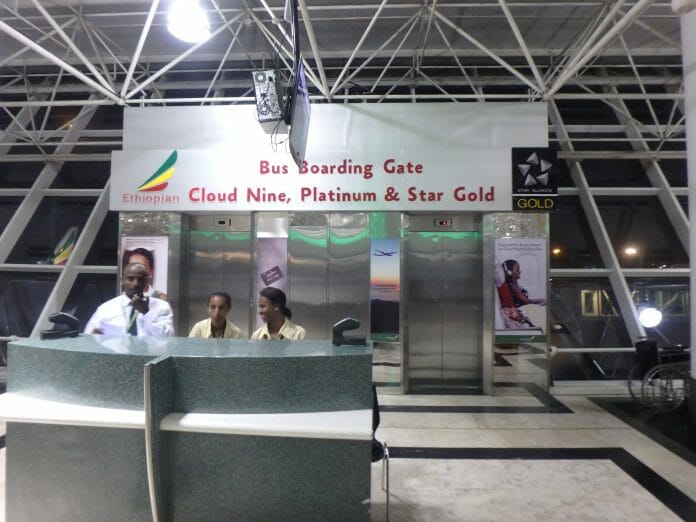 This was the first surprise of the evening. After the claustrophobia that was the Cloud 9 lounge, it was refreshing to have some personal space as we drove to our 737. 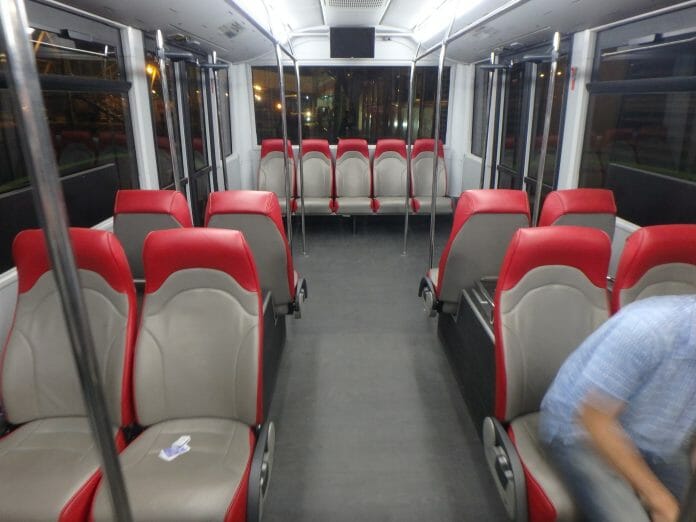 And that’s the second surprise of the evening. Instead of pulling up to a 737, we stopped at a turboprop Bombardier Dash 8 Q400.

I didn’t quite know how to feel about this. On the one hand, as an aspiring aviation geek I should embrace every opportunity to fly a new aircraft. On the other, downgauging from a 737 to a Q400 meant a much cozier cabin with fewer creature comforts like a simpler meal service, and I was pretty hungry after the less than robust food selection in the lounge. On the other other, the Q400s were fairly new additions to the ET fleet.  On the other other other, it didn’t mean the cabin products were new, as you’ll see below 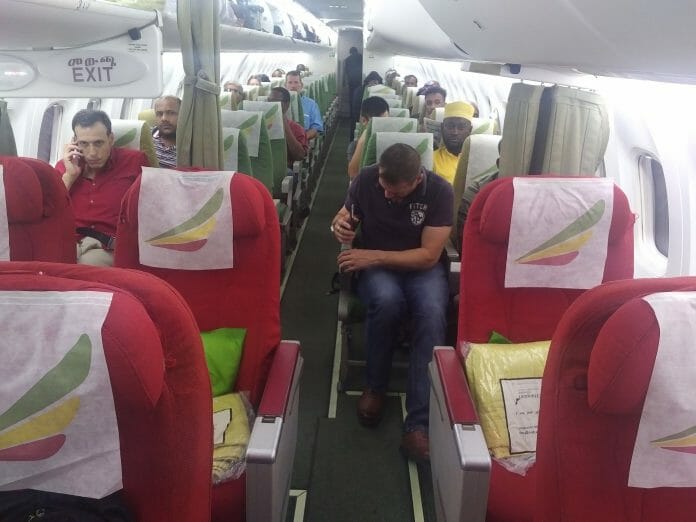 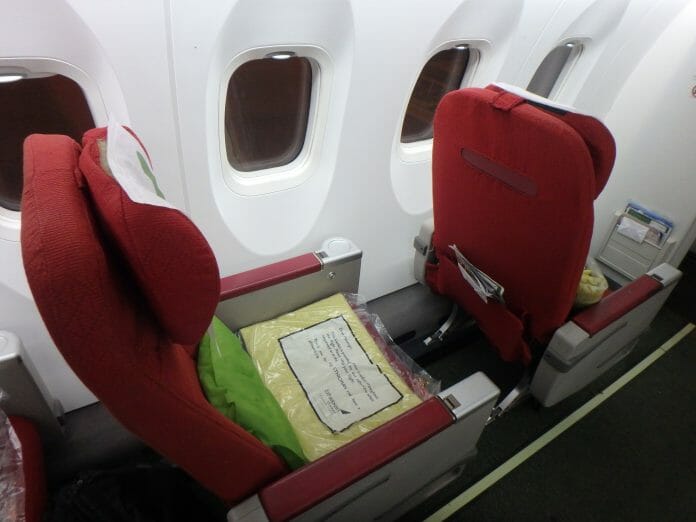 We could pick any seat in the cabin, but the seats were exceedingly old. The fabric was loose and saggy in some places, and fit awkwardly in others. The reclining mechanisms were entirely manual and there was no footrest. 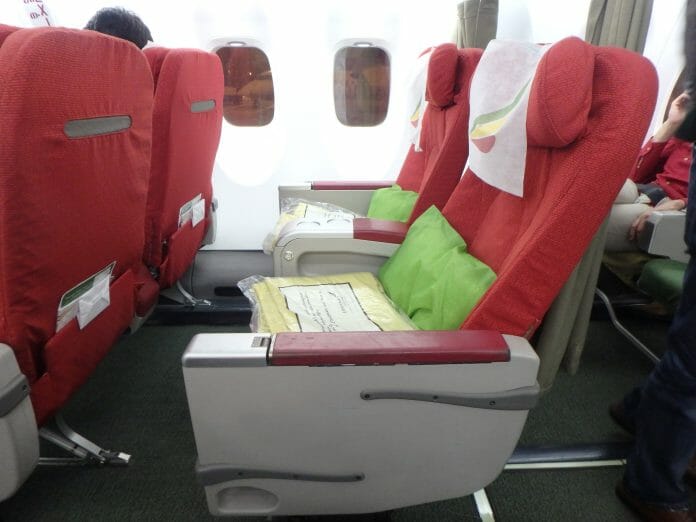 It definitely wasn’t the most comfortable seat for a 3 hour flight, although I’m going to apply my usual “think of the poor souls in economy rule” and shut up.

There were two crew to serve the business class cabin so there was no lack of personalized attention. One of them came around with champagne before takeoff. It’s the same stuff as on the long haul routes, Canard-Duchene. 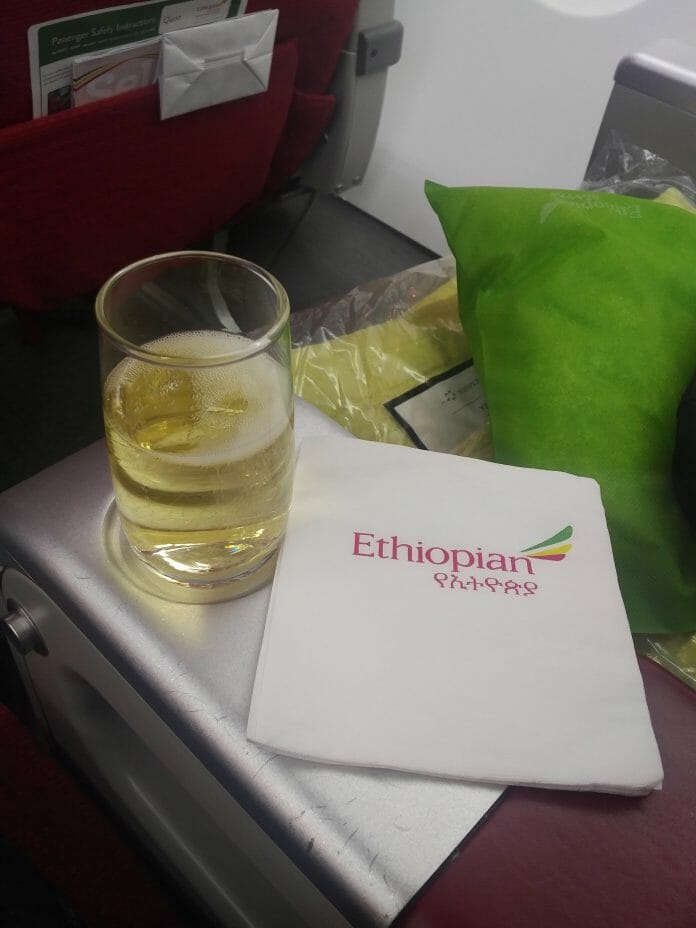 They also distributed bottles of water. I asked them about the equipment swap and they said the 737 we were scheduled to be on had some mechanical trouble. Most of the short haul air crew were cross trained on a mixture of 737s and Q400s though, and swaps like this were not unheard of. 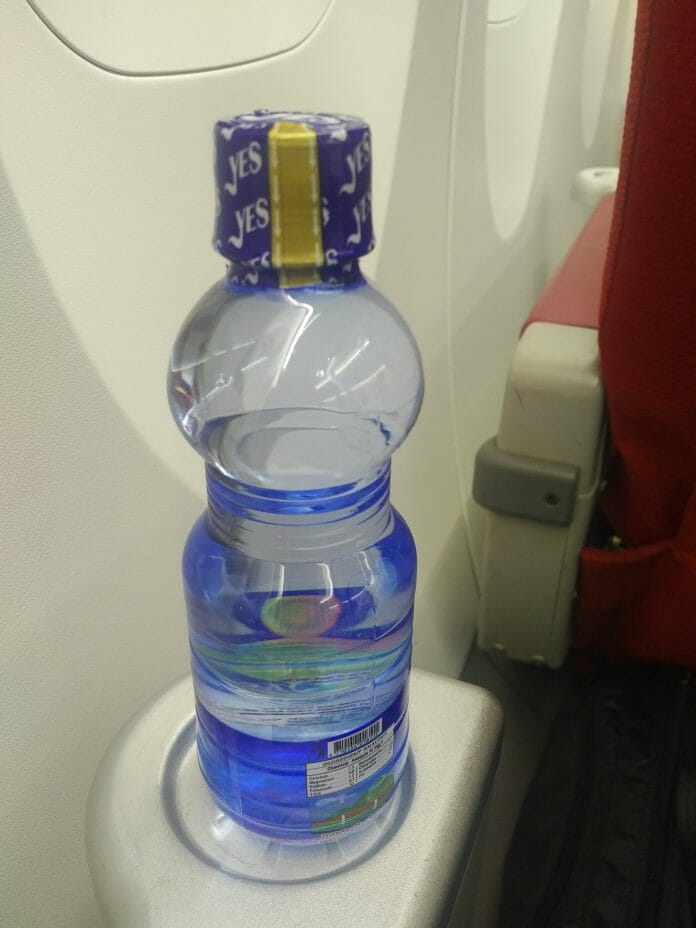 If it’s any small comfort, I don’t think the 737 experience would have been much better, but at least the seats looked a bit more comfortable what with the footrest and wider dimensions.

We took off and climbed to our cruising altitude after which the crew got dinner ready.

I mentioned that the catering and all would have to be downgraded on account of the aircraft swap. I don’t have the full details about the galley situation on a Q400 but I imagine it’s somewhat less robust than that on a 737. Meal service reflected the limited reosurces as well, with a single tray featuring a cold wrap, cheese, some fruits and crackers. Putting two grapes with the cold wrap was an odd choice of plating, but the meal was borderline inedible anyway. 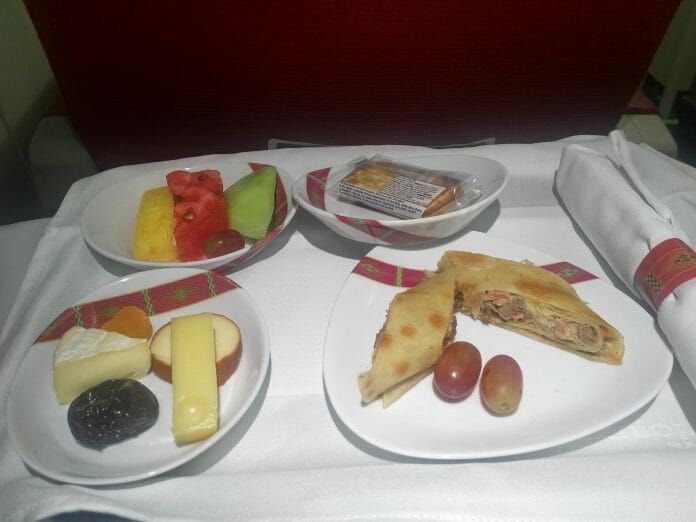 After the meal it was lights off. Nothing but the drone of the dual turboprop engines as we flew Southwards to Dar Es Salaam.

The problem I have with aircraft like this is the sheer lack of information. Because there are no overhead screens to speak of, you really have no idea how far more you have to go. You could always track via the time that’s elapsed, I suppose, but I think I’m the sort who needs the soft glow of at least a bulkhead monitor to answer the “are we there yet” question. I turned on the GPS on my phone and was able to track the movement of the plane, however.

The uncomfortable seat meant that sleep was in short supply, so the flight seemed to go by in slow motion. Thankfully, the pilot eventually came on the PA to announce we were on final descent to Julius Nyerere International Airport.

It was pitch black when we landed. We were bused to the terminal where a whole new adventure in African bureaucracy began. The arrivals area was mobbed with Westerners trying to get visas on arrival. Fortunately, Singaporeans don’t need a visa for Tanzania (I know, right?) and I managed to get through the crowd rather quickly. Not so much luck for my American colleague, who ended up having to go for his Yellow Fever jab and wait an hour for his visa on arrival. I at first felt bad about leaving him behind at the airport and going to the hotel first, but felt less bad after a hot shower and nice bed.

It’s not every day you’ll fly on a turboprop plane, especially if you’re Singapore based. So definitely a nice experience but not one I’m aching for again.

Man, I can’t wait to get to the Qatar Air trip reports…

you ‘could’ issue a teaser report for your Qatar trip……………… or maybe on second thought….’must’