A review of Turkish Airlines' recliner configured business class on their A333s.

After getting into IST after an above-par intra Europe business class flight from BCN, I had just under an hour to connect to my next flight onwards to AMM. Even though I’d already reviewed Turkish Airlines’ A333 business class product two years before, I was looking forward to trying it again even on a short 2 hour hop from IST to AMM. 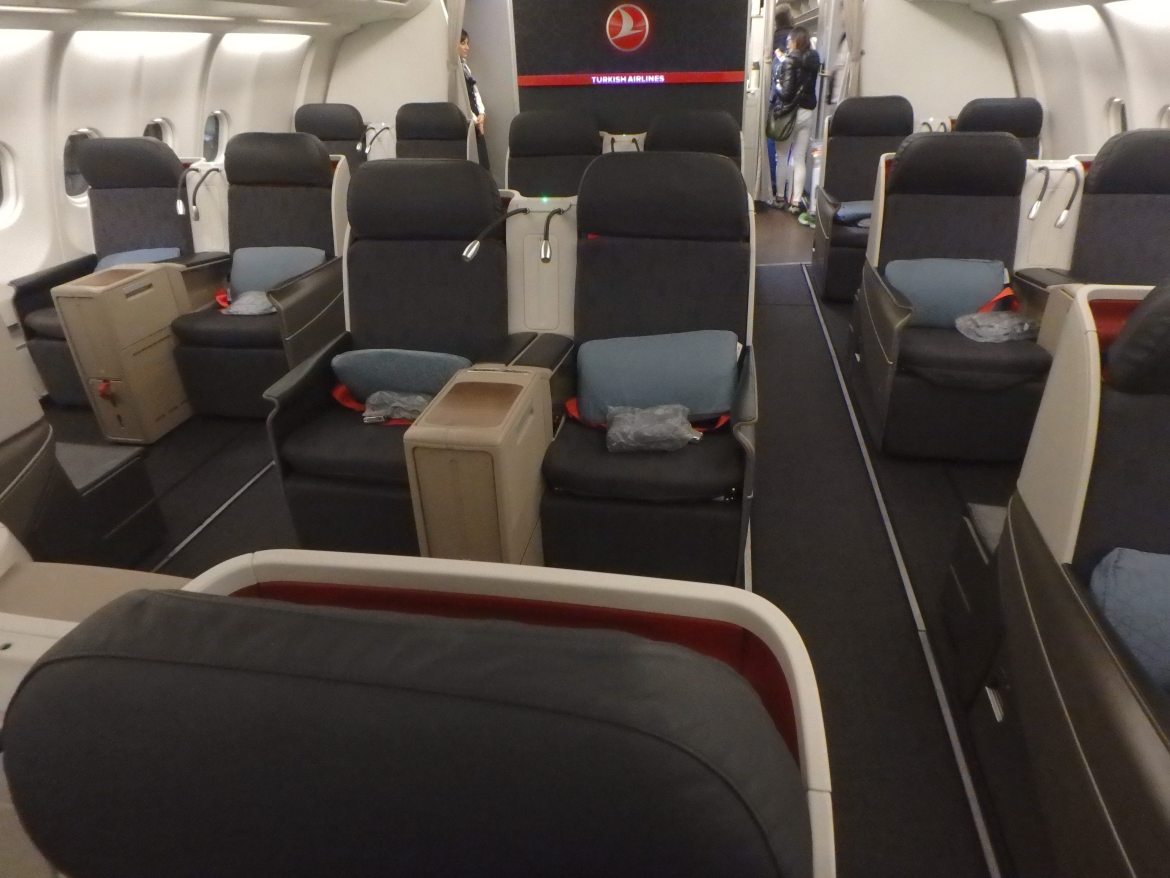 I checked the aircraft type on Seatguru when I was booking my trip and confirmed that indeed the A333s had flat bed seats in a 2-2-2 configuration. 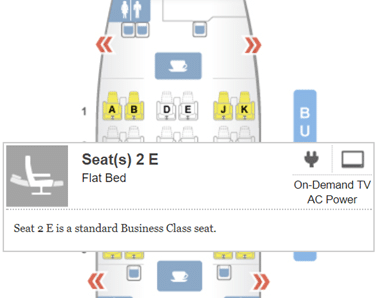 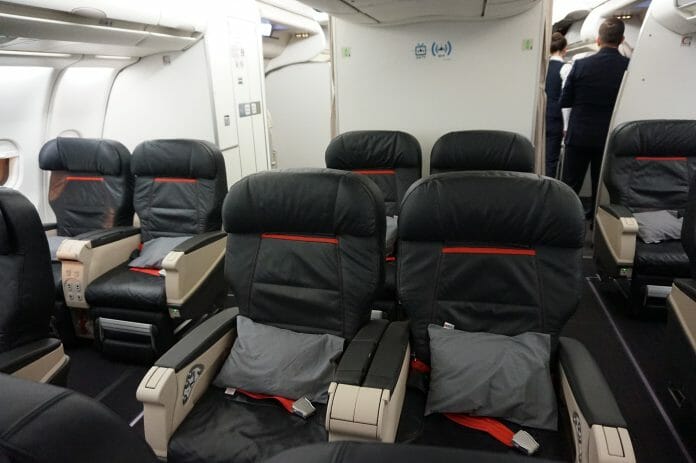 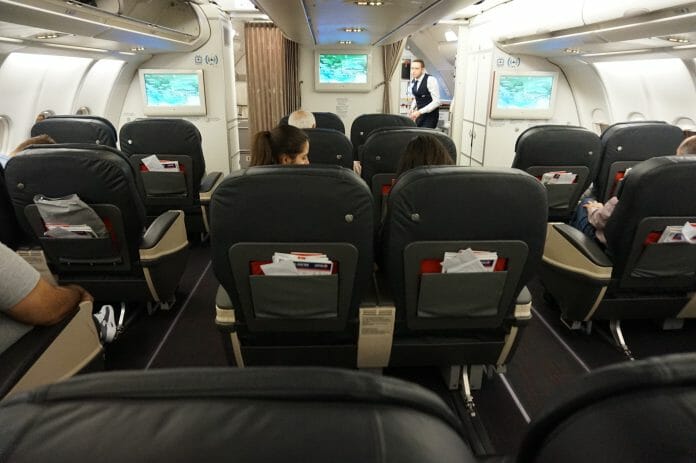 At first I thought we had an aircraft swap, but Flightradar24 shows the route was indeed operated by an A330-300 that day.

So I conclude that Seatguru does not have a comprehensive listing of TK’s seatmaps. Have a read of this FT thread where some people complain about TK deploying this recliner seat configured A333 on medium haul routes. 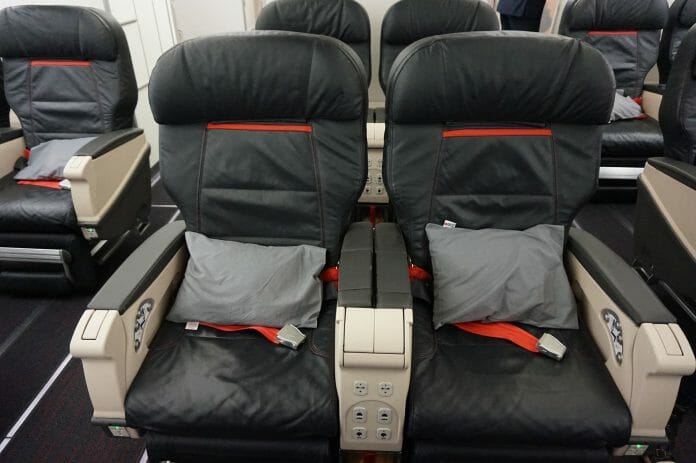 It was a short flight so in the grand scheme of things it didn’t really matter, although you might want to be aware that if you book a Turkish Airlines award redemption and it’s on an A333, you should check the seatmap to see if you have the recliner seat configured plane or the full flat configured one.

If your seatmap shows 7 rows of business class seats, you have the recliner version (I’ve used the KVS Tool to generate this seatmap below. I should really get around to writing an explainer post about this…) 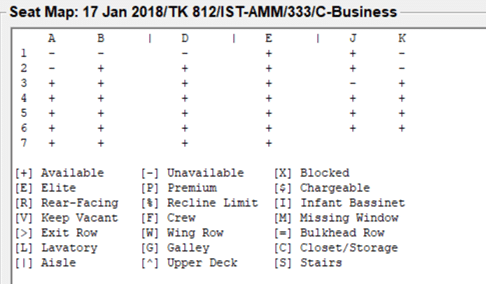 If it shows 5 rows of business class seats, you have the full flat version 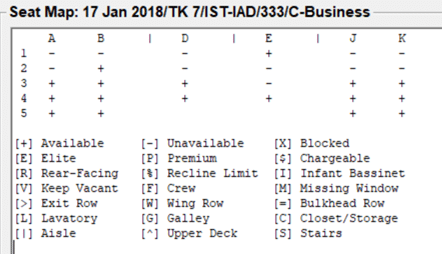 The seats have a large amount of legroom and it’s not that difficult to step over your seatmate to access the aisle if you’re in the window seat. 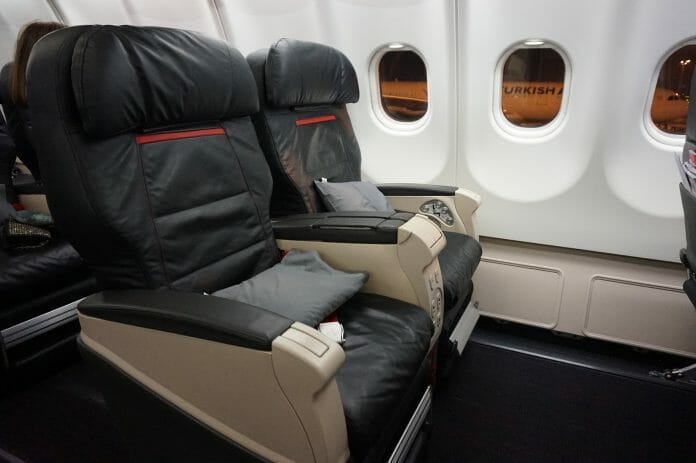 And there’s quite decent recline, much more so than the recliner seat on the previous intra-Europe leg. For a two hour flight, this was more than adequate. 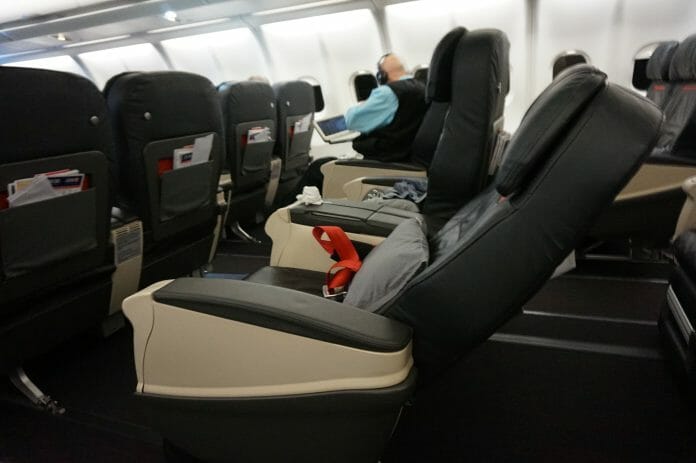 The crew came around with welcome drinks. I’ve realised Turkish Airlines doesn’t serve alcohol on the ground, not even in IST. That strikes me as a bit strange, given it’s their home base. 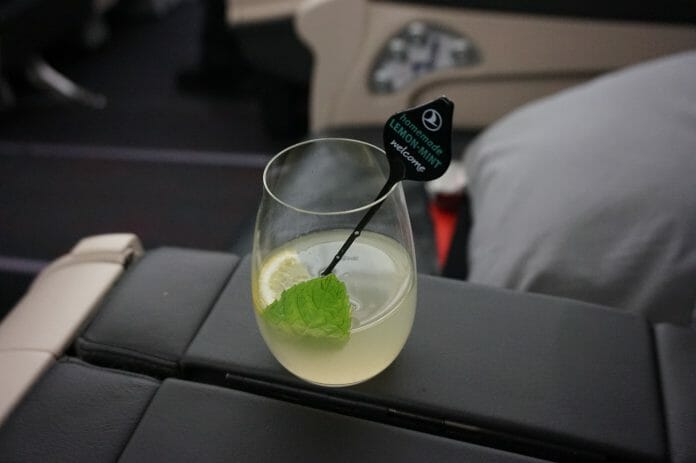 I tend to find tray tables from recliner seats to be really unstable, but fortunately the tray table was large and stable. 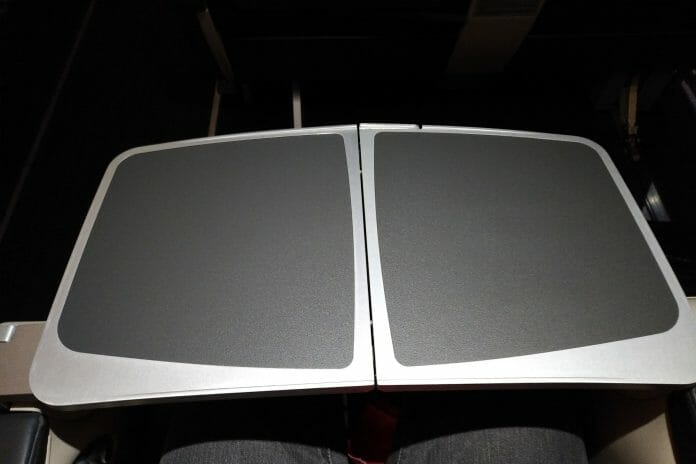 I don’t think I’ve ever been on an airline that invests so heavily in marketing as TK. Before takeoff, you sit through a series of videos by various celebrities. Pffft. As if Morgan Freeman would fly business class.

They also have Dr Oz doing a series of inflight health tips. I didn’t get a copy of that video exactly, but here’s a clip of the collaboration.

The flight took off smoothly and after the seat belt sign went off I checked out the IFE. This wide body A333 has an older IFE system than the B737 I flew from IST, although the screen is still touch sensitive. 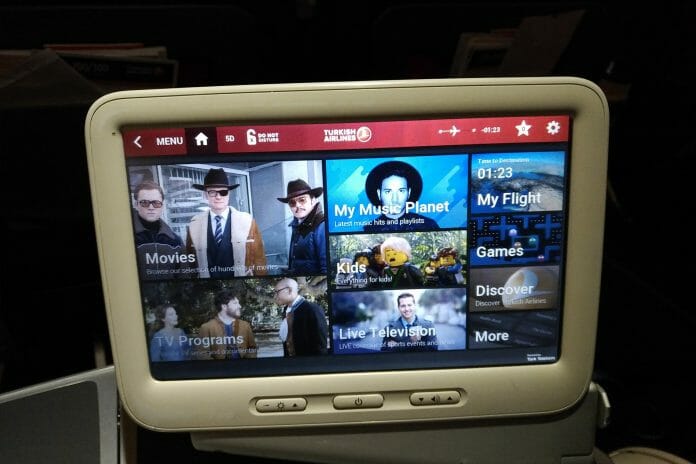 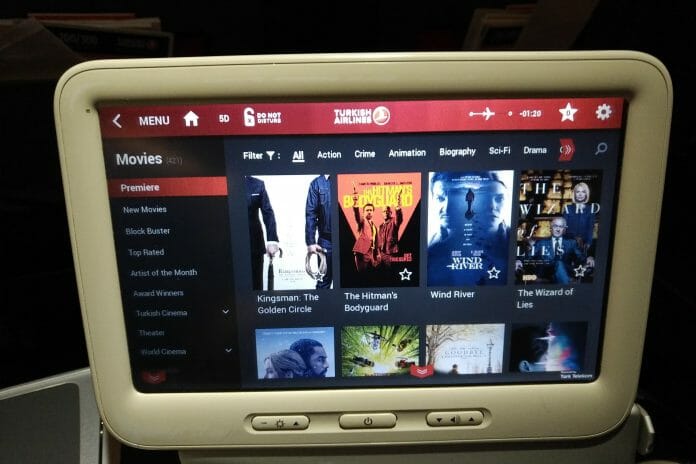 I love that TK has live TV available, something I really wish SQ would implement too. Unfortunately they weren’t showing the Arsenal Chelsea league cup match, so I didn’t have a chance to shout #wengerout at 30,000 feet. 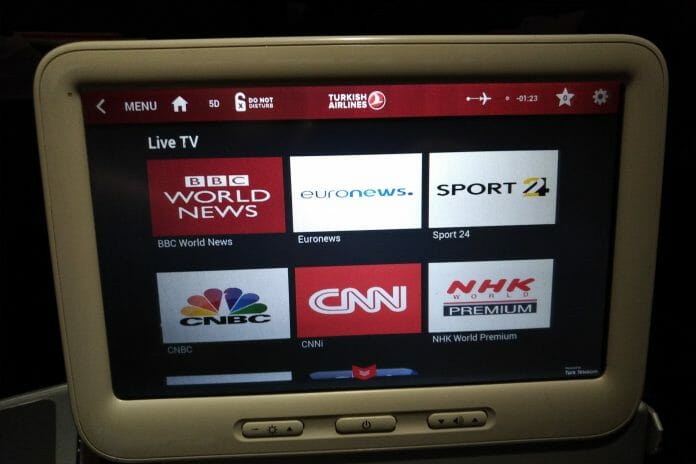 Instead I watched the BBC where Trump was shouting #immigrantsout. Not quite the same. 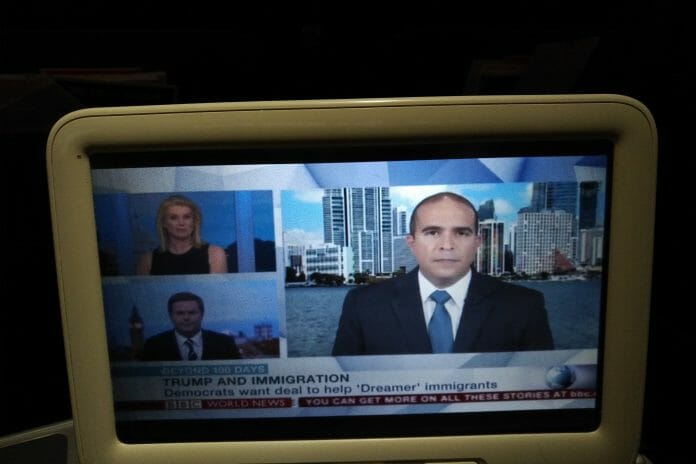 I’m ashamed to say I didn’t take a photo of the menu, but I think the meal is pretty self-explanatory. The starter was really salty smoked salmon with cream cheese. Turkish serves its meals on trays, which means you get the salad, the cheese and the dessert along with the starter. 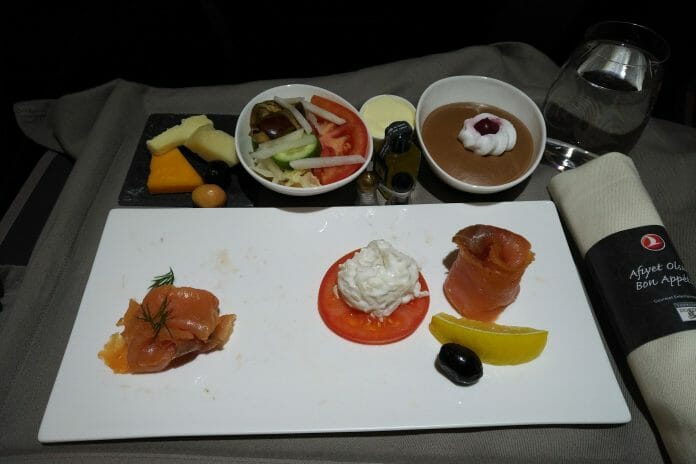 For the main I went with chicken and roast vegetables. The chicken was really dry. 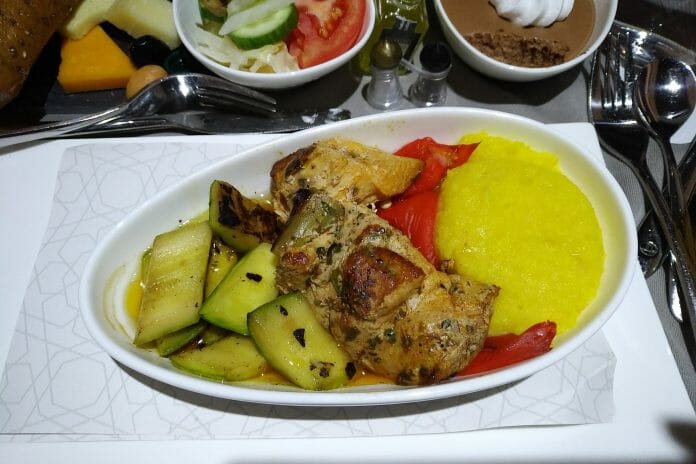 The bathroom stocked similar Molton Brown amenities as the intra Europe flight. There were also a couple of incense sticks 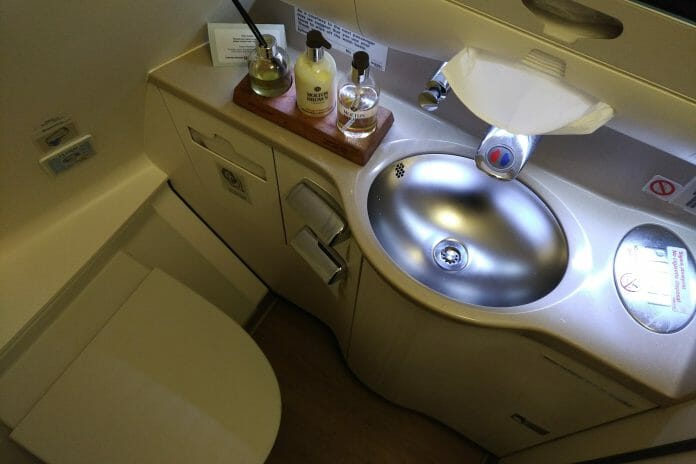 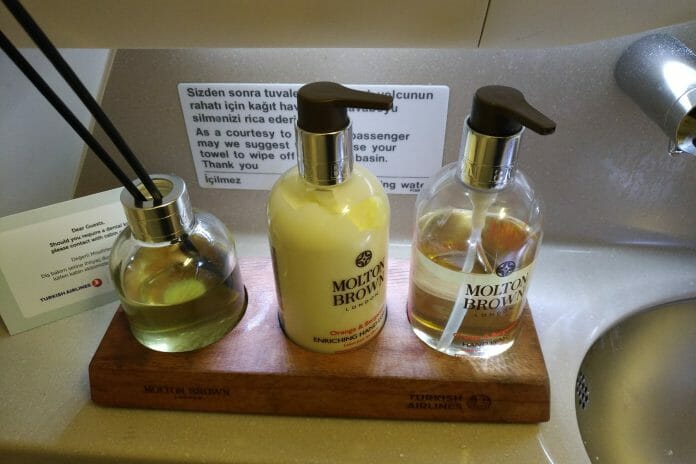 The best part about the flight was that there was free Wi-Fi for business class passengers. All you had to do was enter your seat number and last name and that’s it. If you fly in economy, it costs US$9.99 for 1 hour and US$14.99 for 24 hours. 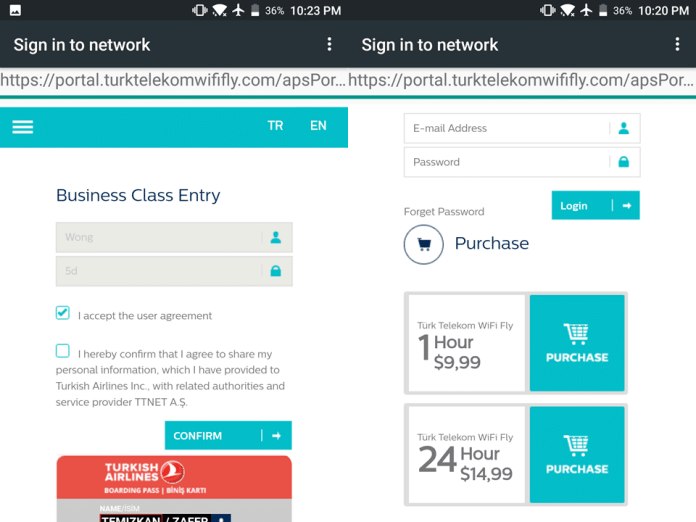 Although I was disappointed to get a recliner seat, it really didn’t matter that much on a short fight like this. I certainly wouldn’t consider Turkish Airlines to be one of Star Alliance’s top carriers, but they’re a solid tier 2 option. I’d gladly take their seats over the current Lufthansa business class, for example.

An important lesson here is that you should be certain about the type of aircraft (and seat configuration) operating your route before you book a ticket, if you’re hoping for a particular type of cabin product. This can be done fairly easily for some airlines which let you see the seatmap before you pay, but if not then you might want to consider KVS or ExpertFlyer. In this case it didn’t matter, but I’d have been considerably more annoyed if this were a medium haul flight like IST-DUB, which I understand the recliner A333s sometimes operate.

Aaron Wong
Aaron founded The Milelion to help people travel better for less and impress chiobu. He was 50% successful.
Previous article
Singapore Airlines announces London and Hong Kong as next two routes for new A380 cabin products
Next article
What happens when you actually try to fight a DCC credit card charge?

Aaron, do you think you could write a post on KVS Tool, expertflyer and describe the value that you (or we) could obtain through a paid membership? I’ve debated trying it out but could never convince myself that it would be worth it

haha would love to. it’s a question of time…

I have incoming flight from SIN to ATH and transit at IST.

I heard a lot of negative review of the IST airport in terms of the immigration queue and security clearance as well as the unhelpfulness of the airport staff.