The Milelion’s 8 wishes for Christmas 2018

All I want for Christmas is...

Every Christmas I make a wishlist of things I’d like to see happen in the world of miles and points. The funny thing is that when I look back, quite a few of them came true!

I didn’t publish a list in 2017, but given my track record I’m sure at least some of them would have come true 😉

It’s tough to earn hotel points in Singapore, no two ways about it. That’s why the recent AMEX Membership Rewards x Hilton transfer promo was such monumental news to me. 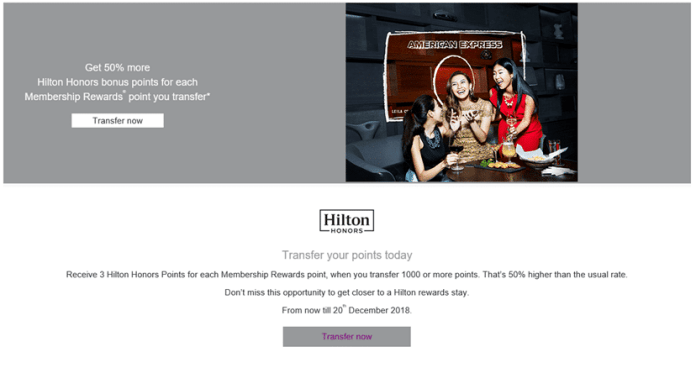 Under the promotion, 1 MR point could be converted to 3 Hilton points instead of the usual 1.25. By taking advantage of the sign up bonuses on the AMEX Rewards (spend $5K get 24K MR), AMEX Platinum Reserve (spend $5K get 56.25K MR) or AMEX Platinum Charge cards (spend $20K get 100K MR), one could generate a hefty load of Hilton points in no time flat.

There was some concern because the MR points transfer portal was never actually updated to reflect the upsized bonus, but I can confirm the first batch of my bonus points has successfully posted. 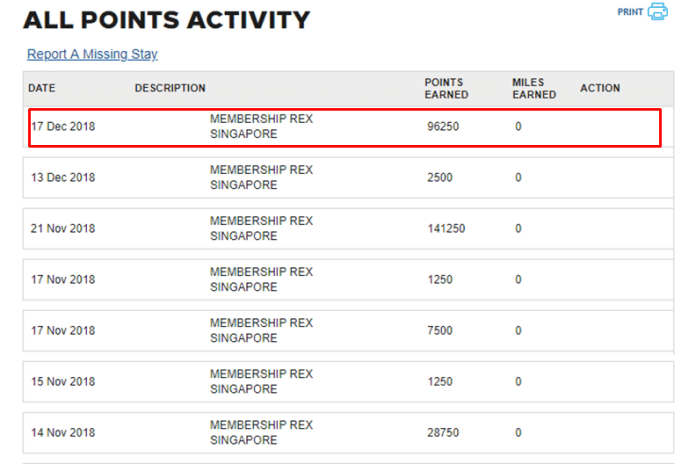 I’m eagerly awaiting the rest, because by my calculations I should have spent enough to get a 5 night free stay at the droolworthy Waldof Astoria Maldives…as soon as redemption rooms come online. 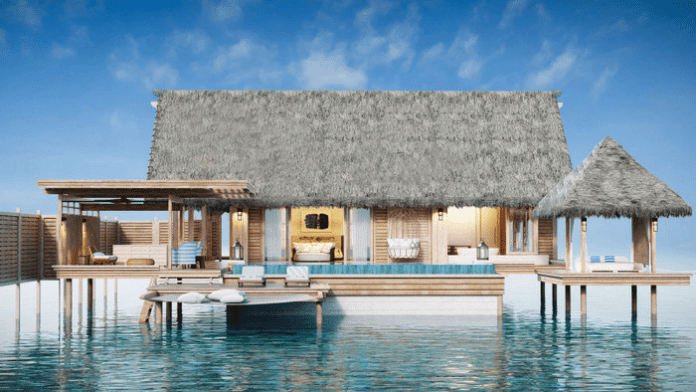 This was a fantastic promotion, and I hope we see more next year.

(2) Marriott points to go back on sale…at reasonable rates

While we’re on the topic of hotels, can I just say once again that the Starwood Marriott merger has created one of the most amazing hotel points redemption opportunities in recent memory? From now till March 2019, you’ll be able to redeem the highest tier properties in the combined portfolio for just 60,000 points, with the 5th night free.

The problem? Marriott points aren’t on sale. At least, not at affordable rates. You can currently buy 50,000 Marriott Points for US$625, which is 1.25 US cents per point. That’s not terrible, in the sense that you could redeem a room at the St Regis Maldives or any other Category 7/8 property for US$600 (48,000 points with 5th night free) a night, but it’s far from great.

Remember, SPG periodically sold its points at 2.275 US cents each, so that St Regis Maldives room could cost US$364 in a best-case scenario where you bought SPG points before the merger and had them converted into their Marriott equivalent.

I have no idea whether Marriott will see fit to resume points sales before March 2019, but few chains can resist the temptation to “print money” this way. It’s a little-known fact that hotel chains generally compensate properties for award stays at a highly discounted rate unless the property is at or near full occupancy, so it doesn’t actually cost Marriott a lot even if everyone uses their purchased points for high value redemptions.

(3) Another bank to enter the miles game with a bang 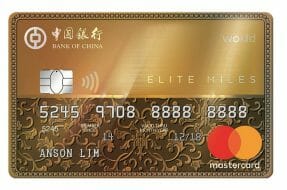 The BOC Elite Miles World Mastercard has been a revolution this year…assuming you could get your hands on one. Yes, the customer service leaves a lot to be desired, and yes, it’s quite likely that credit cards as a mode of payment will be obsolete by the time yours arrives, but an uncapped 2.0/5.0 mpd on local/overseas spending has a way of making people forgive many faults.

Sadly, the promotional 2.0/5.0 mpd rate will end on 31 December (although the regular 1.5/3.0 mpd rate will still be among the best in the market). This is unfortunate, but creates an opportunity for another hitherto unknown bank to step up and announce its entry into the miles game.

2018 was truly the year for big miles everywhere. We had the OCBC Titanium Rewards mobile payment promotion (which ended way too early), and we had the promo to end all promos…an uncapped 8 mpd when using Citibank cards with Apple Pay. It was unprecedented. It was titanic. It will probably never happen again. But hey, Christmas is about hope, right?

Is it too much to ask for a similar promotion in 2019? I’m struggling to think of any bank  capable of financing such a promotion, but 2018 has shown that they’re willing to roll out the big guns to stay relevant in the age of mobile payments. It’s worth noting that none of Maybank, Bank of China, CIMB or ICBC are currently on Apple Pay, although I just can’t see any of them doing something like this.

2018 saw the introduction of SQ’s new and improved regional business class seat. While some people aren’t fans of how narrow it is, the more svelte among us will appreciate the fact that it offers full flat sleeping, all aisle access on even short haul routes.

The A330s are scheduled to be returned to lessors through 2020, and it’s perhaps somewhat damning that Air Canada acquired some former SQ A330s and designated the Business Class cabin as Premium Economy. There’s no announced timeline for the 777-200/300 retirement, but hopefully the arrival of regionally-configured A350-900s will accelerate the process.

You can always keep up to date on the latest movements in the SQ fleet by referring to our fleet and seat guide.

In May this year came the not-so surprising news that SilkAir was going to be folded into Singapore Airlines. This meant we’ll soon see the Singapore Airlines livery on a narrowbody aircraft for the first time since the 1980s, when its B737-100 were retired.

The merger will take place only after SilkAir undergoes a S$100M “major cabin upgrade” that adds lie-flat seats in Business Class and seat-back IFE in all classes. This process is expected to start in 2020, which means we just might see a product unveil in late 2019.

Full flat seats on a narrowbody aircraft are not unheard of, and the “lazy” thing to do would be to go with something off-the-shelf, like the B/E Aerospace Diamond seat that Qatar and United have on their narrowbodies. But we know that SQ doesn’t do off-the-shelf, which is why I’m eager to see what the product team will dream up.

Will they go for fully enclosed suites, ala JetBlue Mint? Will we see the first instance of aisle access in a narrowbody? Will they introduce something that no one at all saw coming? Time will tell, and I’m excited.

In 2013, Singapore Airlines debuted its new “home” concept in the Sydney SilverKris lounge. At the time, the airline talked about rolling out the design concept to all 15 lounges in the next 5 years, with Changi T3 getting the upgrade in 2014.

It’s now 2018 and there’s been no progress in sight for Changi. Apart from an off-the-cuff comment that AusBT captured from the SQ CEO during the 787-10 delivery flight, it’s been radio silence from the airline about when we can expect to see new lounges appear in SQ’s home base.

SQ’s competitors have greatly improved their lounge offerings in recent years, with spa treatments, game rooms, hotel rooms, yoga studios, hair salons, whiskey rooms, bubble baths, chef-driven menus now the standard to beat. However, Singapore Airlines has historically erred on the side of conservatism when it comes to lounges, and I’d be surprised if we see anything too out of the ordinary.

Another interesting factor in the equation is Qantas’ announcement of a new First Class lounge in SIN by the end of 2019. This has thrown down the gauntlet to SQ- surely the airline can’t afford the humiliation of another carrier outshining it on its home turf?

Clearly, a major lounge revamp for Singapore Airlines in Changi Airport is well overdue. We’re unlike to see anything until 2020 at the earliest, but maybe we’ll get some leaks next year.

Your miles and points are as good as cash, but few travel insurance policies recognise this. In my latest assessment of policies, only Sompo, Aviva and Chubb provided any coverage for award tickets and hotel bookings in the event you can’t travel. It’s puzzling why more major providers haven’t added similar coverage, but it perhaps speaks to the preferences of a market where 80% of cardholders prefer cashback over miles and points.

For what it’s worth, I personally switched over from Direct Asia to Aviva this year because of the inclusion of miles and points coverage. My wish for 2018 is we see more plans add this feature, so miles collectors have more options for protection.

I’ve got many other wishes which I left off the list because, well, I’m a realist at heart.The end of DCC (and prosecution of all those responsible for its creation), no more unannounced devaluations, an end to revenue-based redemptions, and amenities kits on Singapore Airlines (wait…) are all at the back of my mind, but perhaps we should give thanks for what we have than dream of the utopia we don’t!

All in all, 2018 has been a pretty good year for miles chasers, with outstanding promotions and exciting new products (both on the ground and in the air). I can’t wait to see what 2019 brings.

Aaron Wong
Aaron founded The Milelion to help people travel better for less and impress chiobu. He was 50% successful.
Previous article
Get S$100 off your flight bookings when you fly with KLM
Next article
Redeeming a Star Alliance flight? Don’t forget to check out Turkish Airlines Miles&Smiles

My wish – Permanent amenity kits for business class. Doesn’t cost a lot but rounds off the experience.

Good suites award space for two to Europe and the US, six to ten months in advance.

What good are simple wishes?

@Aaron, not trying to deviate from the topic but you mentioned you are using Aviva for your travel insurance. Any reason why you chose them over Chubb especially in a previous article on travel insurance you gave quite a positive review for Chubb.

My wish – for Milelion to remain so awesomeeeeeeeee!

Depends if you’ve been naughty or nice