It was 10pm in Riyadh and the weather outside the terminal was approximately 39 degrees and stable. The plan was to be in Riyadh for only 2 days, fortunately, because I really wasn’t looking forward to walking around in the heat. 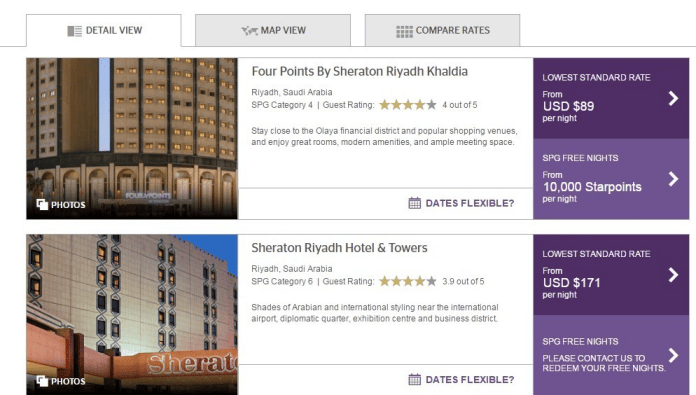 There are three Starwood options in Riyadh, the Sheraton, Aloft and the Four Points. The Aloft wasn’t open yet, so I chose the Four Points even though it’s decidedly more downmarket because it was participating in SPG’s Triple Up promotion. See what happens when you opt out of promotions, SPG properties?

I had read stories about how unmarried men and women weren’t allowed to travel in the same vehicle together. I emailed the hotel asking whether we’d need two cars. Their reply-

Please be informed you here is no problem with sharing car with the female, so it’s not required 02 cars.

My colleague informed me she can’t remember the last time she was referred to as “the female”, but she was flattered to be addressed in such endearing terms nonetheless.

It took slightly under an hour to get to the hotel from the airport. Saudi drivers sure love American made cars and chains. I counted dozens of Chevrolets, Buicks, Fords and several Applebees and TGIFs on the way in. 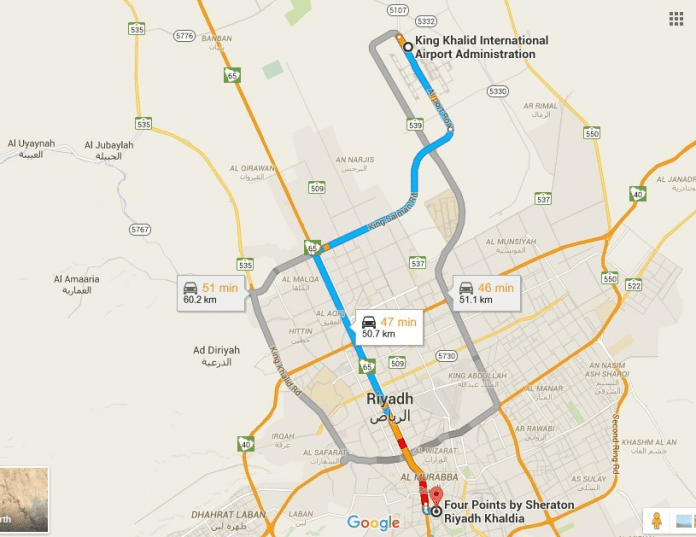 The Four Points Riyadh is one of the largest Four Points I’ve ever seen. Here it is photographed in daylight. There are 26 floors in total with 367 rooms and 85 suites. 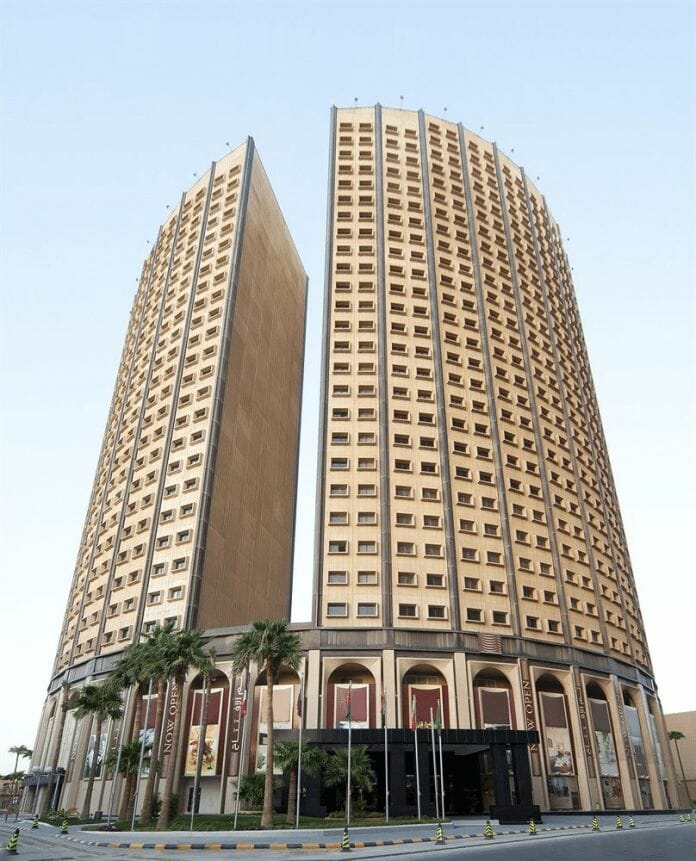 What you need to understand about Four Points by Sheraton is that it’s the select service brand of Sheraton (I love that term- select service. We’ll select what we want to serve to you and by golly you’re going to like it!). So don’t go in with high expectations and you won’t be disappointed. There’s a reason why Four Points dot airports, convention centers and highway rest areas worldwide. 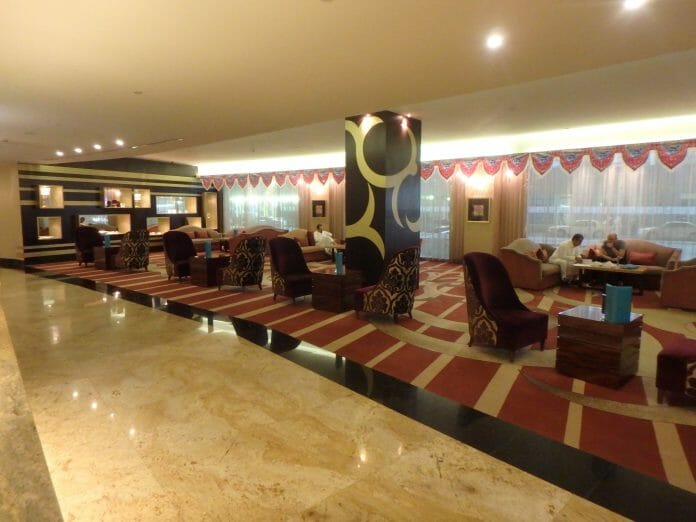 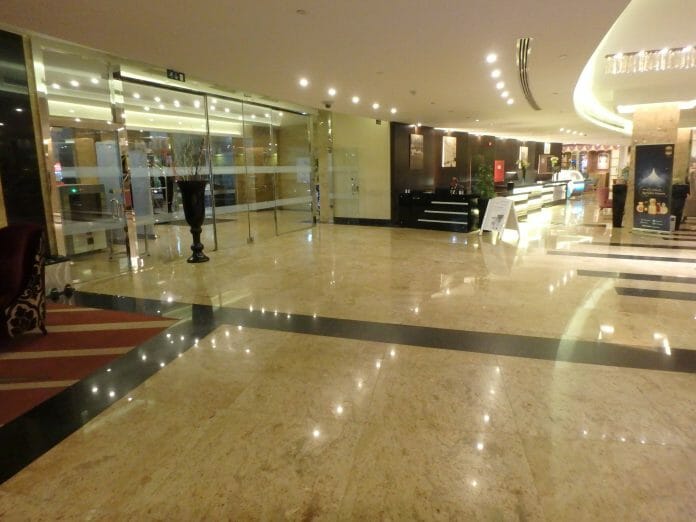 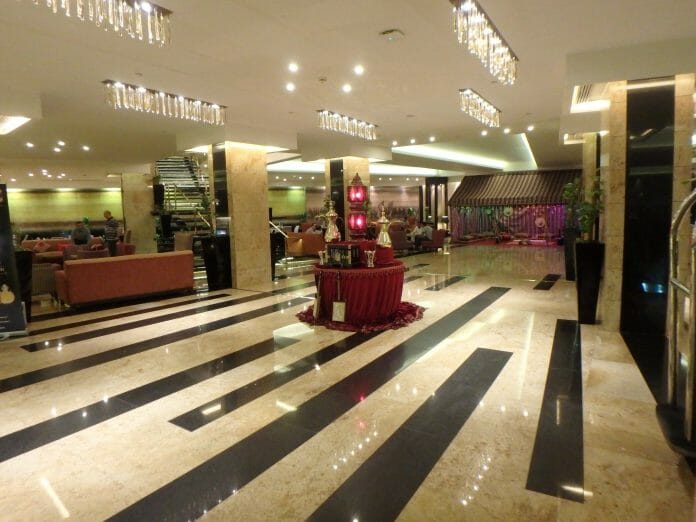 There was no line at check-in when we arrived shortly before midnight. I was upgraded to an executive suite and given both breakfast and 250 points as my amenity. My room was on the 19th floor. 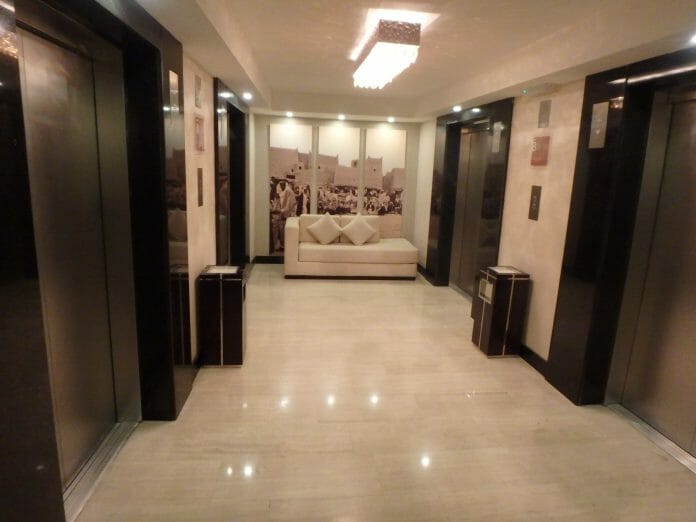 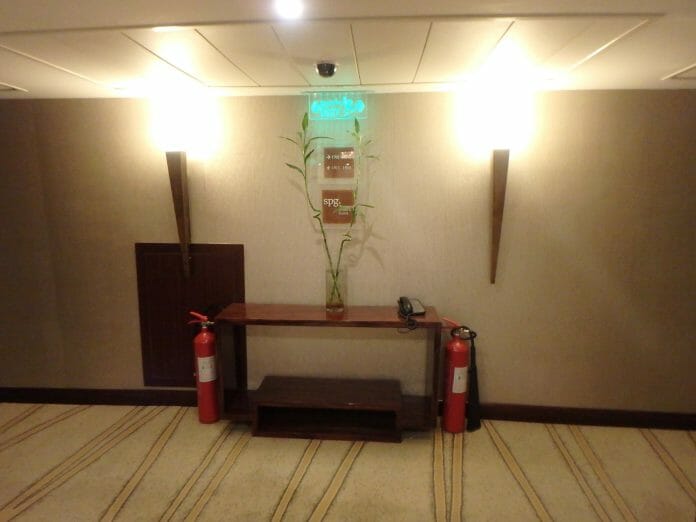 The suite was large with a separate kitchen area. There was a full sized fridge and an induction cooker. 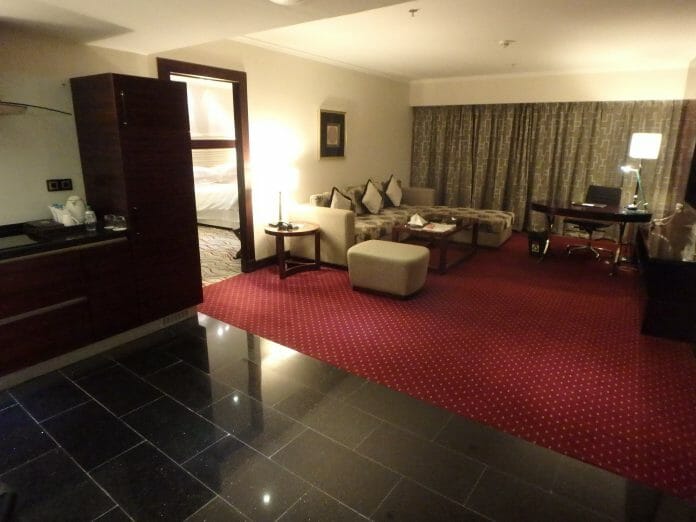 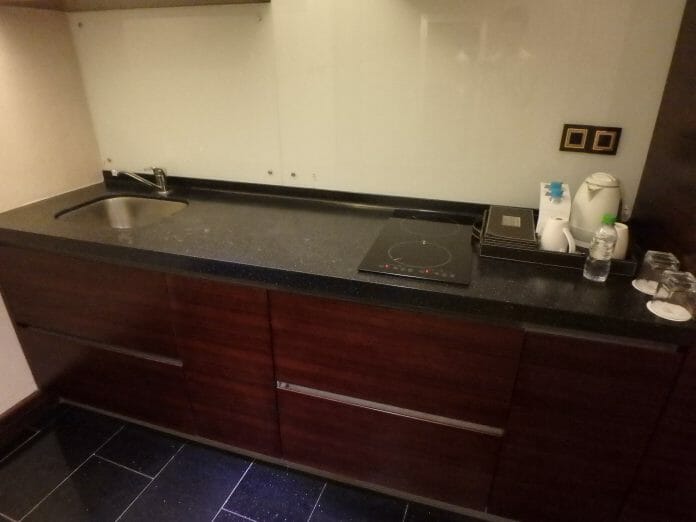 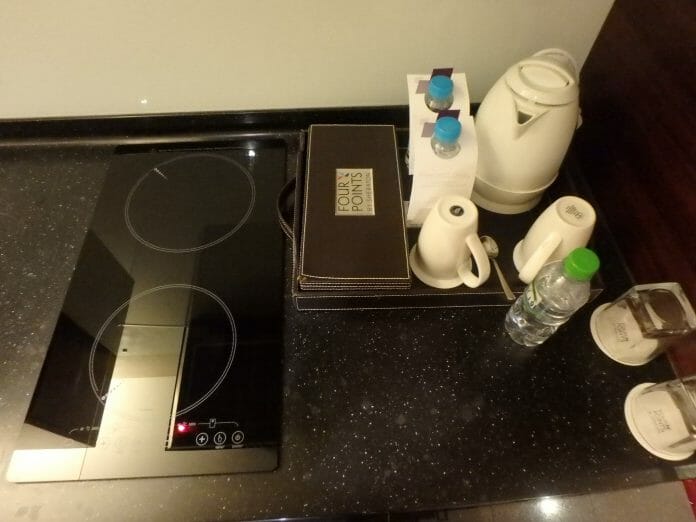 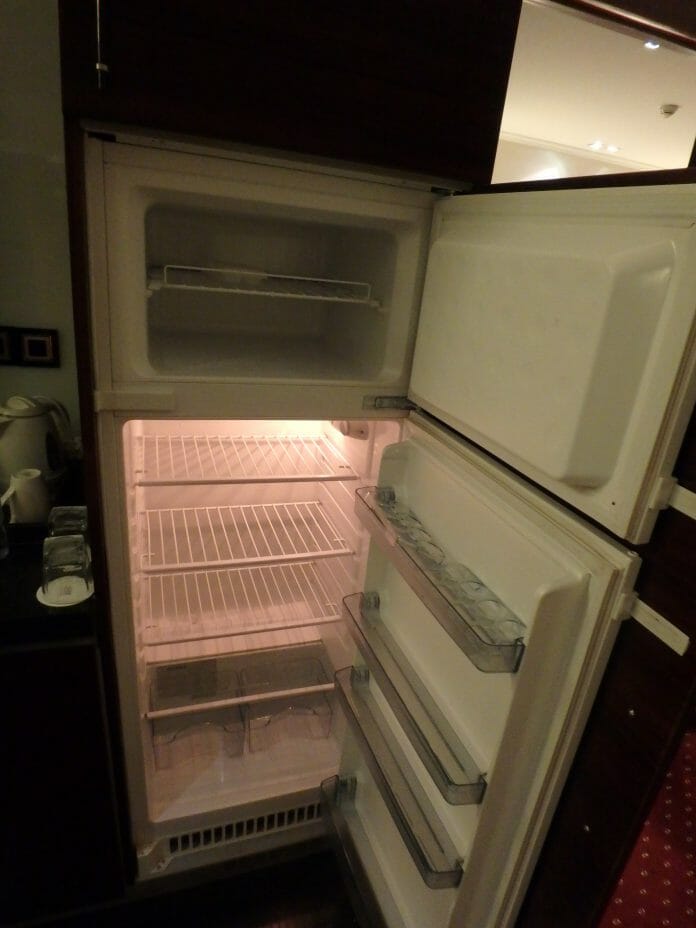 The bedroom was pretty standard stuff, though I did appreciate the blackout curtains. That Saudi sun’s not to be trifled with. A sufficiently large bathroom with push dispensers for soap and shampoo. 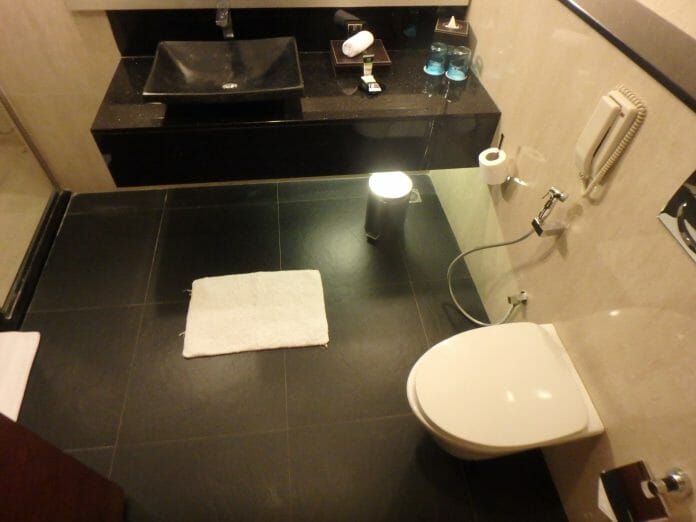 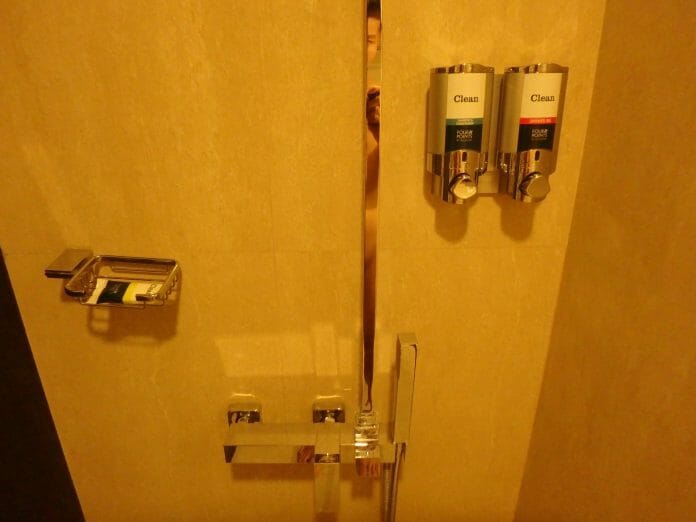 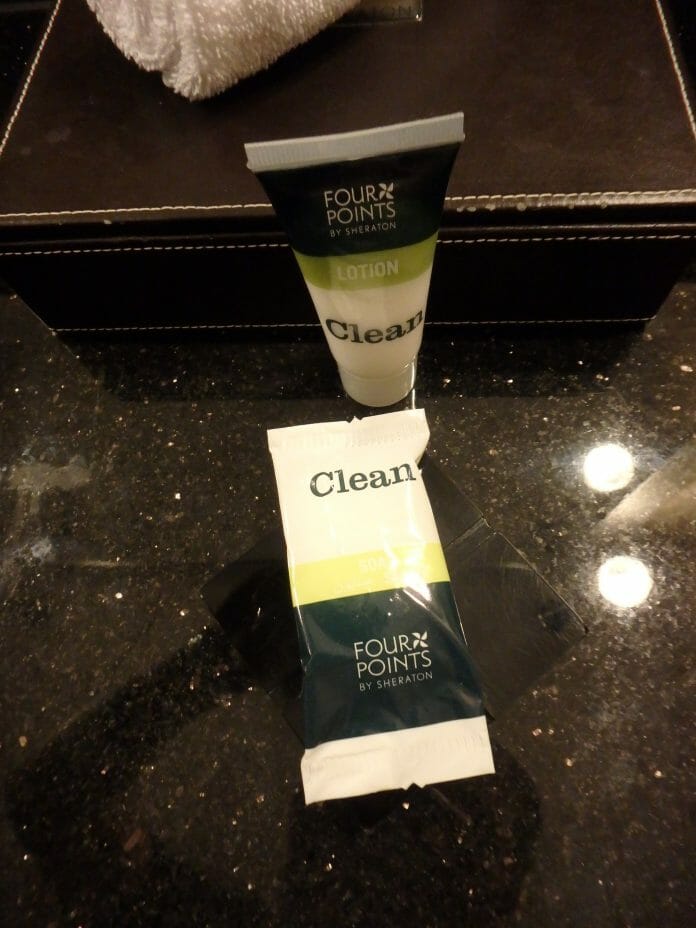 I was pleased to note that the property participated in MAGC, but since it’s a Four Points the reward is only 250 points a night. It was the Ramadan period when I was there. Ramadan in Saudi is very different from Ramadan in more moderate countries. No restaurants can be open during the fasting hours. Muslims and non-Muslims alike cannot eat or drink (even water) in public. Room service in the hotels is your only option if you want to dine. The room service food was awful, though that might simply be my poor choice of cuisine. It might not be realistic to expect good tempura prawns in Riyadh. 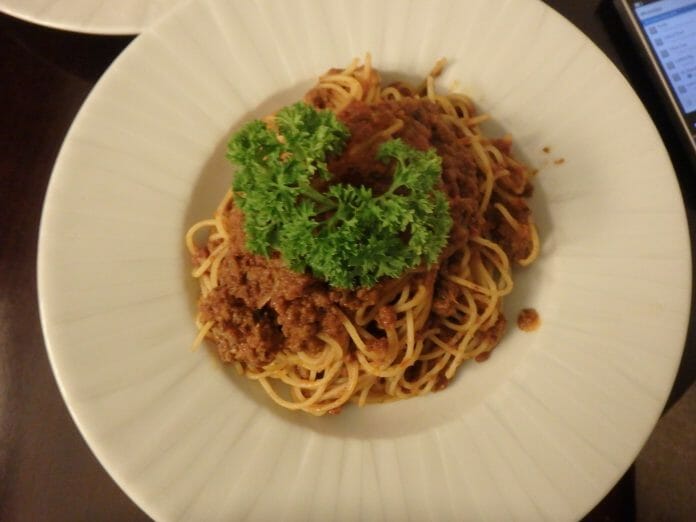 The rest of the stay was largely unmemorable. On the final day of the stay we had an Air India flight to Mumbai departing at 0645 so we decided to leave the hotel at 0430. After all, surely a reputable national airline would run a tight schedule…