It’s no secret that Starwood realises the Sheraton brand has some serious issues.

Even before the Marriott takeover, Starwood had already announced Sheraton 2020, a blueprint to revamp the tired Sheraton brand. This plan involved a $100M marketing campaign, opening 150+ new hotels by 2020  and converting 100+ premier Sheraton hotels to the Sheraton Grand tier. In other words, they wanted Sheratons to go from this 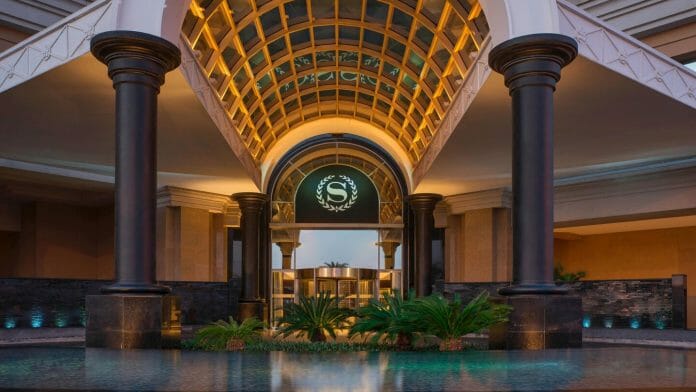 But would that be enough? When Marriott acquired Starwood, Marriott’s CEO said (regarding the Sheraton brand) “Some hotels are holding the brand back and might, over time, have to be deflagged.”

Which brings me to the quintessential airport Sheraton. I’m pretty sure Arne Sorenson had properties like this in mind when he talked about holding the brand back. 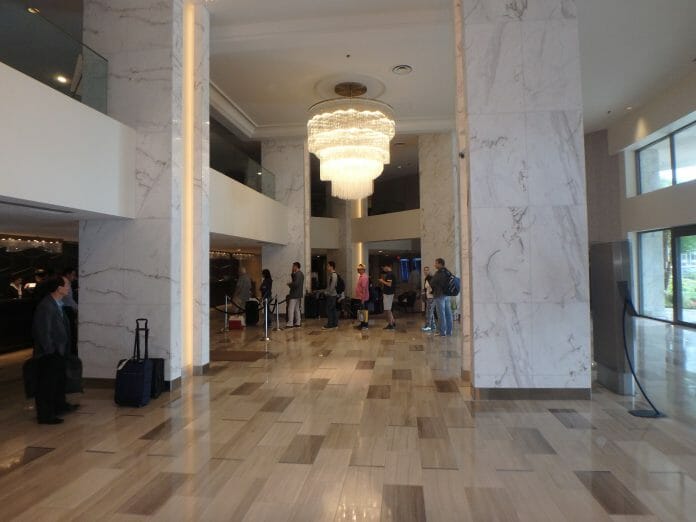 To be clear: it’s not a “bad” hotel by any means. It’s just a very “Sheraton-y hotel”. Sheratons aren’t the place you fantasise about staying at when you plan your dream vacation. Sheratons are the selected for location, not luxury. Sheratons are when you’re having a conversation with a colleague and tell him about your work trip and he says “so where’re you staying?” and you say “Sheraton” and he says “oh” and then changes the topic.

So, on to the Sheraton Los Angeles Gateway. The check-in line was long but fortunately they actually gave priority to the SPG elite lane (remember that you can get Gold status with a single stay through your World mastercard).  Still, it couldn’t compare to the line I saw in the evening when a shuttle bus dropped off 20+ people at one go. I felt sorry for the 2 desk clerks on duty then, having to juggle a line that stretched out the entrance of the hotel.

I had been upgraded to an executive suite on the 11th floor, which was probably the highlight of the stay given how notoriously tight-fisted US-based Starwood properties are about upgrades (compare this to the Asia-based properties which have consistently upgraded me to fantastic suites time after time)

The room was big. Like really big. Although it wasn’t two separate rooms it still had a large living room area with the writing table forming a semi-partition between the living room and the bedroom 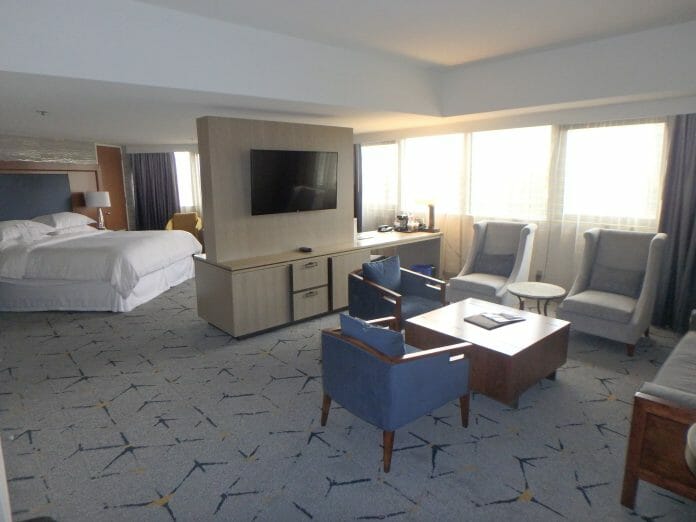 The desk didn’t have universal power plugs, which was surprising for an airport property. It did have 2 fast-charging USB plugs though along with the usual coffee machine and surprisingly not ridiculously overpriced water (US$3 for a 1 litre bottle). 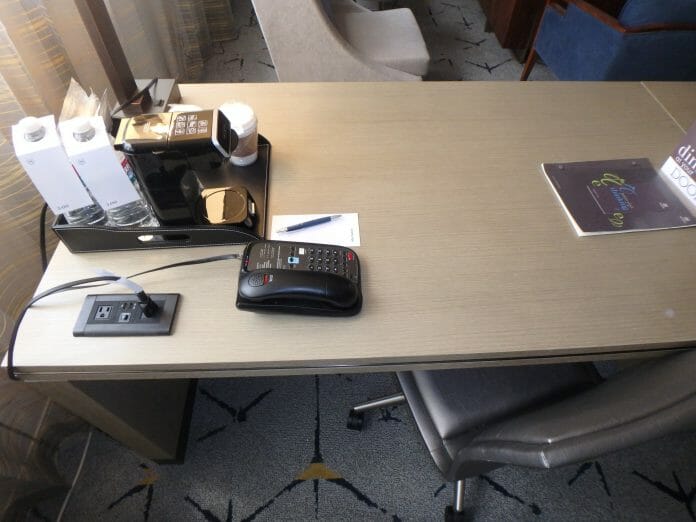 The bedroom had a spectacular view of the carpark, which I suppose is a defining feature of most Sheratons. 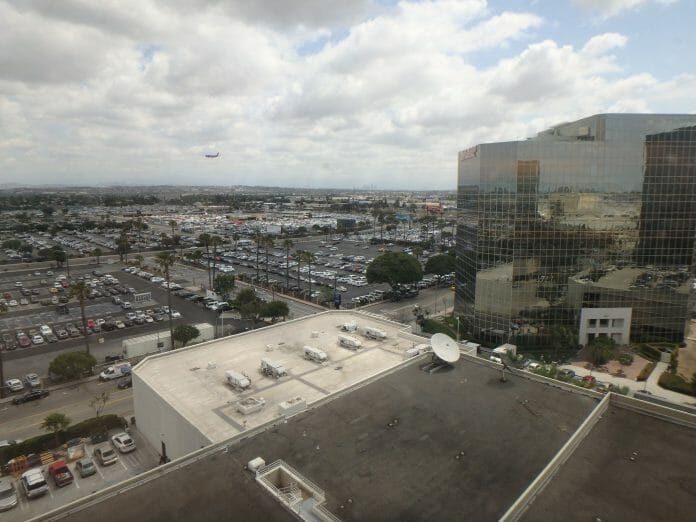 The bathroom had the usual assortment of Sheraton toiletries. If Sheraton really wants to reinvigorate the brand they would be wise to start with the toiletries, because the in-house Shine brand pales in comparison to what’s offered at similar competitor properties (eg Peter Thomas Roth at Hiltons) 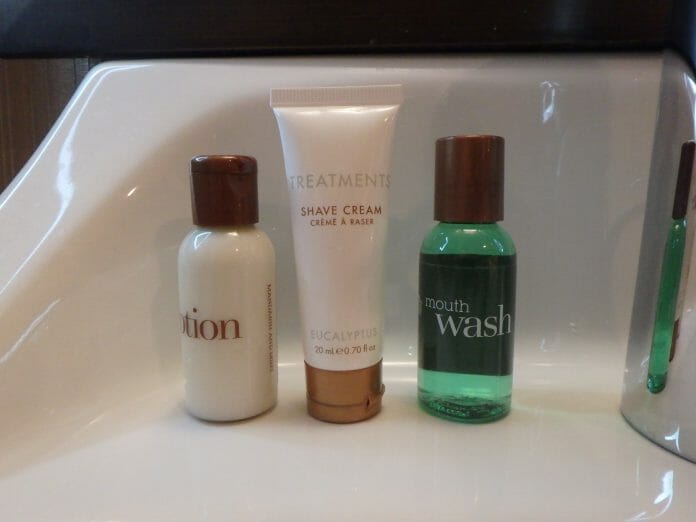 The sink had zero storage space for personal items. Fortunately, there was a small table next to it. If this is the standard-sized sink in regular rooms I can imagine it’d be quite an annoyance 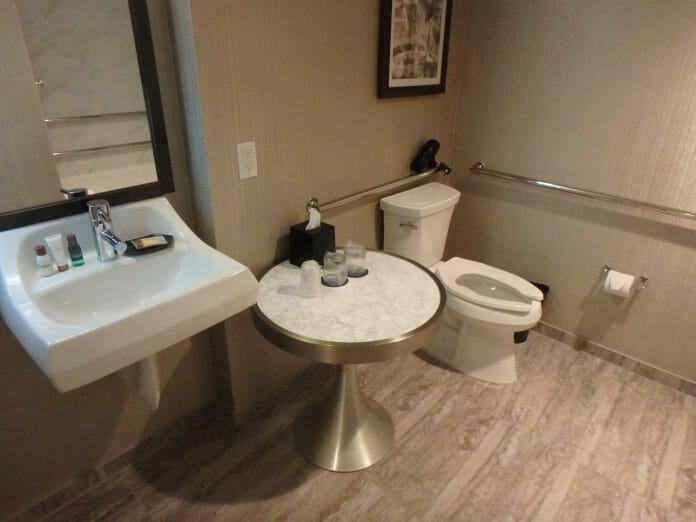 A tiny bathtub was on the opposite side of the bathroom. I do wonder why business hotels feel there’s a need to still go with bathtubs. I don’t imagine the majority of business travellers feel inclined to draw themselves a luxurious hot bath and soak in a tub that people probably pee in (not guilty). By having just a shower they could free up more space for a dressing table or something. 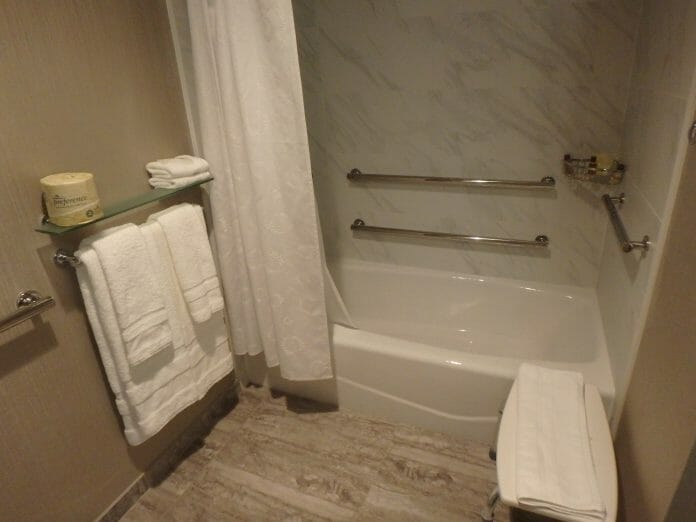 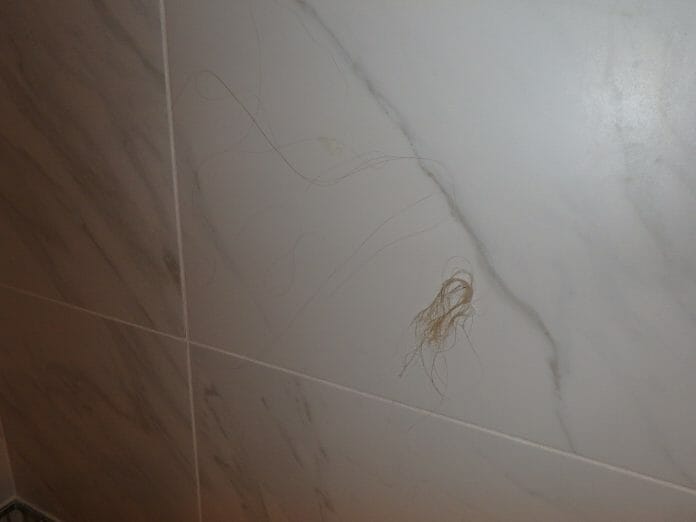 The property was 15 floors high, which given its proximity to the airport (you could see the runway from some rooms) was probably subject to a maximum  height restriction

On the 15th floor there was a lounge behind a keycard-accessed door. The lounge is technically for club room guests and SPG Platinum members only, but in practice there is very little stopping you from just inviting yourself in when someone opens the door to get out. Contrast this with the arrangement you find in most other Sheratons ex-USA where there’s a host at the entrance to take your room number 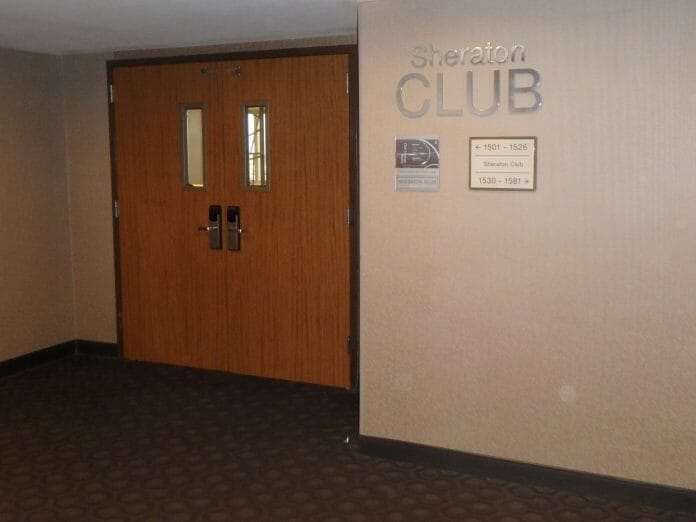 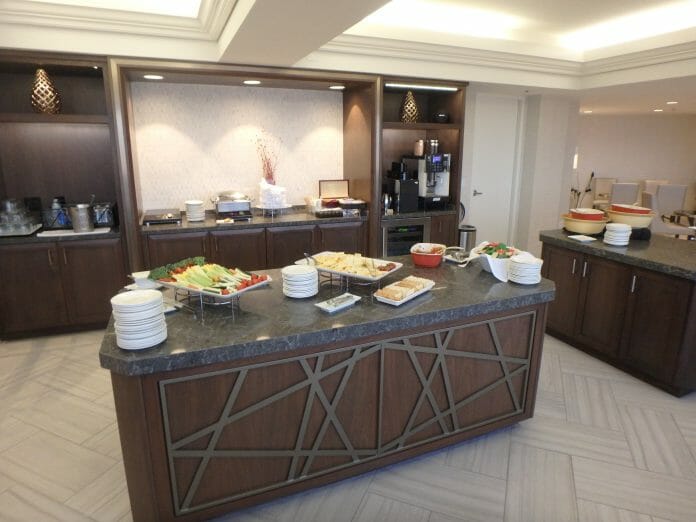 The food layout was a strange mix of everything. There was pasta salad with pesto sauce 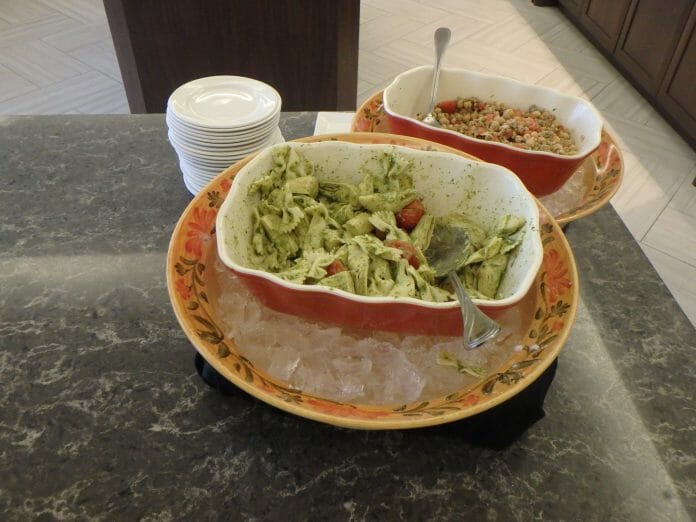 There was something they swore were meatballs (but everyone else in the lounge seemed to know better, judging by the uptake) 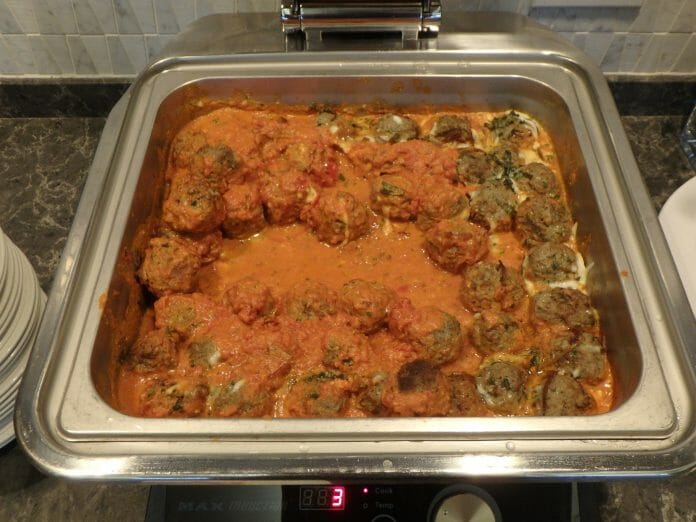 Fresh fruit and veggie sticks (which are quite hard to screw up, let’s be honest) 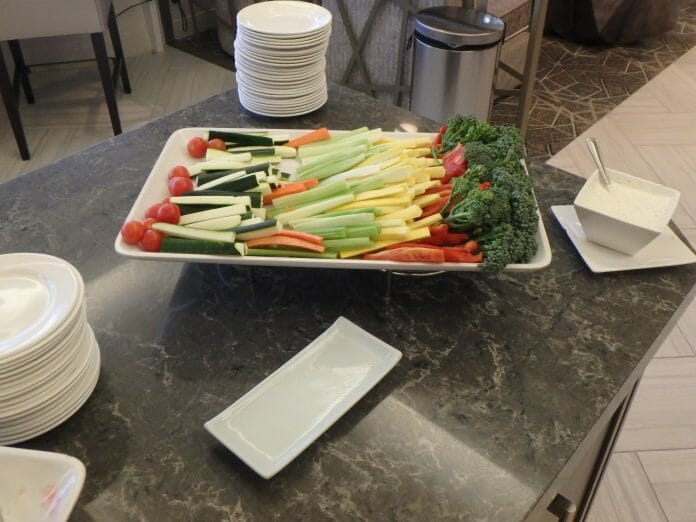 A cheese and fruit platter 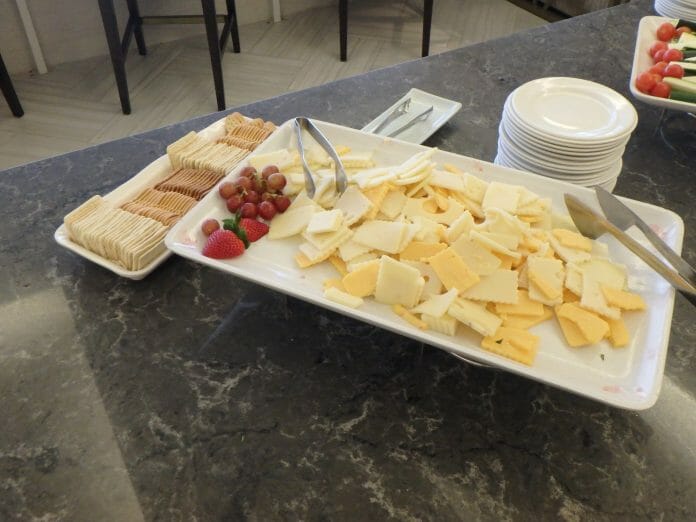 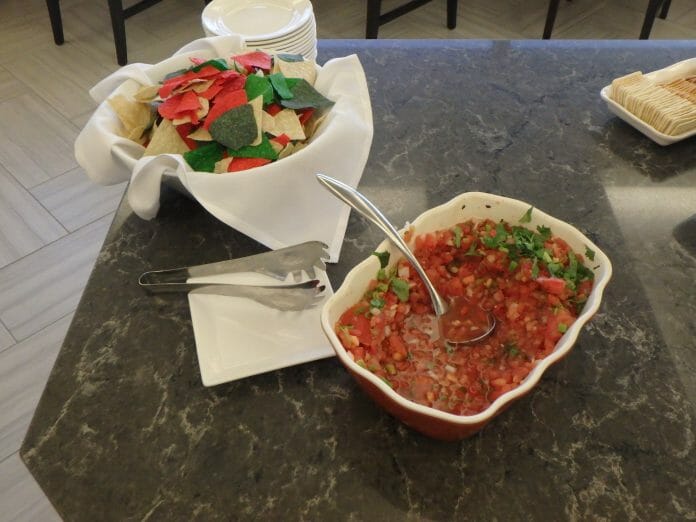 And a random assortment of soft drinks 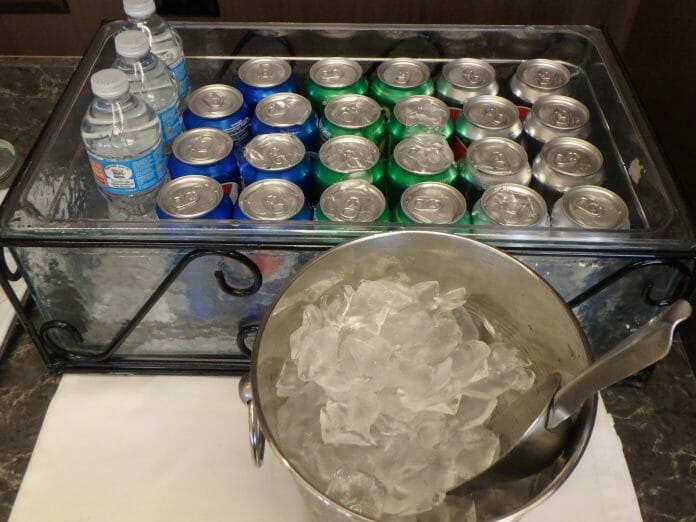 As is the case in most US Sheratons, no alcohol was available, even for purchase.

I never saw any more than 5 other people in the lounge, so it was a nice quiet place to work and watch planes land. 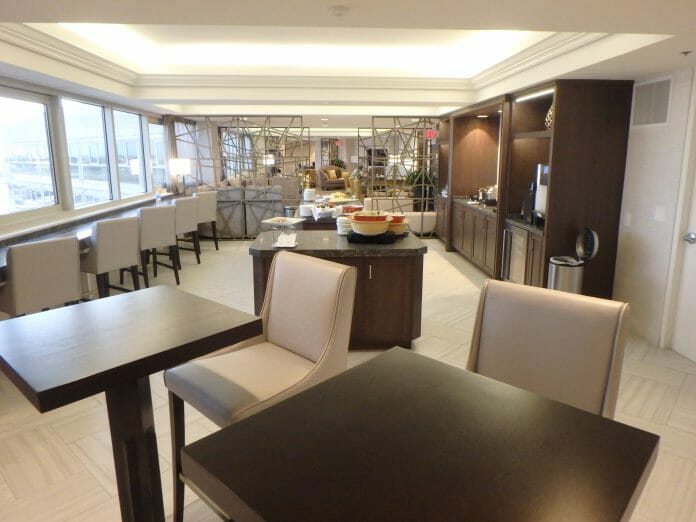 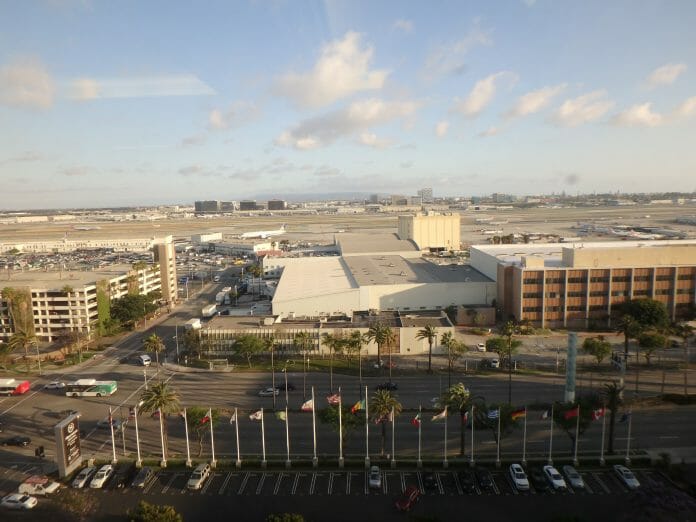 On the morning of the second day I explored the outside of the hotel. There was an outdoor pool area where you could take breakfast, but with the weather a brisk 17 degrees there wasn’t much uptake 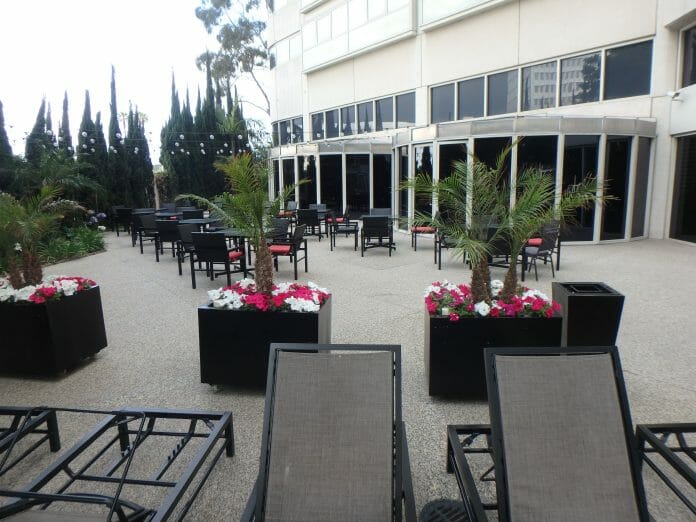 There were several cabanas by the pool, which was a bit of a curious decision given that the property wasn’t branding itself as a resort. I mean, does the average airport hotel passenger really have time to sit by the pool and sip a maitai? 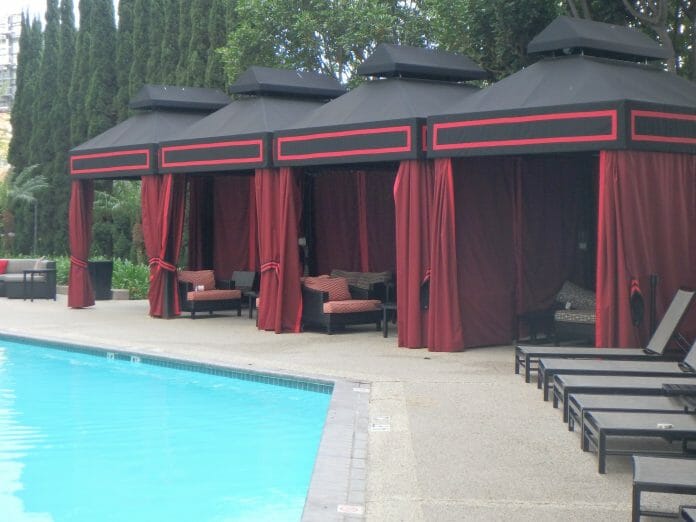 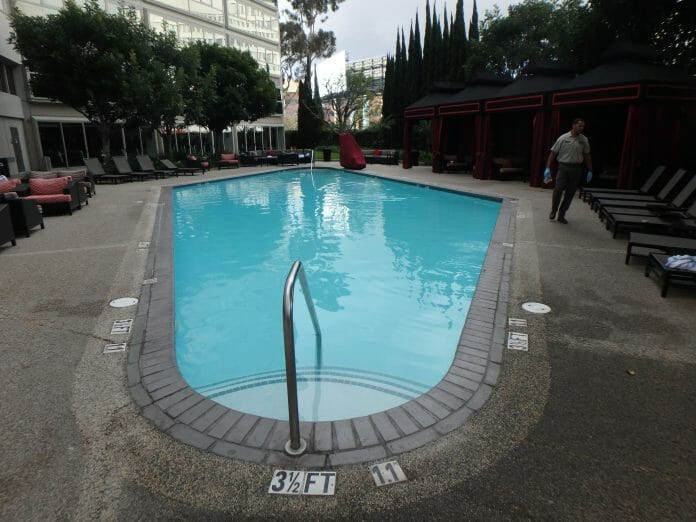 There was also a “spa pool” with hot water, but there were so many discarded towels strewn around it the whole setup just looked dodgy.

Breakfast was a small-scale affair. I opted to have it in the main restaurant instead of the lounge, figuring that it would have a larger spread. 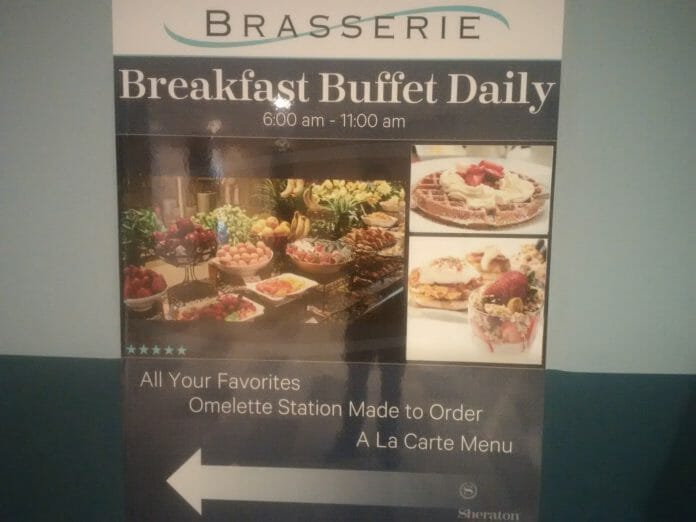 In reality though the spread was equally small, the main difference being the addition of an egg chef in the restaurant. 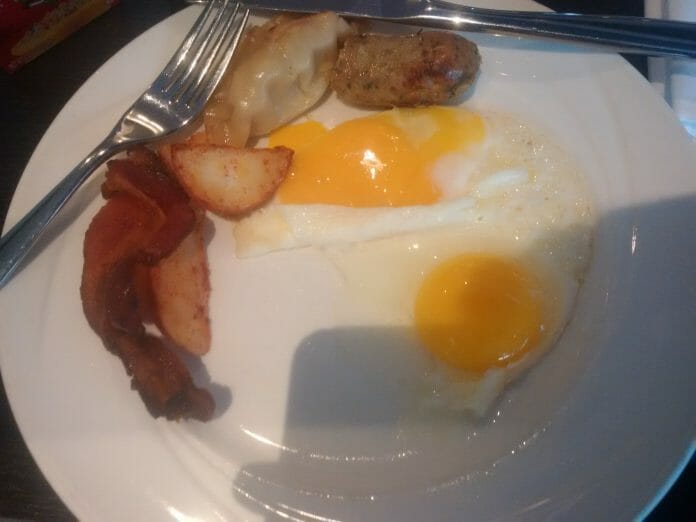 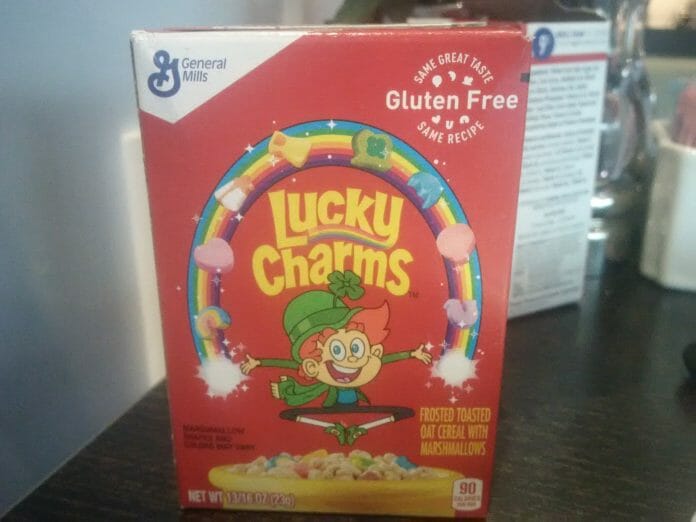 Random gripe: The property charged a $5 handling fee for each package received. I cannot understand the purpose of this fee, especially when other hotels are perfectly fine signing for and storing packages for free. I mean conceptually how hard can it be? I was having 2 packages redelivered to me after the Avenue of the Arts hotel lost them, so ended up having to pay $10 out of pocket. I briefly contemplated asking the Avenue of the Arts to reimburse me for this as well, but decided that there had to be some logical point at which their financial responsibility for the loss ended. After all it wasn’t there fault that the Sheraton wanted $10 for what essentially amounted to signing for 2 packages.

What is the fundamental problem with the Sheraton brand? I think the one word answer is “joy”.

Sheratons have this general miserable feel about them. Perhaps it’s because they’re so closely associated with work, or being away from family, or because I have yet to see a Sheraton that incorporates natural light as a feature.

But I’m trying to think of the last Sheraton stay that I truly enjoyed and I’m coming up blank. Over the years I’ve stayed at numerous Sheratons- Times Square, Towers Singapore, Sao Paulo, Casablanca, Hongqiao, Pudong

The best of that lot was probably the Sheraton Pudong, and it’s quite telling that that property has been reflagged as a Sheraton Grand representing the best Sheraton had to offer. 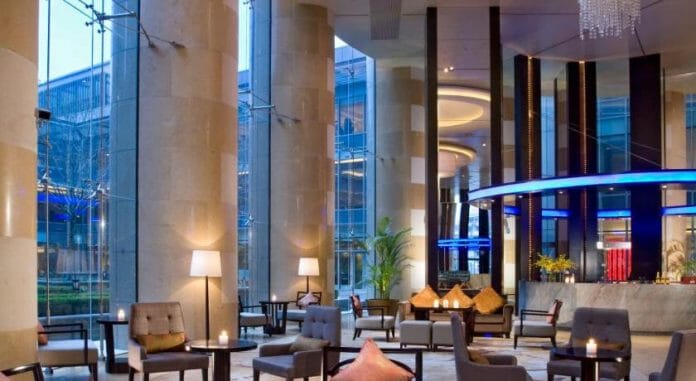 Would I stay at a Sheraton again? Of course. Let’s get things in perspective. Sheraton hotels are clean (well, hair in my bathroom excluded), they’re predictable, they’re functional. A Sheraton will give you a good night’s rest and get you on your way the next day. And for some people, that is all hotels need to do. But for those of us who think a hotel needs to be more than that (and the Sheraton’s below par brand performance suggests there are more of us than you think), the Sheraton is in desperate need of a spark.

Aaron Wong
Aaron founded The Milelion to help people travel better for less and impress chiobu. He was 50% successful.
Previous articleProtip: How to book cheaper RTW tickets
Next articleThe Milelion is featured in the Straits Times!

Peter Roth Thomas in Hilton isn’t that great but I must agree with you that it looks miles better than what Sheraton is offering.

yeah i get what you mean. i mean even le meridien uses cinq modes which i know isn’t a great great brand, but it sure looks a lot better than shine. lucky from OMAAT has commented how out of place shine toiletries look in a luxury resort like the sheraton maldives and i tend to agree

The sheraton grande in bangkok is quite nice. I especially like the butler service with 24/7 freshly squeezed orange juice…

yes, so i’ve heard! but did you know the sheraton grande sukhumvit in bangkok is not a sheraton? it’s part of the luxury collection. interesting right? apparently this was one of the legacy sheratons from long long ago, then when the sheraton brand was acquired by starwood it was designated a heritage property and part of luxury collection.

my first foray into the spg world was Sheraton grand cotai in Macau. I thought that was awesome!

next 2 were four points by Sheraton in San Diego and Los Angeles. judging by your photos, am I glad I paid less to get somewhat the same in those two! haha..

Think the best Sheratons I have been to are Walkerhill Seoul and Sheraton Towers Singapore.

Sheraton Maldives was okay but overpriced in my opinion for the quality.

Sheraton cotai was quite nice and generous for upgrade. Sheraton pattaya was good as well, unfortunately they have since left the spg family.

i have a friend who frequented sheraton pattaya, he sent me photos and i thought it looked a bit dumpy tbh. but anyway intercontinental is managing that place now right?

This added a few places to my bucket list. Some of these places are so beautiful.