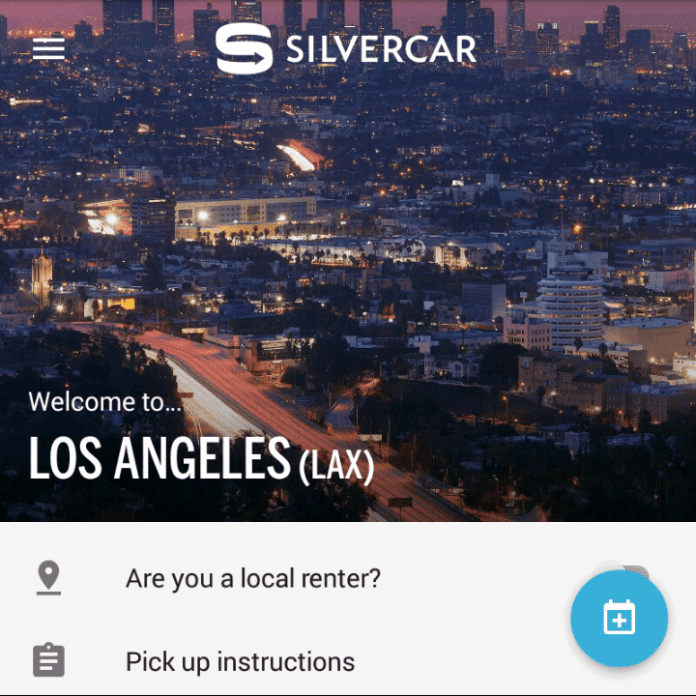 Silvercar is a startup car rental service that rents one and only one type of car- a silver Audi A4. All cars come equipped with GPS, satellite radio and a built-in free WiFi hotspot. They currently have operations in

I like Silvercar because of their fair policies. For example, if you drop off a rental car at a traditional agency with anything less than a full tank, they’ll charge you 2-3X the market rate for whatever petrol is needed to fill it up. Silvercar charges you a flat fee of $5  plus whatever the market rate is for gas.

Tolls are another thing. Most rental companies charge ridiculous rates for using the electronic tolling system in the car. Oftentimes they may charge a day-use rate once you’ve used the toll for the first time, even if you only used it once. For example, if the day-use rate is $5 and the toll is $3, if I use a toll on the first day of the 3 day rental I’ll be billed $5 *3 +$3, which is downright ridiculous. Silvercar charges you exactly the amount you paid for the toll, nothing more.

I had a coupon that gave me one day free with a two day rental (LOUNGEBUDDY if anyone wants to use it) plus I used a referral code when starting my account that gave me a US$25 gift card after my first rental. If you want to sign up you can use my referral code here (NOGRVPMX) and get $25 as well. 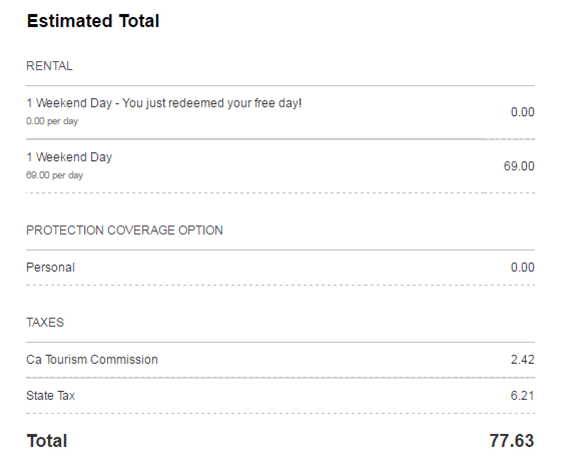 For comparison, I would have paid US$80 with the traditional rental agencies and gotten their smallest available car. 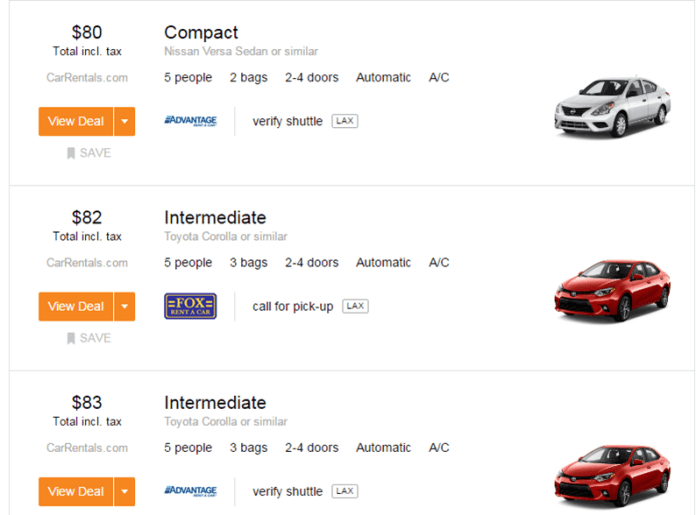 Finding the pickup spot proved challenging but that’s probably because it was my first time flying into LAX on an international flight. 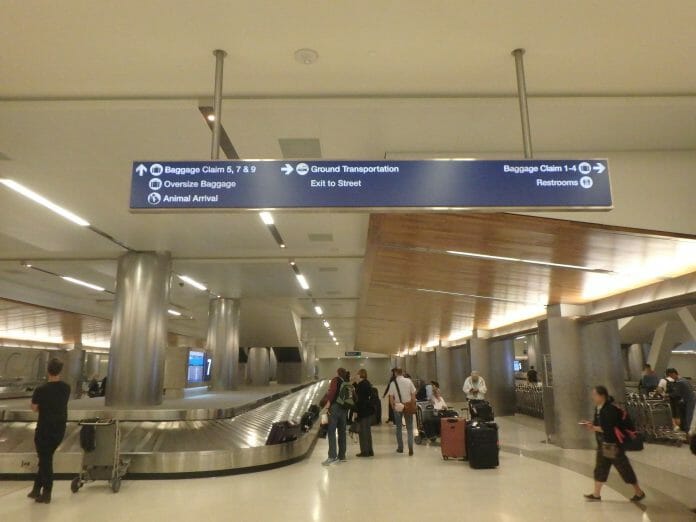 After baggage claim you’ll go through customs, and then you’ll exit the secure area into the public area 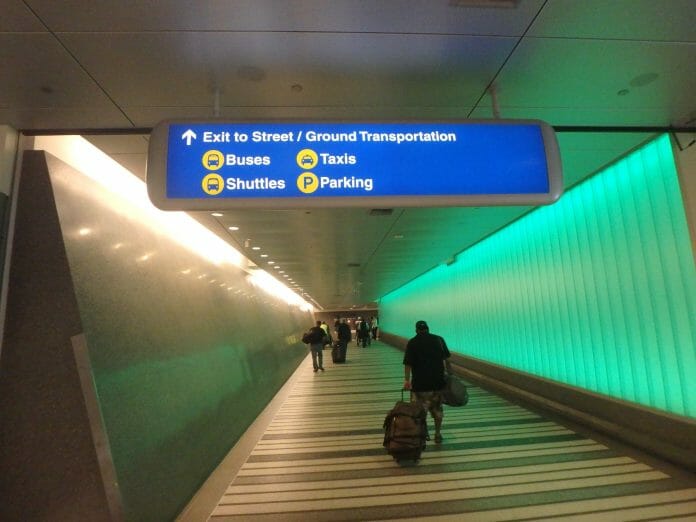 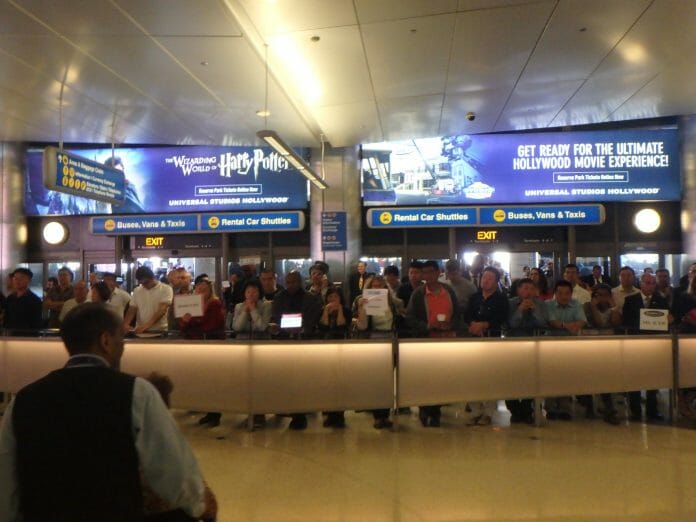 Look up and see the sign for “LAX Shuttle Airline Connection”. 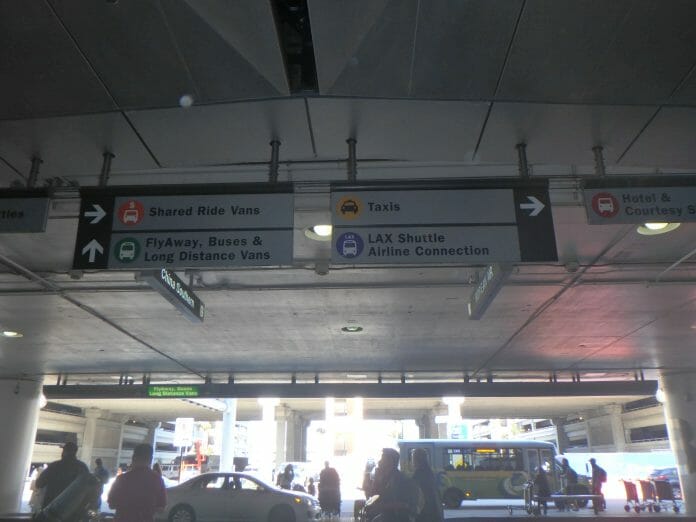 This is the waiting point 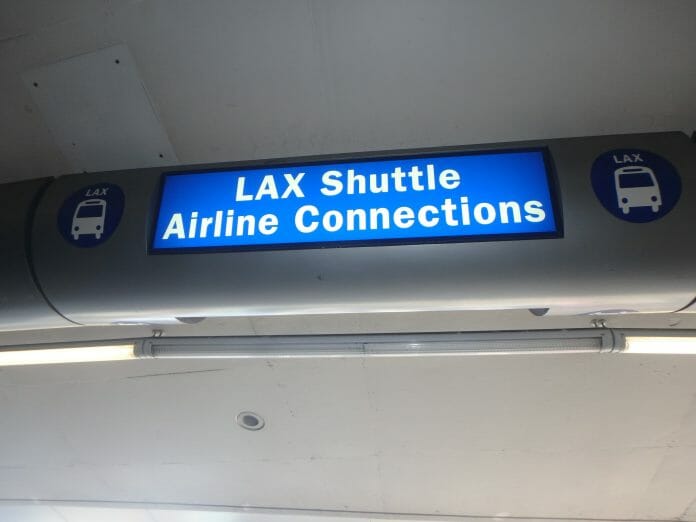 This sent an automated text via SMS to Silvercar 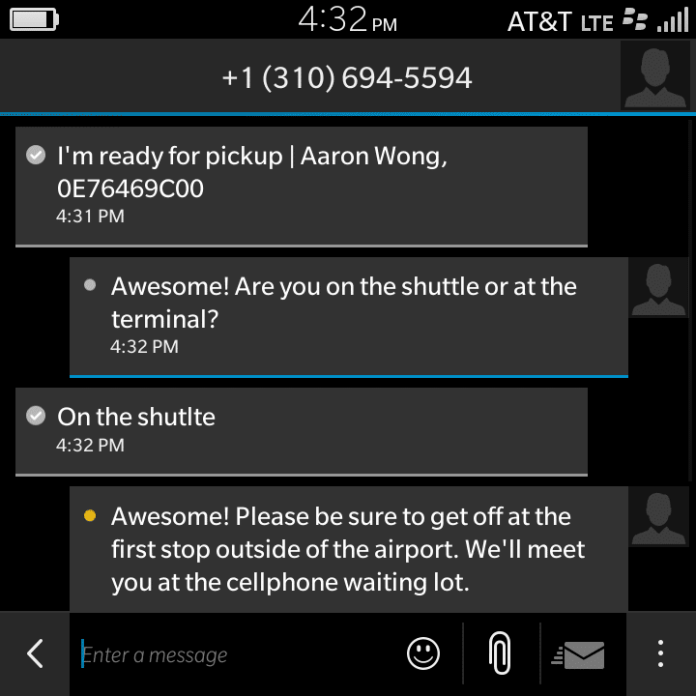 And when I got off my pickup was waiting The Silvercar rep drove me to their facility which was about 2-3 mins away. He told me that in the future I could just call them directly and they’d fetch me from the terminal, avoiding the whole hassle with the shuttle.

Silvercar has about 200 cars in LAX and as you can see business is good. The guy who gave me a quick garage tour said they’re typically running at 80% utilization. 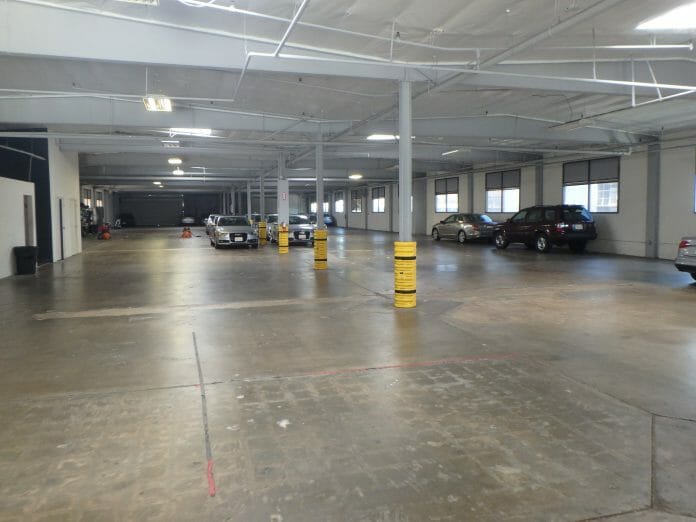 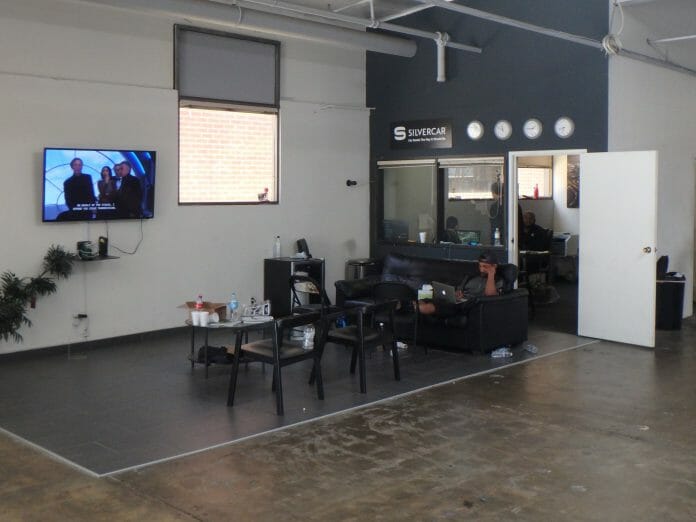 Once you’ve run through the damage check, license verification and credit card verification, you use your camera phone to scan the QR code on the windscreen and you’re all set. 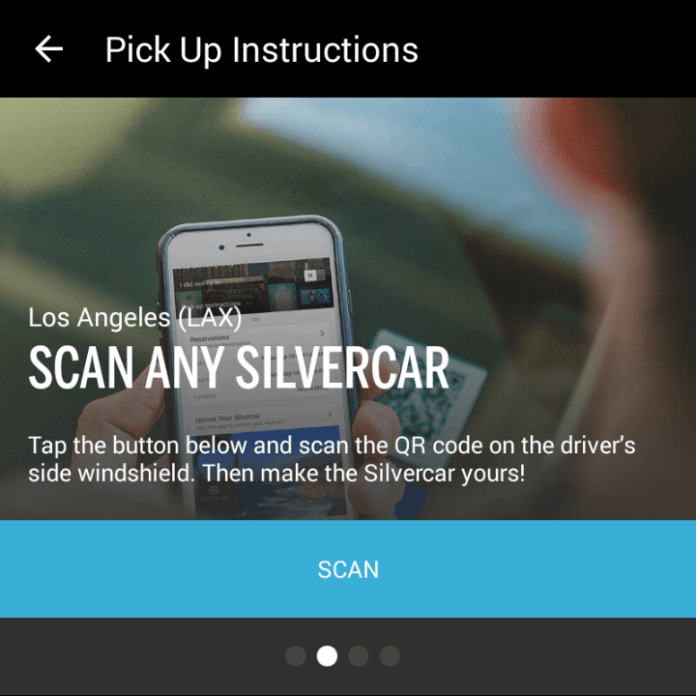 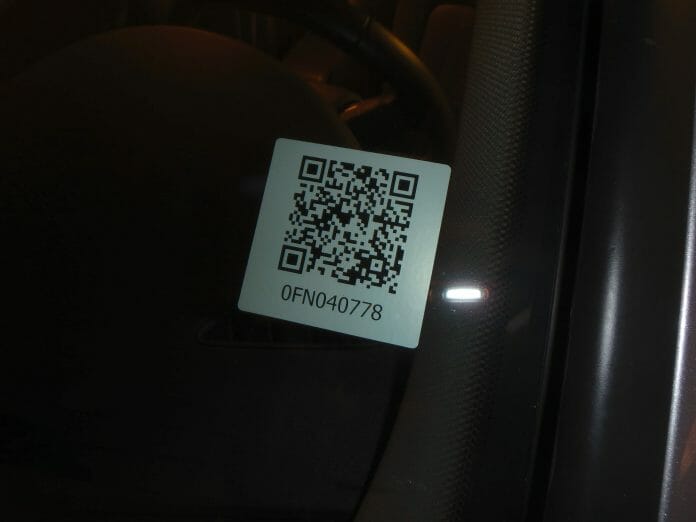 If I had any gripes about the car, it would be that it doesn’t have keyless entry and go, which is surprising for an otherwise high-end model. Can you imagine that once upon a time people had to insert a car key to start the car? I know right. Soon you’ll be telling me that people had to drive themselves too…

The car also didn’t feature the automatic engine start/stop which is common on a lot of mid-range/high-end cars these days. I know some people find the sudden engine cutoff annoying but apparently it’s good for fuel efficiency.

I tested the car’s built in WiFi hotspot and it ran like a charm. I can imagine this being very useful to you if you haven’t got a local sim card yet or want to tether multiple devices.

In terms of the actual driving experience, it’s definitely nowhere as fun to drive a BMW, but a heck of a lot better than whatever Toyota/Nissan your typical rental car company would give you for the same price. The A4’s handling is quite nuanced and the pickup was very good. Being a law-abiding citizen I didn’t test the engine at any speed over 65mph for protracted periods of time, but I was able to get rapidly up to 70-75 when overtaking. 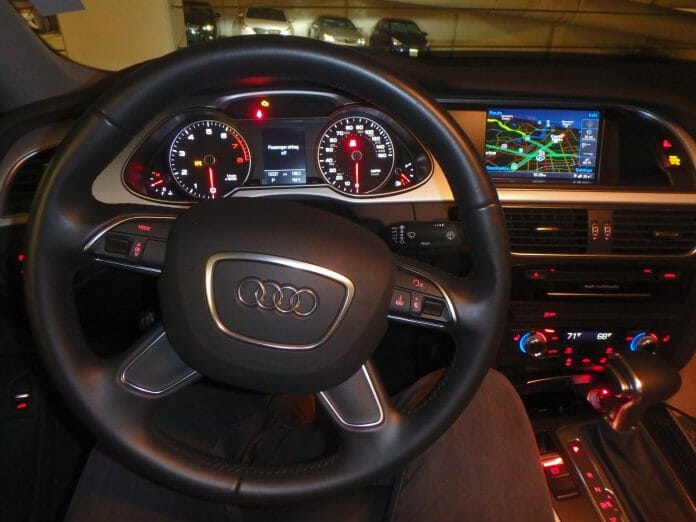 The returns process was painless too. The Silvercar valet even dropped me off at the Sheraton Gateway instead of at the airport terminal (it was pretty much the same distance but I appreciate the flexibility).

Within 1 hour of dropping off my car, I got the following email confirming my US$25 gift card. Remember that if you want to try Silvercar you can use my referral link and we’ll both get a US$25 gift each. 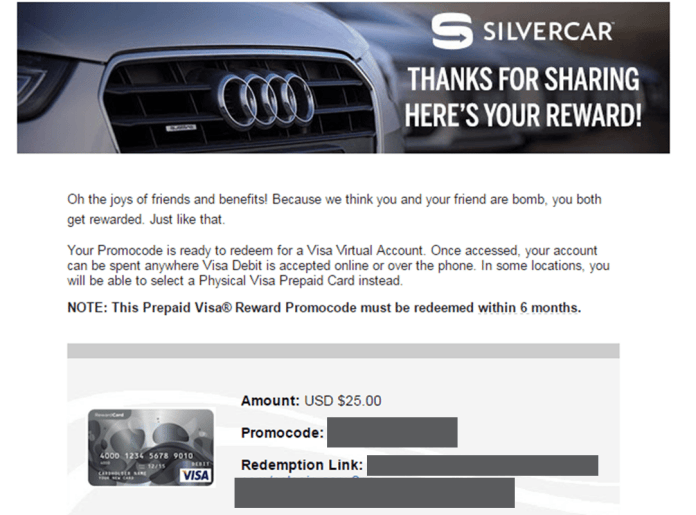 To sumarise- I’m not sure if I’d be willing to pay full price (US$69 a day) for Silvercar, given that I can usually get a perfectly good mid-sized vehicle for US$40-50, but if you’re only renting for a short period and can make use of both the US$25 sign up credit + one day free rental code, why not treat yourself?

Interesting and I’m still trying to figure out what the catch is. 14k miles really isn’t too bad. Is the problem that you can only pick up and drop off at airports?

i’d say the catch is more like if i didn’t have the 1 free day coupon the whole thing would have cost US$69 a day, which for an audi a4 is still a good deal, but i’m not sure I’d be willing to pay that much on leisure travel. you should be able to ge ta decent rental car for $40-50 a day at most airport locations and $30-40 a day at off airport locations (airports are more expensive because of the surcharges, SFO in particular you might end up paying closer to $60-70 a day) you can do one… Read more »

Hey i’m signing up for Silvercar now with your link! Enjoy the credits! By the way i noticed that they asked for the expiry date of the Driving License – Singapore licenses don’t expire right .. what did you put there?

thanks joe! i just put some random date 50 years from now. when you rent for the first time they’ll look at your license but the expiry date isn’t important.

Awesome thanks! Enjoy your trip! Really love your blog, do you happen to have have an instragram documenting this RTW trip ? 😀

thanks joe! you know i’ve been thinking about that for a while but i am hopelessly inept on social media. it’s one for the to do list though.

signing up using your referral code for upcoming US trip, pick up at LAX. Aaron, see that you selected personal for your insurance coverage. The CDW is costly USD$49 per day. What sort of insurance did you buy on your own for California.

i had third party insurance offered by worldwideinsure. i’ve written about that in the rental car section on the blog

Thanks, I have entered NOGRVPMX (hope that’s the right code) as referral code.

[…] I remembered – I have that prepaid US$25 gift card from my Silvercar rental. Seems as noble a purpose as any to use it […]

[…] I remembered – I have that prepaid $25 gift card from my Silvercar rental. Seems as noble a purpose as any to use it […]