After Mexico City my next destination was Sao Paulo and there were several ways of getting there via Star Alliance. Unfortunately, the most direct ways involved flying on a narrow-body aircraft with Avianca (AV) or Copa (CM). This would mean at least 11 hours of flying on this It’s certainly better than flying economy, but those aren’t the seats you want to be in for a long haul red-eye.

While tinkering with the Star Alliance booking system I found a routing that would take me to Sao Paulo via Houston. It’s a bit of a strange routing if you look at it on the map because you double back to Houston first before flying south to Sao Paulo 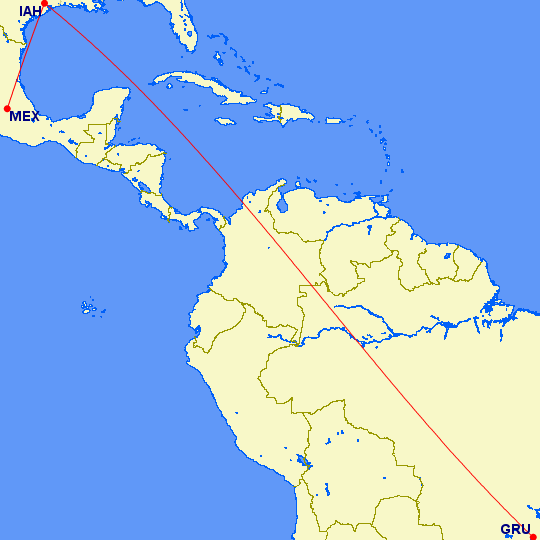 But there were good reasons for choosing this. Although MEX-HOU would be on United’s extremely underwhelming domestic first class product (which I’d written about previously), HOU-GRU would be on their B767-300 which had the old Continental Airlines business class seats. 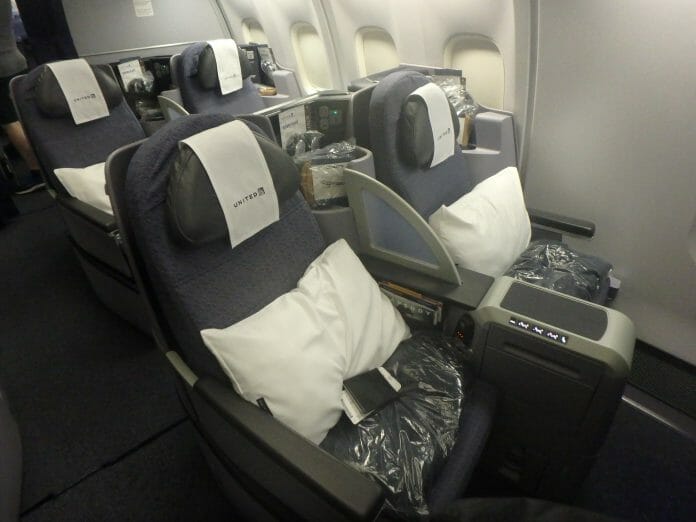 With a 2-1-2 configuration these were hardly the industry standard for business class, but a flat bed on a red-eye beat a recliner seat anytime, even if it meant 5 additional hours of flying time on United overall. This arrangement found me on a short 2.5 hour hop from MEX-HOU. I’ve already written about the hard product experience on United’s domestic first on the LAX-MEX leg, so I’m going to talk more about the other aspects of the experience instead.

I gave myself plenty of time to get to the airport given how our 20 minute journey turned into 90 minutes the first time round, but I was at the airport within 30 minutes. 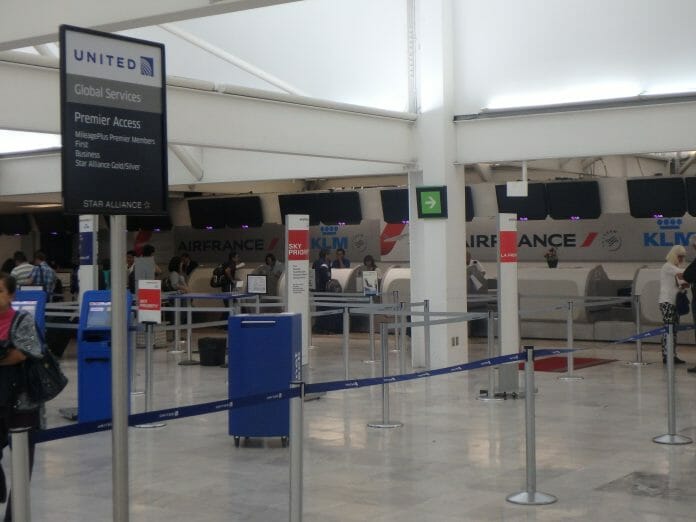 Check-in at Mexico City airport was fast and painless. As was the case in LAX, all the check-in stations were self check-in kiosks, which are great, except when they don’t work. 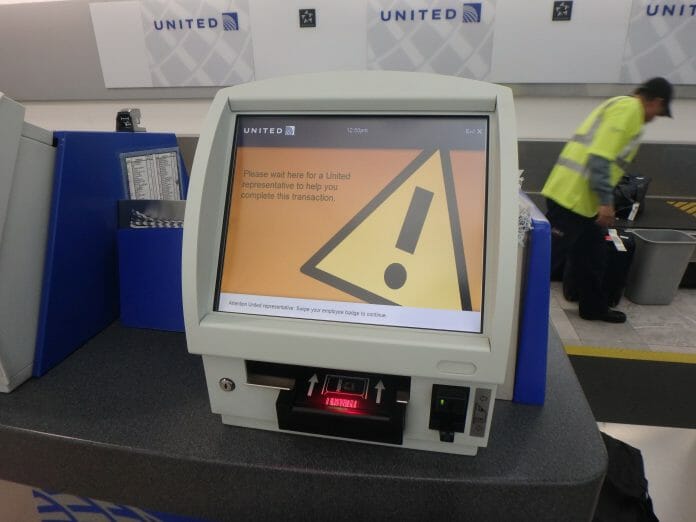 No sooner had I taken this photo than an agent materialized at my side.

At this point I decided the problem in their systems was not technical, but human.

Boarding passes for both legs were printed and my check-in was routed straight to GRU. Note that if you are transiting in the USA en route to a 3rd country, you do not need to reclaim your bags and check them again (versus if you’re transiting from your first USA destination to another USA destination, eg SIN-SFO-PDX requires you to claim your bag in SFO and recheck it)

Mexico City airport really isn’t anything to write home about. It’s basic and functional and certainly not a place you’d want to spend more time than necessary. 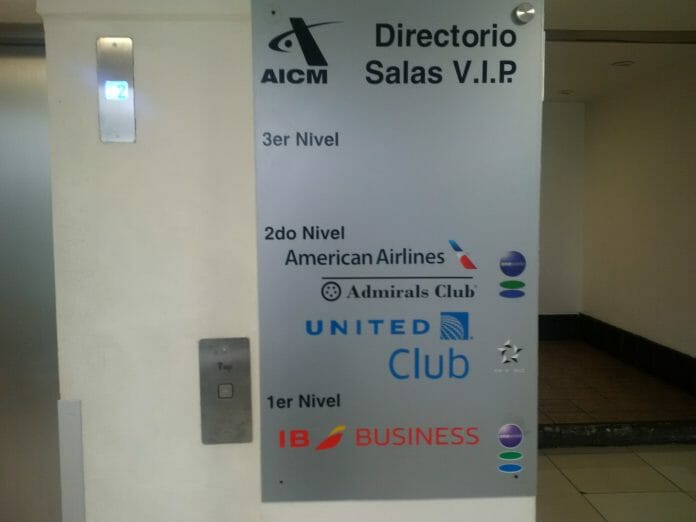 The United Club in MEX is really easy to miss because it’s up an elevator near the place where you clear security. I totally overshot the lounge and walked 10 minutes to the gate before realising it was right back where I came from 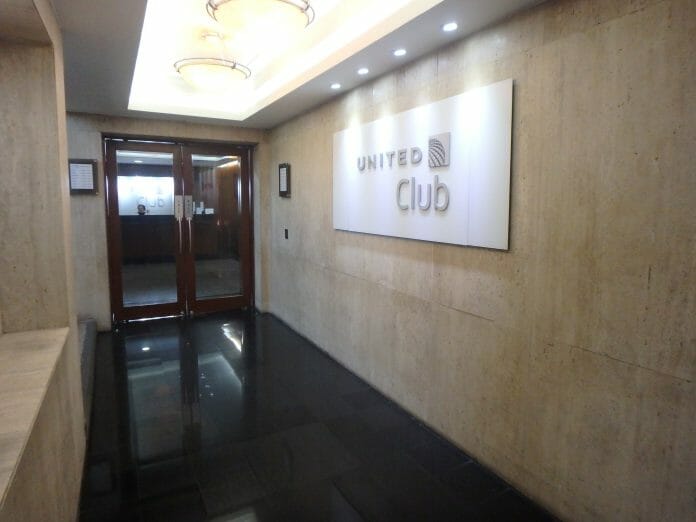 The lounge was pretty empty, but then again it was a mid-day Saturday departure 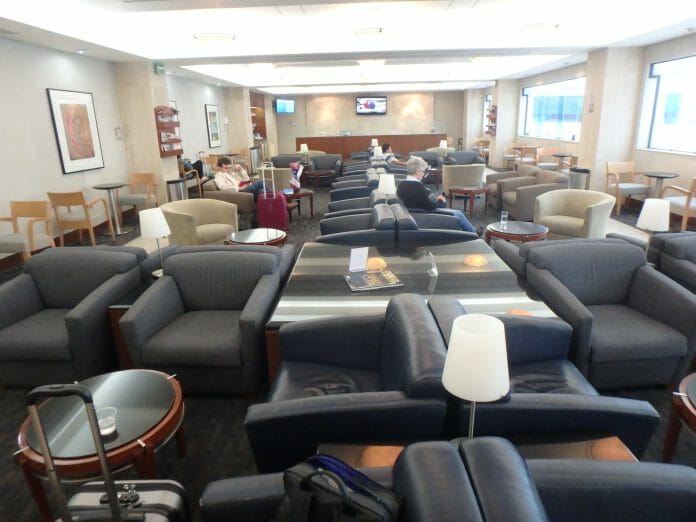 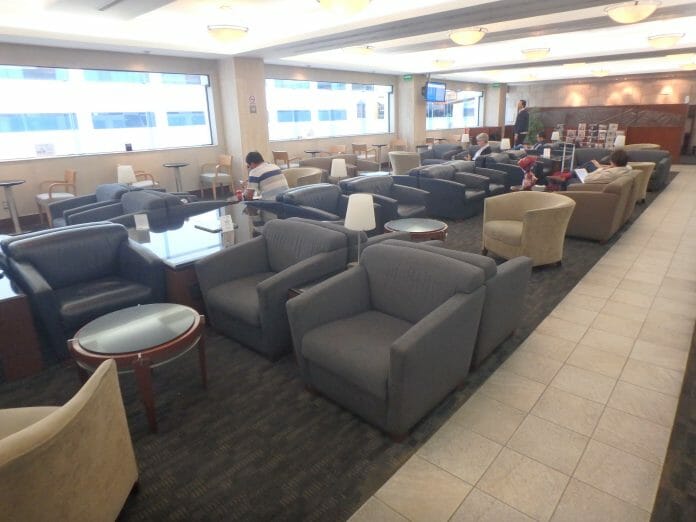 The food layout was what I had come to expect at most United Clubs- sparse, spartan and suspicious looking 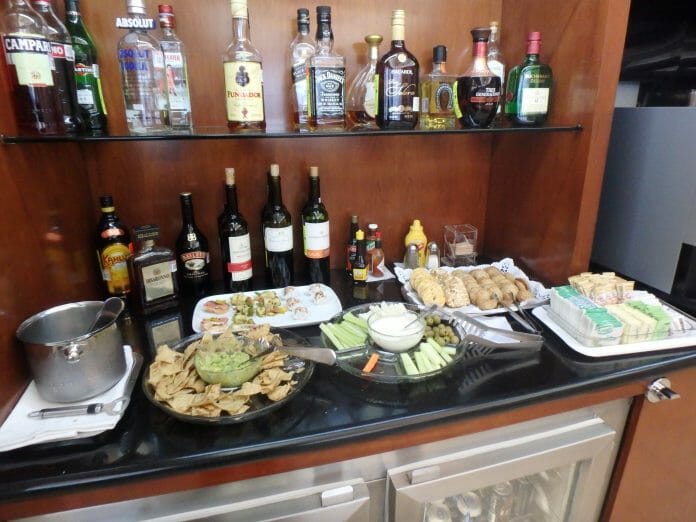 I love guacamole, but I was quite hesitant to try guacamole that looked like it’d been sitting out for at least a few hours. Similarly, the other items on offer were soft and stale, probably the victim of being left out too long.

One of the nice things about United Clubs outside the United States is they have free booze. Compare this to LAX where there was a cash bar. 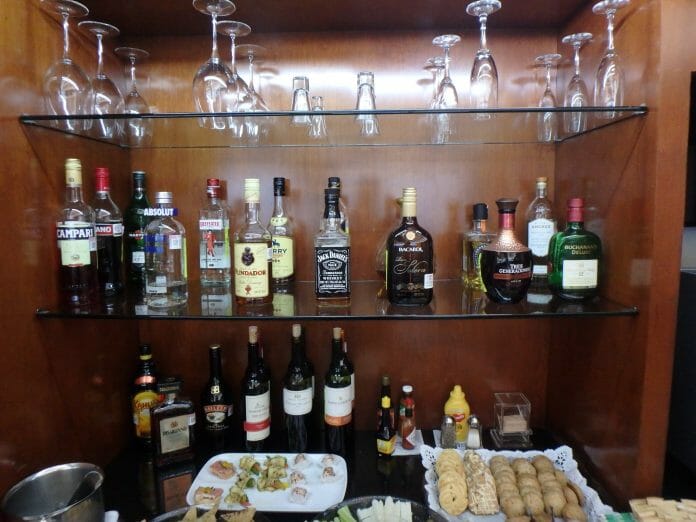 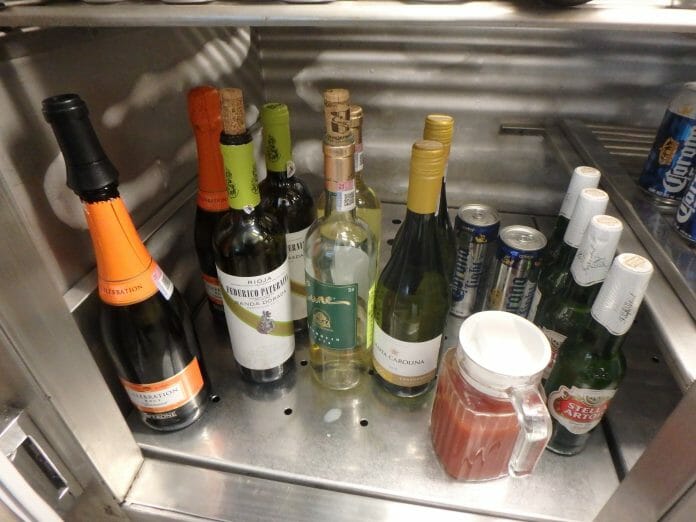 There was sparkling Chilean wine 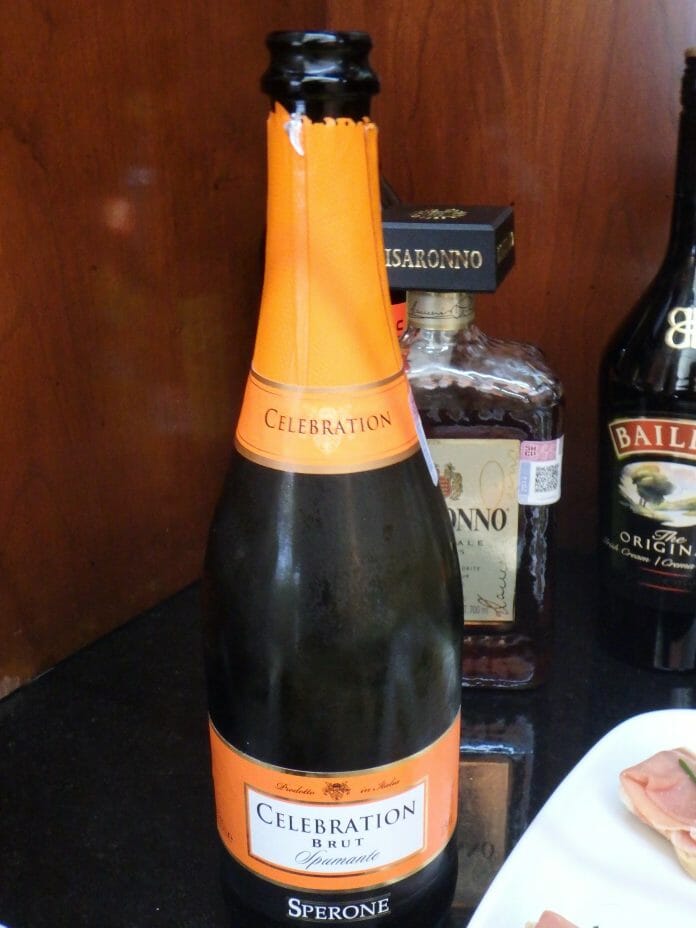 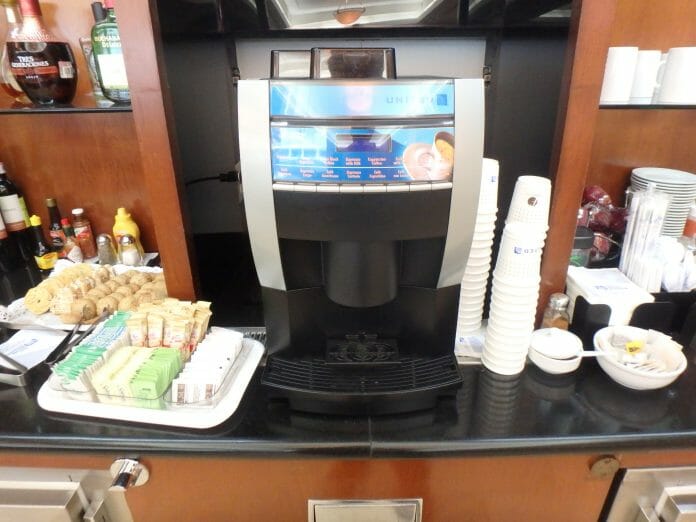 A selection of cheese and fruit skewers. And that was that. 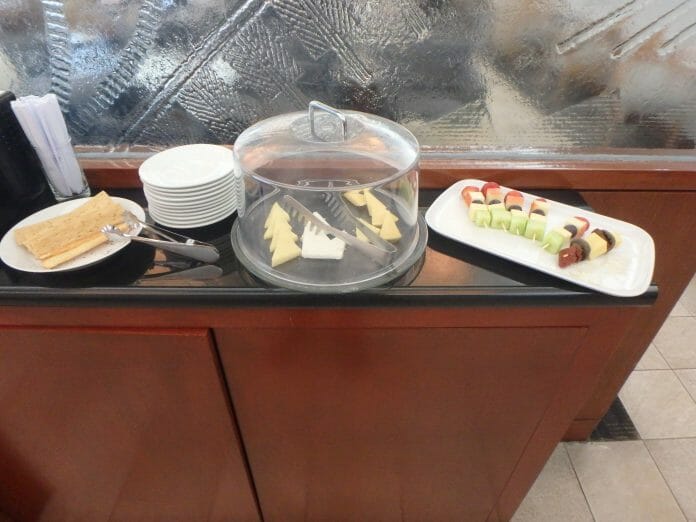 If you didn’t like the food offerings in the lounge, there was always the food court, as the helpful view from the lounge showed. 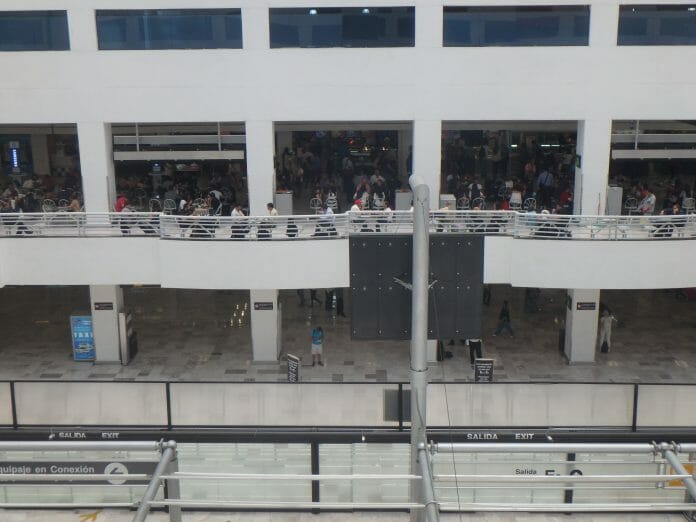 The United Club also had a business centre, which sort of affirms my theory that United Clubs are built for function over form. They’re definitely great distraction-free places to get some work done. There’s no risk that you’ll get sidetracked by a spa treatment or other forms of happiness. 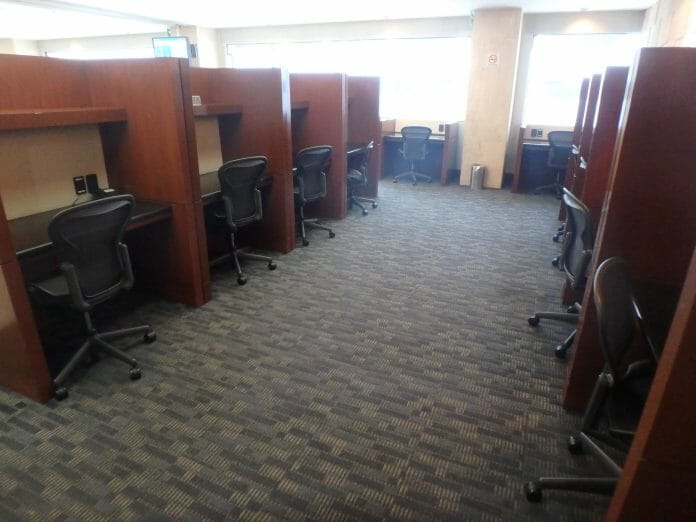 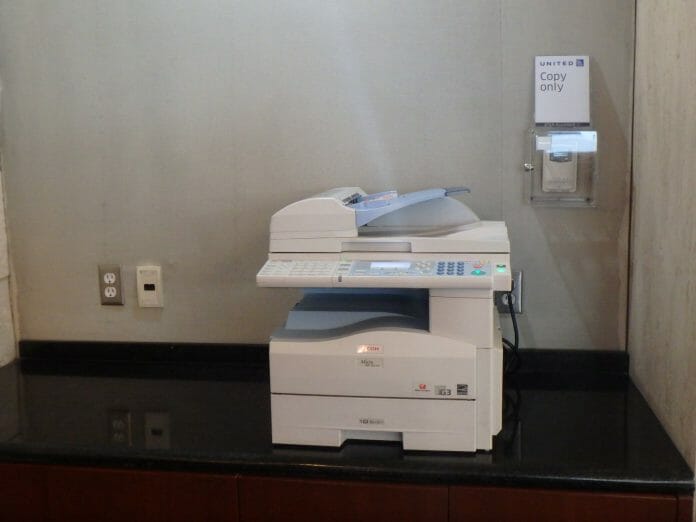 Boarding was the usual scrum, given that United treats Mexico as identical to the US in terms of cabin baggage restrictions. Again I was in boarding group 1 and managed to get in without much difficulty. 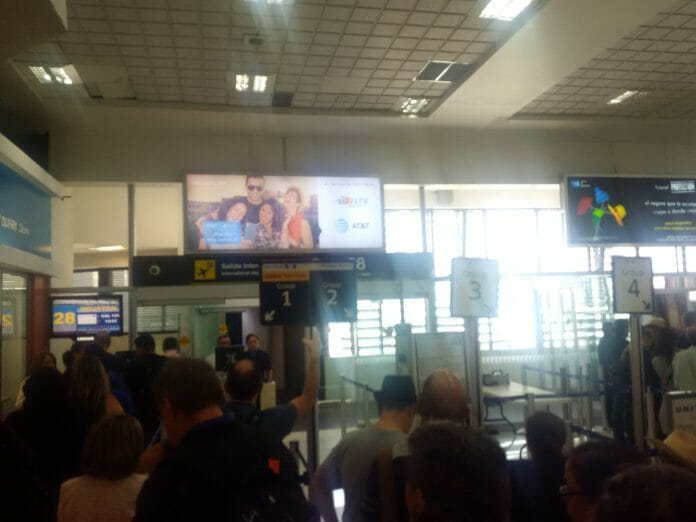 During boarding I heard the senior flight attendant giving the junior one a real talking to. One of the passengers asked her later what that was all about, to which the senior FA said “They’re sending us all these 21 year old attendants fresh out of training and the only thing they train them on is safety. That’s it. No service training at all, that’s all done on the job. She doesn’t know where the meals are. She doesn’t even know we have alcohol for sale on this flight.”

I was quite shocked to hear this, but then again I live in a bubble where I’m attended to by SQ stewardesses who train for 15 weeks in a $47M facility on everything from wine tasting to emergency defibrillation.

There’s an excellent article on Travel+Leisure about the training that SQ cabin crew go through, and if you haven’t read it yet it should be mandatory reading (although it is a bit dated- mentions of 747s and champagne in economy class (I didn’t know champagne was ever served in SQ economy)). Here’s an excerpt

SIA has the longest and most involved training program of any airline. It certainly requires a great deal of paper. Several 40-page booklets are dedicated to subjects such as deportment (“Having a slight forward-leaning body posture gives a friendly impression”), grooming (“Strive for a well-balanced diet to achieve thick, glossy hair”), and passenger management (“The tone of your voice should be pleasant and varied”). There’s even a section on determining a passenger’s surname: Tom Brokaw is Mr. Brokaw, but Zhang Yimou answers to Mr. Zhang. Trainees can also sign up for extracurriculars in wine appreciation, “lifestyle planning,” speed-reading, dance—all on the company’s tab.

So the next time you think about complaining about the service on an SQ flight, well. It could be worse.

Before take off meal orders were taken. I know menu cards aren’t du jour on domestic first class flights anymore but surely the stewardess could do a bit better than “chicken or beef”?

I read an article that customers are willing to pay more for a dish the more words are used to describe it. I certainly can imagine a few people who would pay more for Chicken Rice if it were described as

Warm nuts were served. I’m glad SQ has started to copy the American airlines and offer their nuts in a warmed bowl. It does make a world of difference, kind of like how heating up bread makes it infinitely better 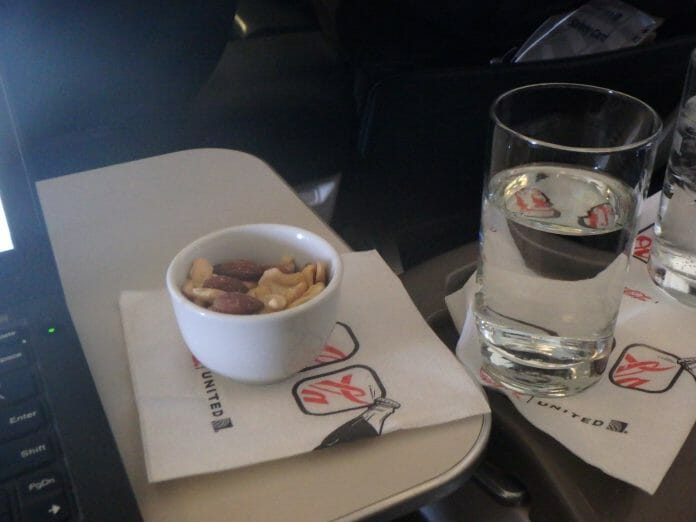 I had the beef, which turned out to be something like this 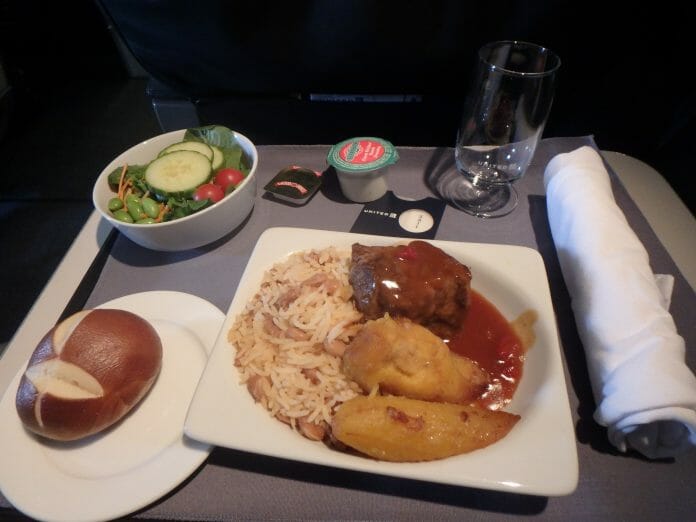 I’m not one for any rice that isn’t Jasmine or Japanese, so most of the meal went untouched. After 15 minutes the stewardess came by to  clear it.

“It’s not without its charm”, I responded diplomatically

She grunted something inaudible and took it away 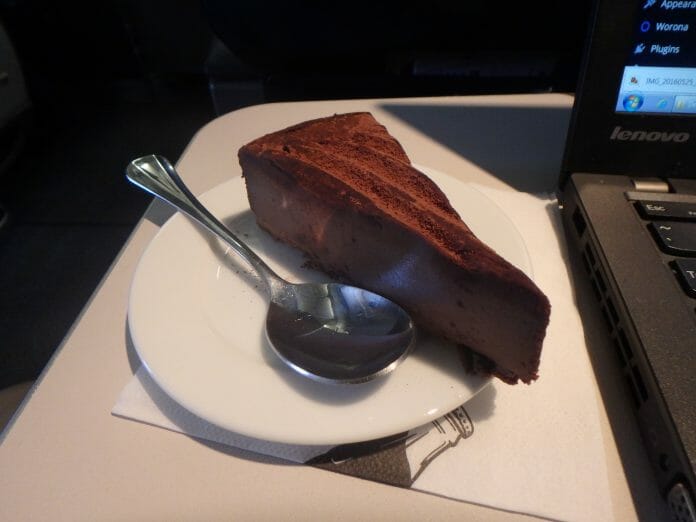 I am pleased to report that desert was much more palatable, a slice of chocolate cheesecake that would not be out of place at The Cheesecake Factory (and that is high praise, coming from me)

As was the case on the previous United flight, WiFi was available at an affordable rate. I realised I forgot to review the inflight entertainment options. United is investing heavily in streaming technology, and by downloading the United app you can access movies throughout the flight for free (even in economy).

The flight was what I’d come to expect of United. Not outstanding, not terrible. I was quite eager to see what long haul United would be like though. What happens when you give the crew a better cabin  product and more time to shine?

The flight landed on time and I now had 4 hours to kill before my flight to Sao Paulo. It was time to explore Houston airport and get a real meal…