I am quite certain that 10,000 years from now when the world is a radioactive wasteland, alien archaeologists who visit Earth to excavate its remains will be baffled by this concept our civilization called “hotel loyalty”.

Allow me to explain.

I’ve stayed here on 2 separate occasions, totaling about 30 nights. On both occasions, the power (and the all important air conditioning) would cut out randomly during the night for a few hours.  The swimming pool had a healthy layer of algae growing on top. The breakfast spread in the lounge was tiny and never changed in 30 nights. The toilet overflowed when you put anything more than 3 pieces of toilet paper into it. 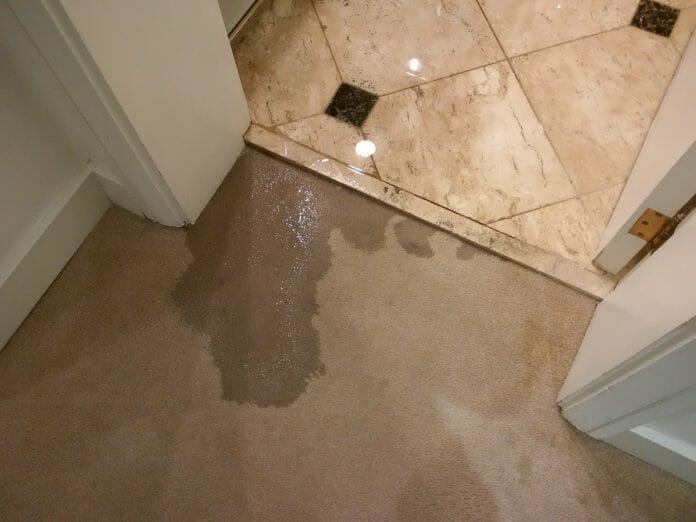 5 minutes down the road from the Sheraton Sao Paulo is the Grand Hyatt Sao Paulo. It’s bright and cheery, the restaurants are excellent and  it is for all intents and purposes a marvelous place to stay. With a corporate rate of ~US$200 it won’t burn through my budget by any means. 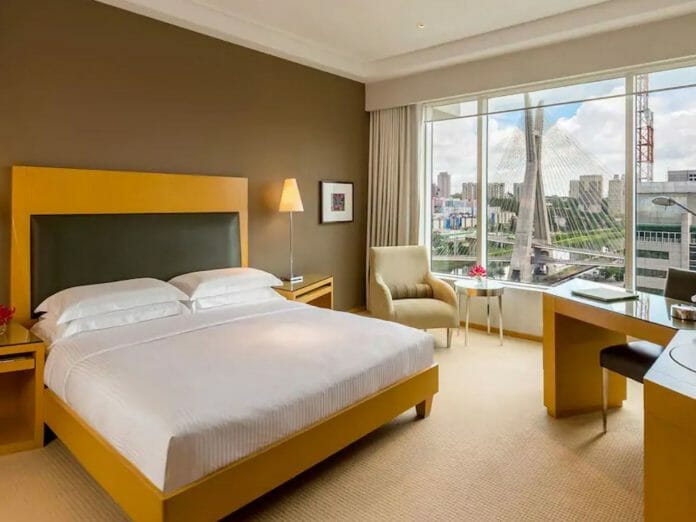 And yet I’m back again. I’m here because of the SPG Triple Up promotion where I earn 3X points at Sheratons (2X at all other Starwood) and 1,000 points for a stay including Friday or Saturday night.

At my base rate of US$173 a night for a Saturday to Wednesday stay, this means…

That’s a heck of a return for a 4 night stay.

And then there’s the other dangling carrot of lifetime status. Assuming Marriott’s takeover of Starwood doesn’t epicly mess things up (and it will), then Lifetime status with Starwood is something I’d really find valuable.

I am 1 year and 4 nights away from getting Lifetime Gold. At this point I’m quite confident I’ll get it- the 4 nights will be more than covered on this trip after which it’s a matter of getting 10 stays/25 nights in 2017 to complete the requirements.

It’s the Lifetime Platinum that I really want though- and that will require a whopping 500 nights and 10 years of Platinum status (need not be continuous). Assuming Marriott doesn’t do away with this, I still need to keep building towards that 500 night mark.

Such are the chains of loyalty, and so I find myself back at the Sheraton Sao Paulo WTC once again.

On first glance the hotel isn’t anything particularly unique. The lobby is the usual gloomy Sheraton (in fact, the entire property is part of the mixed-used WTC complex with offices and a small mall), with its dull tiled floors and office standard furniture 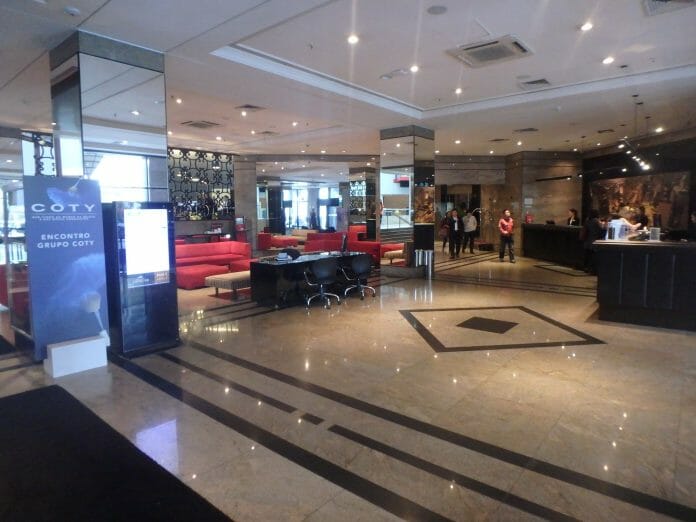 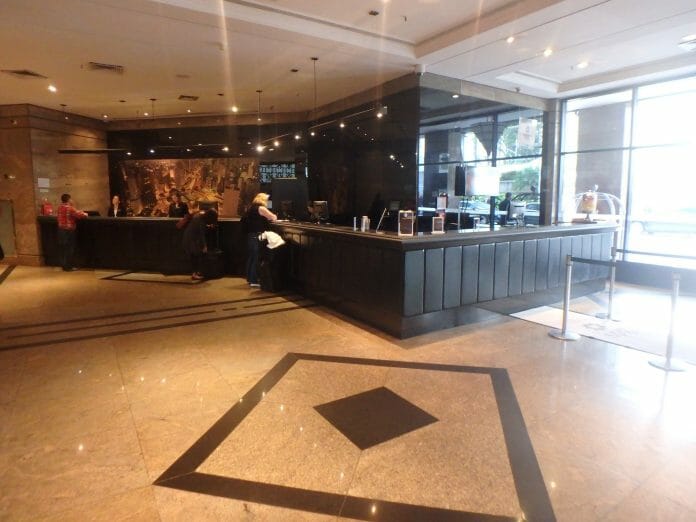 But this Sheraton tries to be special. The gimmick behind the Sheraton Sao Paulo WTC is that each of the design rooms on the 3rd, 4th and 16th floors is unique. The idea behind the hotel was to bring in well-known local architects to put their signature spin on some of the rooms.

If you believe the publicity photos, you could end up with rooms like this It’s a delightful bit of Russian roulette, really, and a welcome change from the usual predictability of Sheratons. I was assigned Suite 317. What would I find? 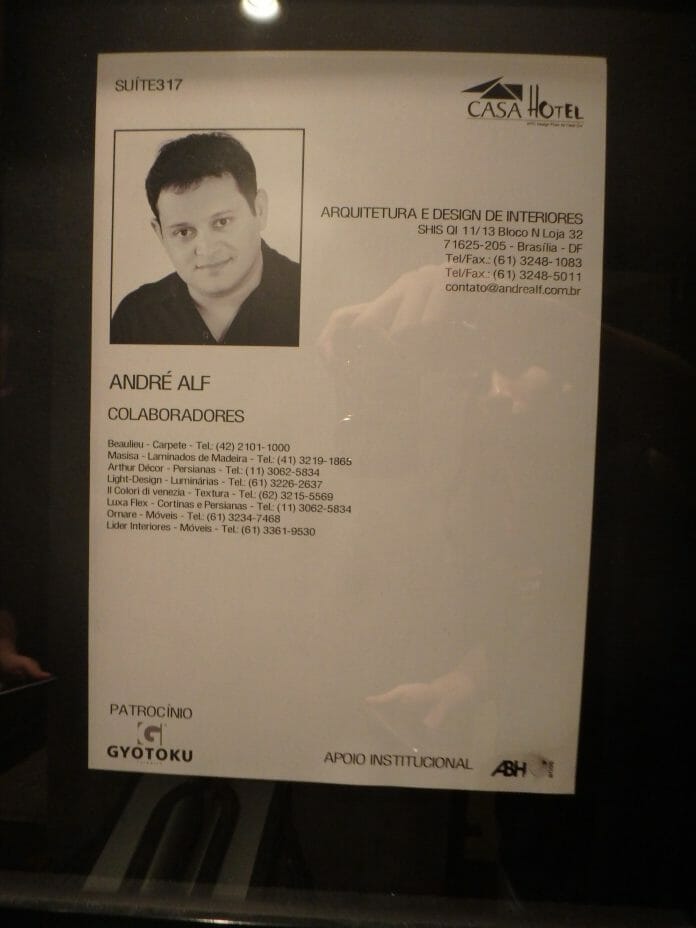 317 is the brainchild of Andre Alf. Although I have never heard of Andre Alf nor know him personally, I am convinced that he is at heart a goth kid. Because 317 is dark. Even with all the lights on and the windows open, this is the maximum brightness I could garner. After all, darkness hides the pain. 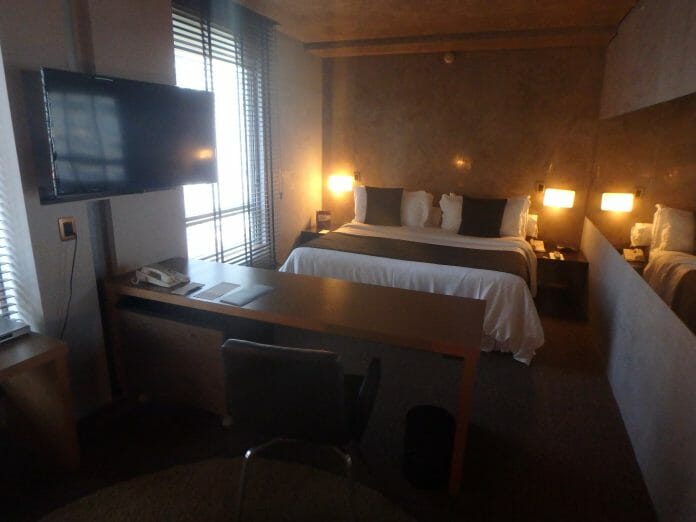 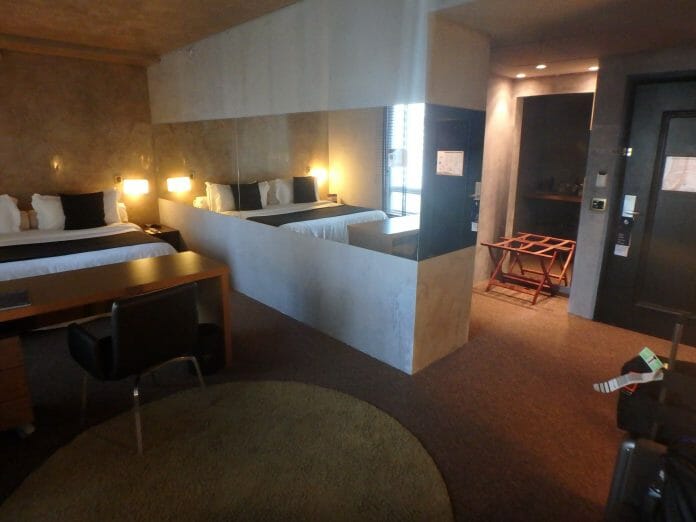 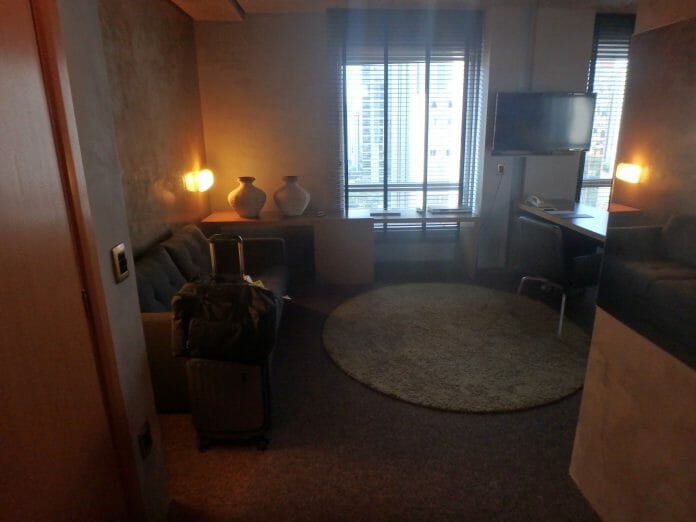 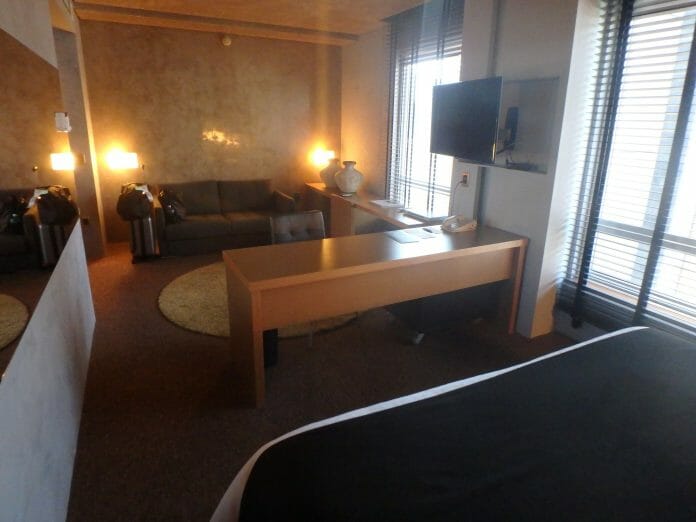 Space wise it’s fairly adequate. All the design rooms are all fairly egalitarian in terms of size (my room is the blue one here), although the bigger design suites are on the 16th floor. Although the room had been designed as per the designer’s unique vision, the bathroom was your standard gloomy Sheraton. 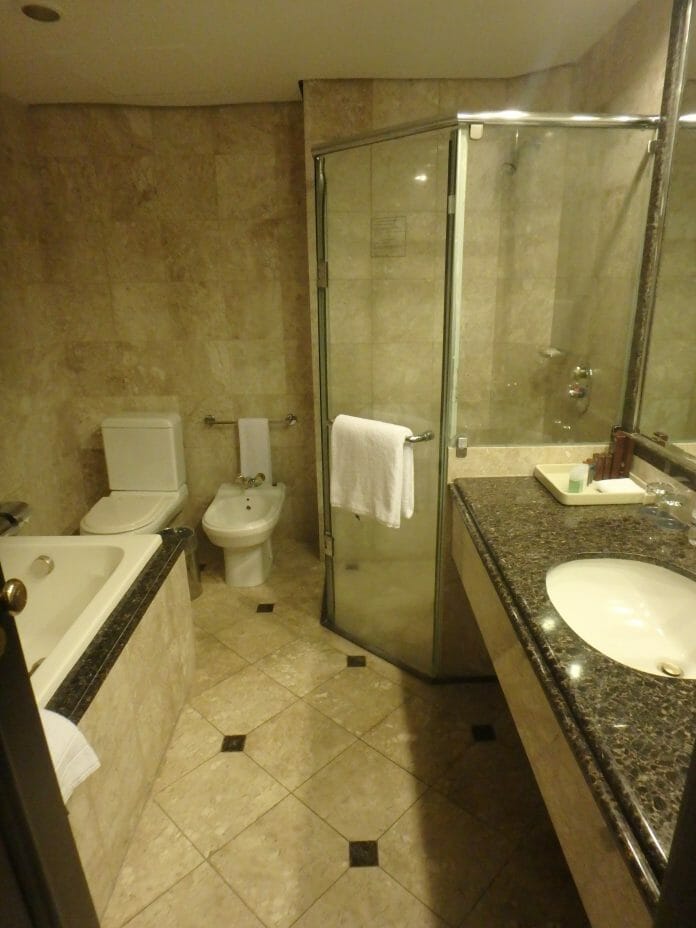 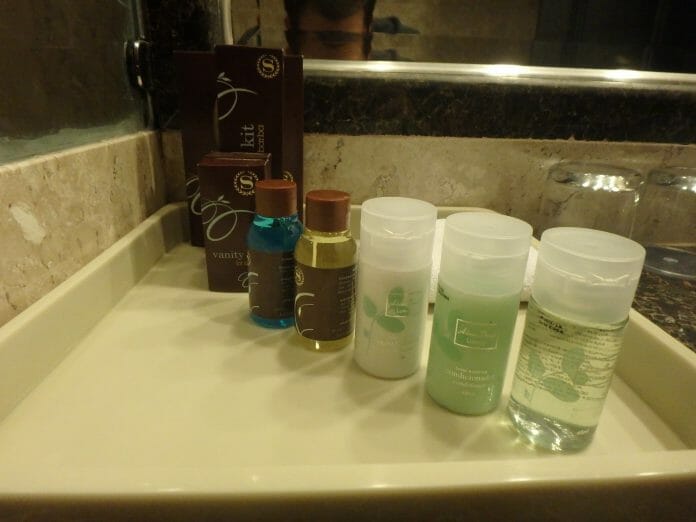 The bathtub held the potential for relaxing afternoon soaks, or catching syphilis. 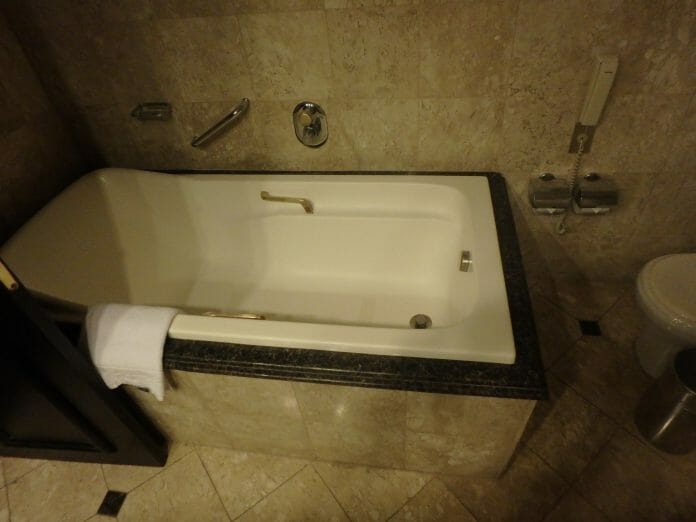 And at least counter space wasn’t at a premium. Numerous bottles of bottled water were also available. 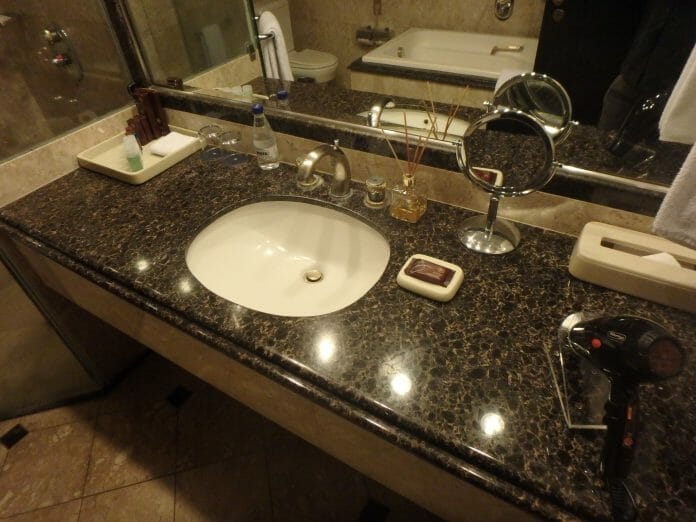 There was a well-stocked minibar (I have looked back at all my previous trip reports and concluded that I have never used any term other than “well-stocked” to describe a minibar. Some changes may be in order) 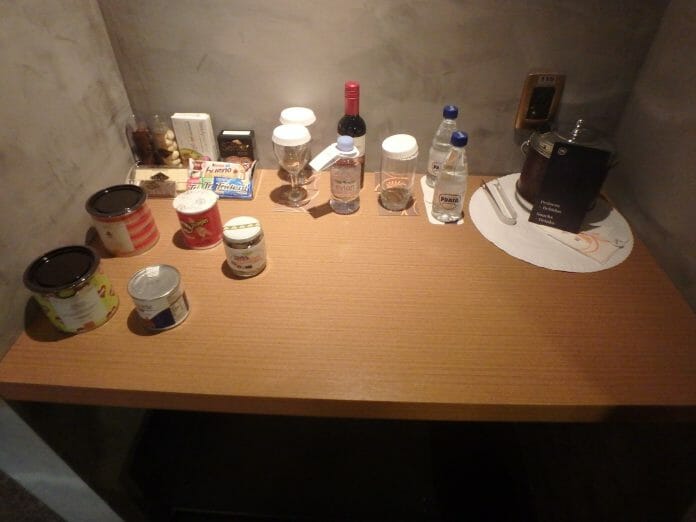 And finally, something that is inexcusable for a business hotel- no USB outlets or power plugs by the bedside table.

Away from the room and onto the breakfast. I get that breakfast isn’t a big thing in Brazil (or at least breakfast as westerners know it), but I was quite bummed out that in every single morning of the cumulative 30+ nights I’ve stayed at the Sheraton WTC the breakfast spread has been exactly the same

There is bread, pre-made waffles, bacon and cheeseballs 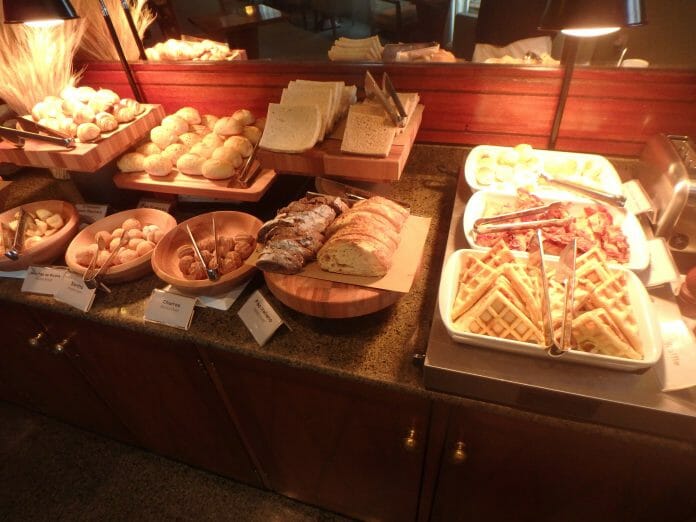 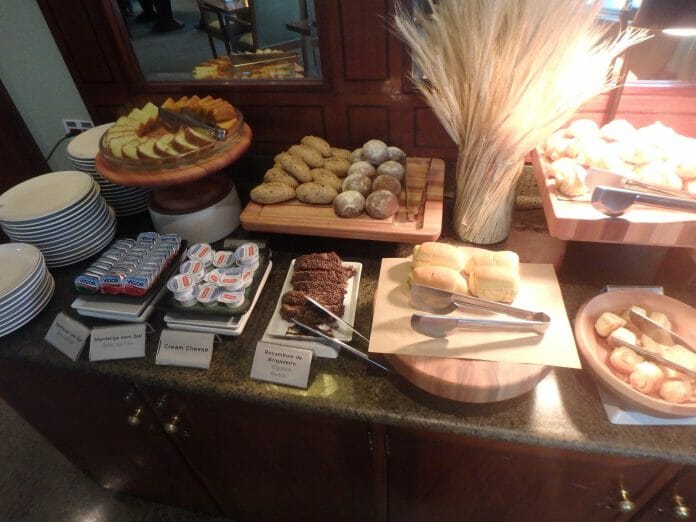 An array of cut and whole fruit 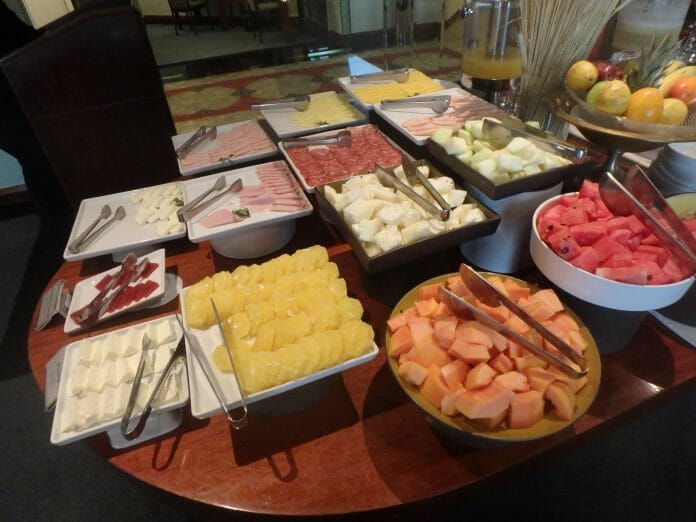 Three hot items- scrambled eggs (made with a lot of cream and cheese), some sausages with that weird metallic taste and soggy potatoes 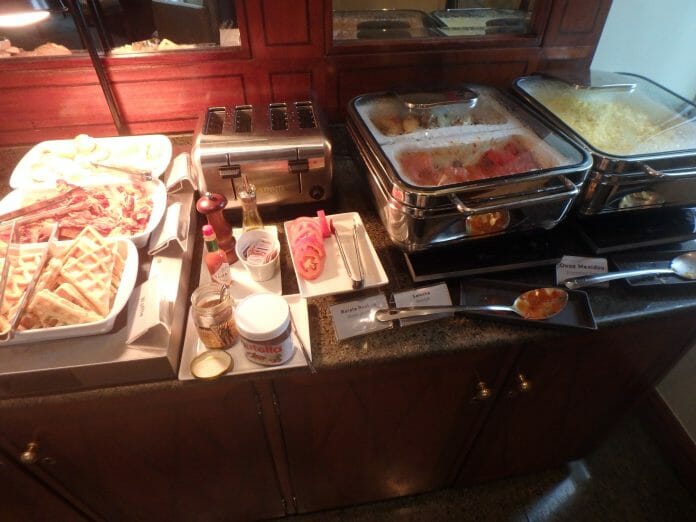 So this is the same meal I’ve had every morning, for the 30+ nights I’ve stayed here 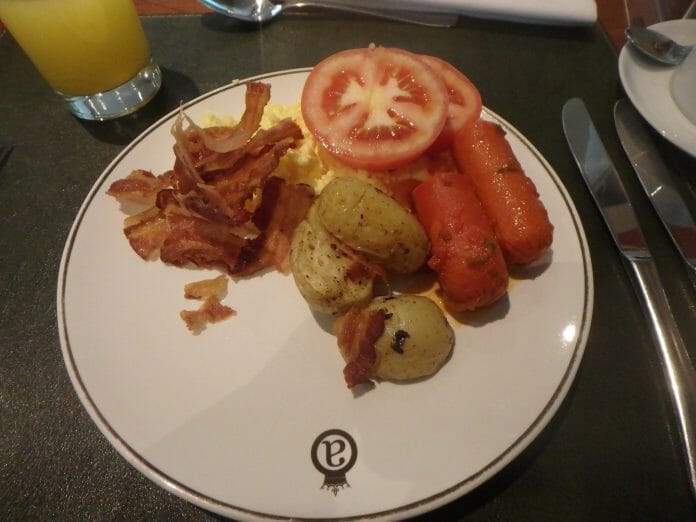 Offtopic: Maybe it’s a central/latin America thing but everyone seems to be bent on cooking the life out of eggs. Here are the eggs I got at what is supposed to be one of Mexico’s best breakfast places… 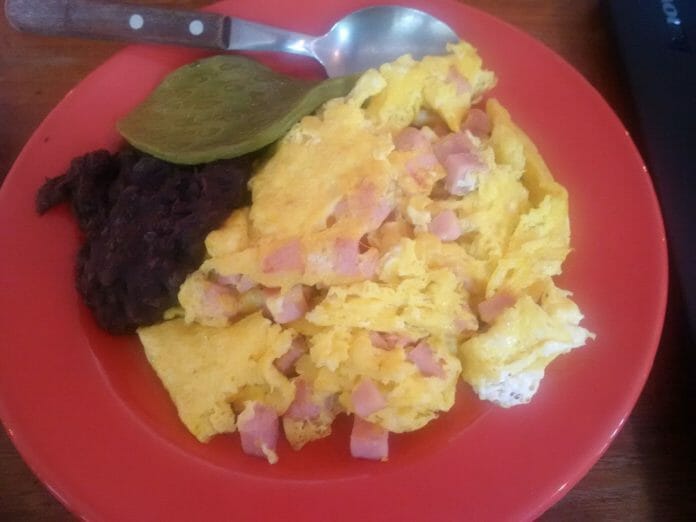 Elsewhere I was pleased to report that the pool was now completely algae free. The power cut out like clockwork on one of the nights but was otherwise alright. There are no decent dining options in the hotel or in the attached D&D mall (unless you like really suspicious looking sushi) but Eataly is only a 5-10 min Uber away. What’s Eataly, you ask? Stay tuned.

So- overall thoughts. The Sheraton WTC is a classic case study in the loyalty trap. Even though I have Hyatt Diamond status from their status match earlier this year when they were just giving it out like candy, I’ve not made a single stay at a Hyatt since then. I’m not sure what it’ll take for me to actually stay at a Hyatt (probably if I end up in a town without a Starwood property, or if I’m going to a resort destination and need a guaranteed suite), but so long as I haven’t hit the 500 night mark for Starwood, I will continue to be unquestioningly loyal to any and all Sheraton properties, no matter where they be.

“Insanity: doing the same thing over and over again and expecting different results.”
Albert Einstein

I think you will get more points under the row of tripod point bonus.

T&Cs say “Members who earn triple Starpoints will earn an additional four (4) Starpoints per eligible US$1 spent [for a total of six (6) Starpoints per dollar spent]. Elite-level extra Starpoints earnings and other bonuses will not be doubled or tripled.”

Will be staying there in November, just to check did you get local SIM for data?

yup I did. super ma fan because the standard of english there is poor. go to jk igautemi mall, near the sheraton. the claro store there has english speaking staff.

Cool! Thanks for the advice.