My hopes and dreams for the miles and points game in the upcoming year.

Merry Christmas in advance to all Milelion readers! I’m still hard at work putting together some thoughts on the year that’s been (I mean, there’s just so much to talk about), but I’ll definitely have that done before the new year.

Every year since the site started in 2015 (except 2017 where I plumb forgot), I’ve been putting together a little list of things I’d love to see happen in the miles and points game. Even though some of them are mere pipe dreams, a good number of previous year’s wishes have surprisingly come to fruition!

The highly-anticipated leisure travel bubble with Hong Kong ended up being postponed at the last minute, and in retrospect, it was the only decision that could been made. The ATB will be reviewed between Christmas and New Year to see whether a January start is feasible, but based on the current caseloads (21 Dec: 51 linked, 27 unlinked), I think it’s highly improbable.

Who does that leave? Singapore has said that it’s actively seeking additional travel bubble partners, and names like Australia, Brunei, China, Japan, New Zealand and Vietnam keep getting thrown around (Taiwan too, but it might be politically difficult to do that).

My personal preference would be Australia or New Zealand, but given how cautious both countries are even with each other, I’d temper my expectations. Japan might be an interesting one to watch, with authorities previously announcing plans to resume tourism early next year in preparation for the Olympics. That said, they’re already putting the brakes on domestic tourism, so it’s very much up in the air.

Quite frankly I’d take anywhere you’d give me right now, and most Singaporeans probably would too.

While Singapore Airlines had to can their plan for flights to nowhere, they did come up with a  fun substitute: Discover Your Singapore Airlines. This series of events allowed SIA fans to experience some of the joys of flying while remaining firmly on the ground.

I did all three- ordered a S$608 First Class meal at home, dined on board a parked A380 (in both Suites and Business), and visited SIA’s training centre. All were highly enjoyable, although the kind of thing you probably just do once.

Now I get that none of these are meant to be big money makers for Singapore Airlines. In fact, I highly suspect that the operating costs of Restaurant A380 and Inside Singapore Airlines might just have been more than what they took in ticket sales. But the PR angle is tremendous, and the goodwill it engenders in the public’s heart will go a long way should a further infusion of taxpayer funds be required.

I mean, the cabin crew got a veritable hero’s welcome when they walked through the gate area en route to Restaurant A380, one of the most wholesome moments of the day. That’s the real value of these events, and it helps Singapore Airlines reinforce their brand even when people aren’t flying.

I’d wager there are still areas worth exploring- a tour of the catering facility perhaps, or a look at airport operations like baggage handling. I’d certainly be first in line. 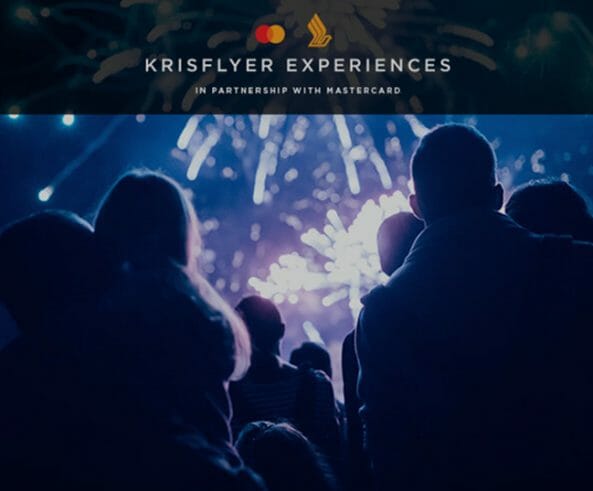 KrisFlyer Experiences holds so much promise, but it couldn’t have picked a worse time to launch. The first event ran right smack into COVID-19, and even though in-person events are once again offered, they’re necessarily small scale due to restrictions.

This is unlikely to change even in Phase 3, because we’ll be dealing with eight people at most. If all goes well, however, perhaps we’ll see a Phase 3b with expanded gatherings. There was a test concert at MBS recently, so the idea of larger KrisFlyer Experiences may not be that far off.

This hasn’t been a good year for premium credit card holders. While key benefits like lounge access and limo entitlements can’t be used, annual fees have not been adjusted accordingly. Banks are still expecting customers to shell out S$500 (or more) for the privilege of membership, which is just absurd at the moment.

American Express has been a notable exception, with its numerous initiatives for Platinum Charge members (double points, $500 statement credits, virtual Platinum af’FAIR, staycation promotion), although in my opinion they’ve really dropped the ball when it comes to dealing with expiring travel credits.

Other cards haven’t done an awful lot beyond the following:

There’s obviously no need to cancel your card prematurely (it’s not like you get a pro-rated refund of the fee), but I don’t think I’d advise anyone to renew their premium credit cards so long as travel remains at a standstill. The main reason why I renewed my AMEX Platinum Charge was because I could redeem MR points for the fee, and American Express has actually rolled out some commendable initiatives to cushion the impact of COVID-19 (although I’m still unhappy with how they’re handling travel credits, something I’ll look at more closely towards renewal time).

If there’s one thing that COVID-19 has revealed, it’s how reliant premium cards are on travel benefits. Hopefully, product managers will rethink their approach and introduce new perks that can be used during these usual times, even if they’re only temporary.

Hilton didn’t offer anything larger than a 100% bonus this year, nor did IHG. In fact, Hyatt’s most generous sale this year has been a 30% bonus, well below the 40% we saw offered in 2019 and years before. The only program that bucked the trend was Marriott, which offered its biggest-ever bonus of 60% twice in 2020.

I have to say I’m surprised. With travel on an indefinite hiatus, you’d think the hotels would need an infusion of working capital just as badly as the airlines. Maybe it’s got something to do with how hotels are run versus airlines (most hotels under a particular chain are franchisee-owned and operated, and while franchisees can’t control points sales, they have indeed been active with voucher sales), but I’d love to see Hilton or Hyatt pushing the envelope a bit. Since it’s so hard to earn hotel points in Singapore, I’d certainly be a buyer for Hyatt points with a 50% bonus, for instance.

This is one wish I’m almost certain we’ll get, though it’s less clear when exactly it’ll happen.

While the hotel industry may have seen record low occupancy rates in the first half of this year, they’re actively making up for lost time with the resumption of staycations. More than 250 hotels are now staycation-approved, and while we’ve seen some pretty good deals, not everything is hunky dory. 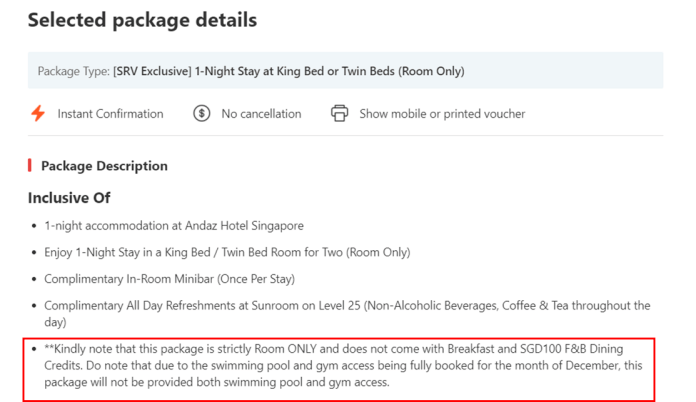 First, Andaz Singapore and their remarkable “room-only” rate, where guests are not permitted access to the pool and gym. It’s bad enough this clause is buried in the fine print, but to compound matters, the hotel is not being upfront about the reason for the restriction. They claim is that the pool and gym are fully booked for December, but as I showed here, it’s completely untrue. 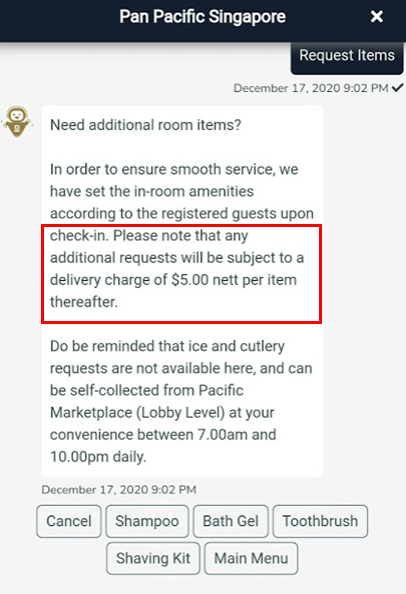 Second, Pan Pacific Singapore and their S$5 delivery charge. This was introduced shortly after I did my stay, but I noticed it when I was putting the review together. Guests must pay S$5 for every additional request for in-room amenities, be it shampoo or an extra towel (and from the reports I’m getting, S$3 per additional bottle of water). That’s just poor form for a 5-Star hotel- I get that they’re understaffed, but since when did nickel-and-diming the guests become the solution?

When reputable hotels like the Andaz and Pan Pacific resort to such shenanigans, it leaves a bad taste in the mouths of guests. It also reflects an alarming short-termism in thinking, insofar as disgruntled guests are hardly likely to become repeat customers.

These two aside, it’s clear from the recent chaos at Grand Park Orchard that some hotels are overextending themselves in an attempt to grab the December dollar. When you simply try to sell every room you can with no regard to manpower or infrastructure constraints, you’re shortchanging your guests and throwing your staff under the bus.

I find it hard to believe that scenarios like this are unforeseeable. The staycation market is a very different beast, with guests typically arriving early and checking out late (compared to overseas travelers who arrive and leave at all hours of the day)- that’s not a new discovery. Hotels must surely have known that this might happen, but still decided to book themselves full nonetheless in the hope that guests will grin and bear it. Again, it’s short term thinking, and taking their patronage for granted.

On a more positive note, I’m glad we’re seeing other hotels get creative with staycation packages. PARKROYAL on Beach Road, PARKROYAL COLLECTION Pickering and Pan Pacific are now offering a “100% dining credits” promotion, where guests get 100% of their room rate (even taxes and surcharges) back as dining credit. While it’s unlikely this will become widespread the way it is in Hong Kong, it’s definitely a welcome development.

Singapore Airlines has extended the validity of KrisFlyer miles several times this year, with the latest extension lasting till at least April 2021. However, so long as COVID-19 remains unresolved, it’ll always be a case of kicking the can down the road.

That’s because KrisFlyer’s expiry policy is a hard three years (except for PPS Club members, whose miles do not expire). Why should this be, when so many airlines (including long-time rival Cathay Pacific) have switched to an activity-based expiry system?

As I argued in this article, activity-based expiry policies avoid penalising your cobrand cardholders (three-year expiry countdown automatically starts when miles are credited right now), make saving up for aspirational awards easier (no hard expiry), are relatively less confusing for consumers (you don’t have different miles with different ages), and encourage more frequent touchpoints with the program (every transaction helps extend the life of all miles). It just makes so much sense.

Go on KrisFlyer, do it.

How did previous year’s wishlists go?

So those are the things I’m hoping to find in my stocking come 2021. It’s been a tough year for miles chasers, but frankly, there’s a whole lot to be thankful for too!

What are you hoping to see in the miles and points game next year?

Merry Christmas from The MileLion

Course sizes are not limited to 8, if I’m not wrong, but subject to safe management measures, like masks and distancing. Dining is, only because you de-mask.

Amex Platinum Reserve Credit Card. “Watch this space in 2021”. Something brewing? Can give some hints?

I don’t know anything specific, but my understanding is the product is due a refresh after the platinum credit card got its update this year. 2021 seems to be a logical timeline

A finite expiry period for miles provides a lot more certainty on the financial liability amount of miles. That’s probably a primary reason why they’ve kept it for so long. But agree, if the intention is to maintain engagement with your customers, then an activity based expiry should do well.