How do you know if someone went to Harvard?

As I headed off the jetbridge into the terminal I wondered if transiting for 4 hours in Addis Ababa made me exotic enough to get into HBS. I was pretty sure I could spin a story around this, like how I went in with much apprehension, but “challenged myself to get out of my comfort zone” and “through a process of self-discovery” managed to “rewire my preconceived notions” and “push my boundaries” thereby “making me more sure than ever before that what I want to do is get into HBS, be as anonymous as possible, get my MBA and from then on be that guy who always weaves in “when I was at Harvard” into every conversation.” I figured the admissions committee would eat that sort of thing up. I was also pleased to note that visiting Ethiopia on a brief stopover made me as equally qualified as Bono to comment on the continent’s woes.

First observation. The Chinese influence is strong in ADD. Like, very, very strong. I mean, I know the Chinese government is pouring truckloads of money into Africa to pre-empt the West, but I was still amazed to see how many Chinese restaurants and duty free concessions there were. Africanized Chinese food (let’s not go there) was abundant, and all the duty free stores sold Chinese liquor and abundant cigarettes. The terminal was also full of Chinese travelers, and I was delighted to know that the usual Chinese voice protocol (especially regard to the use of inside voice) was firmly in effect.

Second observation. The lounge setup in Addis may be confusing because there are not one, not two but three lounges available for passengers.

The first is the ShebaMiles Silver lounge. This is Ethiopian’s lounge for its own mid-tier frequent flyer card guests (Silver being one step above regular). It’s somewhat similar in concept to The Club lounge run by EVA in Taipei. Remember that Star Alliance Silver doesn’t normally get lounge access, but airlines are perfectly at liberty to construct their own facilities for their own mid-tier members as they see fit. Even if the lounge isn’t anything to shout about, it’s still a nice touch by the airline. I could never imagine SQ doing something similar for its Elite Silver members. It did build a “special lounge” for Elite Gold members in Singapore, but that was to keep them out of the much-superior SilverKris lounge.

The second is the Cloud 9 lounge. This lounge is for Business Class passengers flying on ET (It’s called Cloud Nine Lounge 2 because this is the lounge in T2. There’s another Cloud Nine Lounge in T1) and selected other airlines (Air China, Lufthansa, Turkish). As Cloud 9 passengers, were directed here. But the lounge was absolutely packed to the brim. There was barely any place to stand, much less sit. So we turned around and headed to the Star Gold lounge instead.

This is the third lounge that ET has in T2, and despite the fact it’s open to more customers, it wasn’t nearly as crowded. Don’t get me wrong, it was still pretty full, but at least we were able to get seats. The lounge is functional and nothing else. There are no showers (at least, not any that you’d want to use), the seating is basic and the only distraction is the buffet. It was evening time ,and the lounge was full of people transiting to other places in Africa. Outlets were scarce and the Wi-Fi was unusable. There were just way too many people logged in. Singtel doesn’t have a DataRoam Saver plan for Ethiopia either, so my colleague and I were forced to interact instead of staring at our phones. It was horrible. The buffet provided a nice escape from social intercourse. There was a mixture of Western and African offerings, most of which I never bothered to try (HBS essay: I immersed myself in the local culture, sampling the rich tapestry of flavors that the land had to offer. And in doing so, I discovered that sometimes the best management style is to just go with your gut.) It’s safe to say the buffet wasn’t the land of plenty. 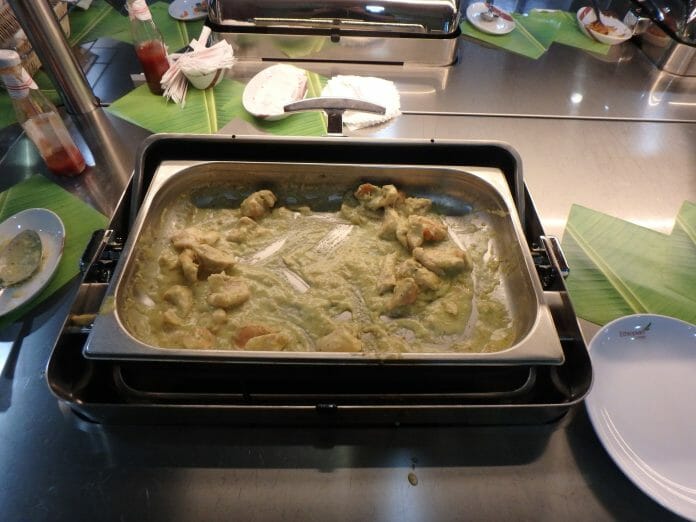 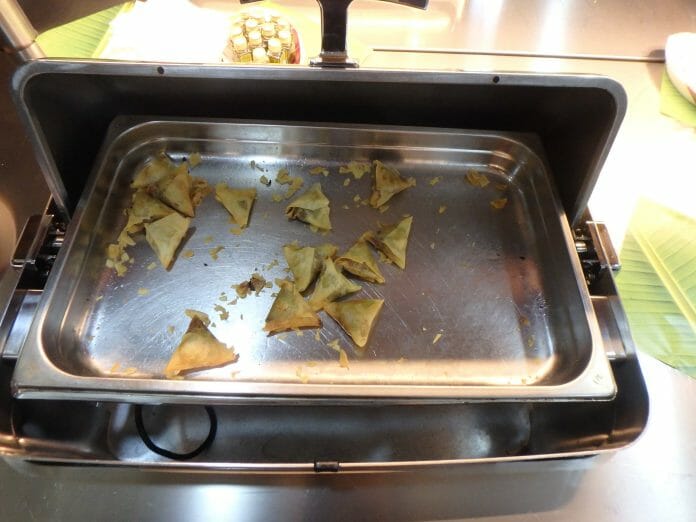 The drink selection was extremely limited too. There were only a few types of alcohol, all warm. If you wanted soft drinks or beer, there was a fridge with a few more choices. All the soft drinks were 1.5 litre self-pour bottles. That’s less wasteful than individual cans, yet feels cheap somehow (HBS essay: It was during my time here that I learned about the importance of conservation and being a responsible global citizen. I realised how many of the modern conveniences we take for granted were harming our beautiful Gaia) Behold my gastronomic bounty. African spaghetti bolognaise, a samosa, a crumb of fish and something I really hope was beef. Oh. There was a desert fridge, but the selection was forgettable so I forgot. The noise level in the lounge was well above average. It’s kind of telling that this is listed as a benefit on the website

Passengers here do not need to worry when to board their flights as Customer Service Agents will personally come to announce the departure time for each flight.

I am absolutely confused how anyone could see this as a benefit, especially when more and more lounges are moving towards “quiet lounge” approaches. What this means is that every 15 minutes you have someone wading through the lounge shouting loudly the next set of flights to board. I mean the noise level is already so loud that a shut-eye is impossible, but do you really need to make it even louder?

After a few hours of sitting around and watching downloaded Netflix videos on my phone (HBS essay: I eagerly participated in the local festivities and traditions, in doing so learning much about a foreign culture. And the more I participated, the less foreign it became), my colleague and I decided to try the Cloud 9 lounge again. The lounge had emptied out quite a bit by now, and there was plenty of seating. The Wi-Fi speeds, however, had still not recovered. The food was similar to that offered in the Star Gold lounge (economies of scale, yo). However, the Cloud 9 lounge had a proper bar. Nothing of the sparkling variety was on offer, but a lot more alcohol than the Star Gold lounge. There was also a corner where they do a traditional Ethiopian coffee ceremony. (HBS essay: It was during a local tea (sounds more Eastern mythic than coffee)  ceremony with the elder tribesman that I received some invaluable career advice, something that I had never read in any management guru book- “get into HBS, be as anonymous as possible, get your MBA and from then on be that guy who always weaves in “when I was at Harvard” into every conversation”) There was also a room with some massage chairs at the rear which was still packed with snoring passengers.

Finally, a staff member wandered through the lounge announcing the boarding of our flight and it was blissfully tie to be on our way.

I think Ethiopian has a very solid product in the air, but its ground services leave a lot to be desired. I wonder how much of this is a function of the space they have at ADD- the terminal is apparently in the midst of some expansion (interestingly enough, a VIP terminal is under construction too)  And there’s some Singaporean involvement in all this-

The new terminal is designed by a renowned Singapore architectural firm CGP while the Chinese construction firm, CCCC, is the contractor. ADPI, a French company, is the consultant of the project.

So, if you’re passing through ADD, do yourself a favor and schedule a shorter connection. The lounge experience here could be just as stressful as a short connection (HBS essay: I believe that my four hour connection in Addis Ababa was truly a life-changing, enriching experience that has given me new insights into the emerging African market. It is my hope that after I get my MBA I will one day return here to visit the noble folk I met, and to remind them all that I went to Harvard.)

It’s a Friday nite so I’m delirious and I dunno what you’re talking about.

i’m just phoning it in now and awaiting milelion ipo.

There is a typo in your third last paragraph. No HBS for you.

Ordinary first class hons here from NUS law with a few academic prizes. I think your profile is probably superior…

last i recall hbs was ~12%? Not as selective as GSB at ~5-7% but more selective than a wharton at 20%.
anyway that’s all ancient history for me, decided not to go down that route. Two years of interviews, waitlisting then disappointment have taken a toll on my soul.

You should just try again next cycle. PhD admissions for top 5 econ or CS programs are like 2-5% (i myself failed to get into all of them). 12% is pretty ok and it is likely you will make it the following year