The Royal Air Maroc flagship lounge in Casablanca is dark, dismal and dirty.

After a couple of days in Morocco I had to head over to Ghana. This would be my first time in West Africa, and I had little idea what to expect. I’d be flying from Casablanca to Accra, but would only be in Accra for a night before heading out to Tamale, an even smaller city in Ghana, for a site visit. I knew the sum total of zero about Ghana, save for the fact that IE Singapore has an office there. I briefly considered reaching out to the point person there to set up coffee, but the thought of meeting new people was scary and intimidating so decided otherwise.

The most straightforward route to Accra from Casablanca was to fly direct with Royal Air Maroc (RAM). It was my first time flying with them and let me just say- wow, these guys don’t know the first thing about keeping a schedule.

I flew a total of 3 flights with them during my RTW trip (2 domestic and this international one that I’m now writing about) and I got a constant barrage of emails about schedule changes.

First, my 8pm flight from Casablanca to Agadir was cancelled for “operational reasons” and I was given a seat on a 10.40pm flight instead (they send all these alerts in French with no English version, so good luck if you’re not paying attention. I google translated the excerpt below)

Second, I got a notification that my 12.50am flight from Casablanca to Accra (which was scheduled to arrive at 4.20am) was now departing at 10.45pm the day before and arriving at 4.40am.

(Notice how in the email below their automated message system even managed to get the dates wrong. A flight departing 06/07/2017 replaced by one departing 07/06/2017?)

I thought this was strange. Why was I leaving earlier and arriving later? I puzzled over this long and hard, then checked FlightRadar24 and realised that they had added a stop. In LFW.

Now, hands up who among you can tell me which airport is LFW without googling it. Because I can’t. LFW is Lome, Togo. That’s right, RAM had converted my direct flight into a 1 stop without so much as asking me.

I can’t help but feel this is a bit of a bait and switch, in the sense that I was willing to pay more to fly RAM so that I could do a direct flight. If they’d sold the flight as a one stop, I’d have booked my flights very differently. But good luck getting compensation out of RAM or even trying to explain the situation to their customer service. I just wrote it off as a cost of doing business with a less reputable airline.

Casablanca Terminal 2 was deserted when I arrived at about 10pm. That was strange, given that my flight departed at about 1am and the evening tends to be peak departure time for long haul flights. 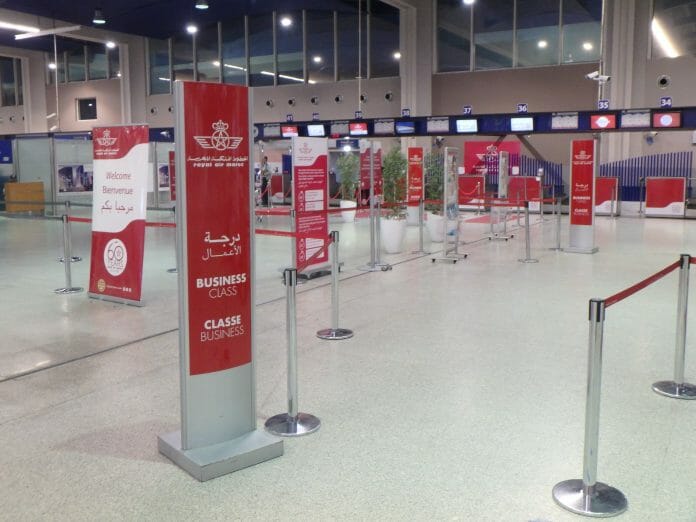 It meant a no-fuss check in for my flight, and my bags were tagged through to Accra. We had the usual “do you need a visa” questions where the staff struggled to find Singapore’s visa requirements on their computer. They seemed to find it hard to believe that I didn’t need a visa for Ghana, but that’s the badass Singapore passport for you. 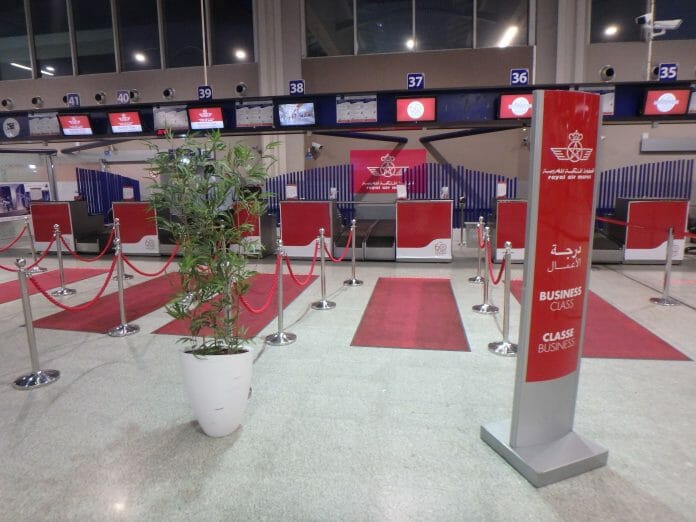 There’s priority immigration available for business class passengers, but even the regular immigration channels had no queues. Within 5 minutes (and a security screener who was more interested in watching a movie on his phone than looking at bags) I was in the duty free area where there was no shortage of argan-based products, cheap keychains and tourist trappy tchotchkes. Protip: you know a country has crappy currency when its own stores don’t want to take it. Most of the items at Morocco duty free need to be paid for in Euros, only a small selection of items can be paid for in the local currency.

I had no interest in such knickknacks, but had an interest in seeing RAM’s flagship lounge, which was down a flight of stairs from the main terminal. 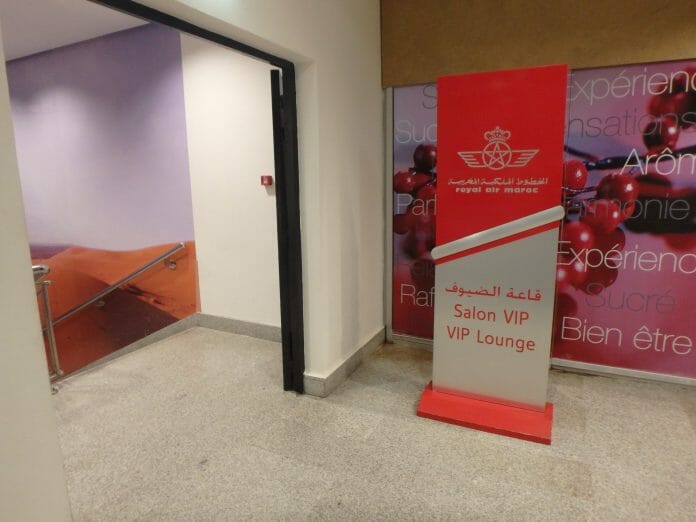 The lounge is owned and operated by RAM but is also open to a host of other airlines. That’s never a good sign, usually, as it means massive overcrowding. 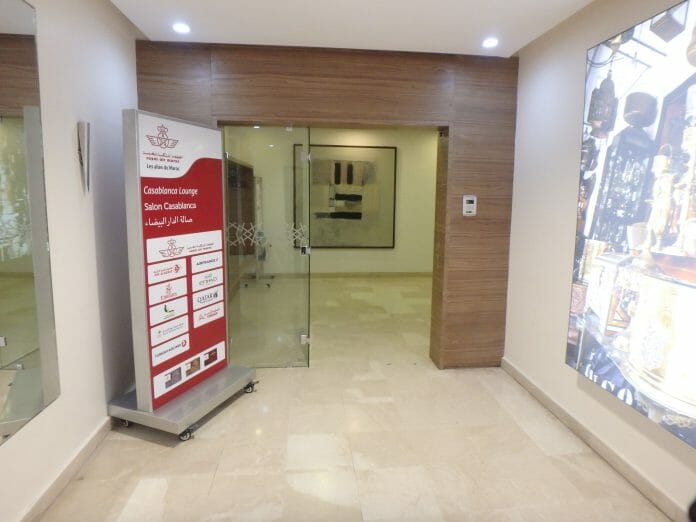 I was greeted at the desk by a cheerful associate who handed me the Wi-Fi code and told me there were no boarding announcements. 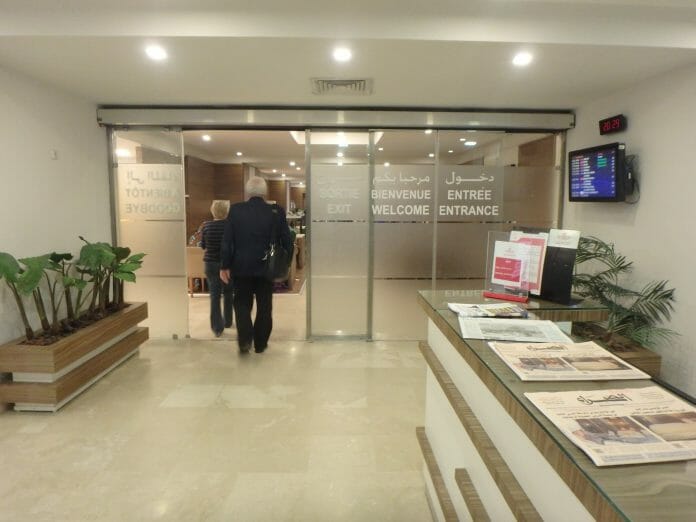 As I feared, the lounge was packed to the brim when I arrived and had a noise level to match. It emptied out a bit as the night went on, which allowed me to take some of the photos below.

I’m just going to give you the TL;DR spoiler version: the lounge is a dump. It’s miserable, there’s nothing of interest, and the F&B selection is awful. This would barely pass for a contract lounge, much less the flagship lounge for an airline.

The lighting is harsh and fluorescent, the chairs are old and worn, and there are no showers available (but given the state of the toilet, that might actually not be a bad thing). The lounge has basically two areas- to sit and to dine. 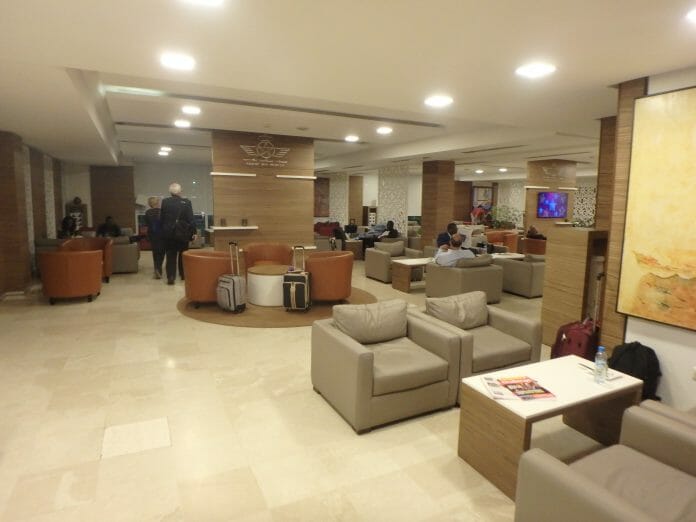 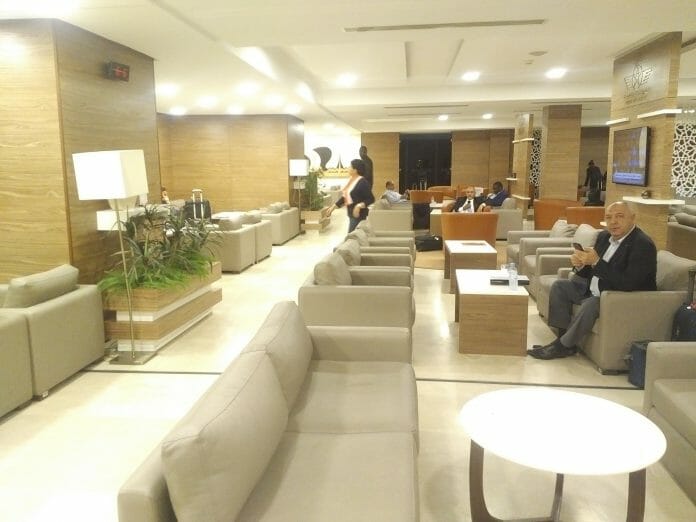 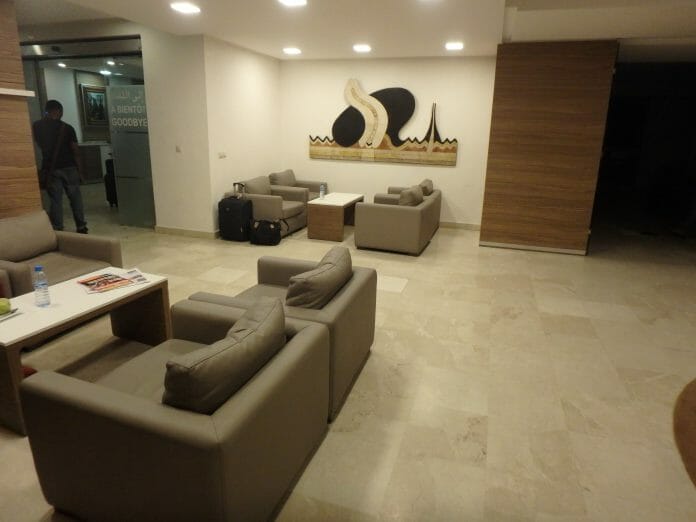 The dining area has a mix of high tables and communal ones. 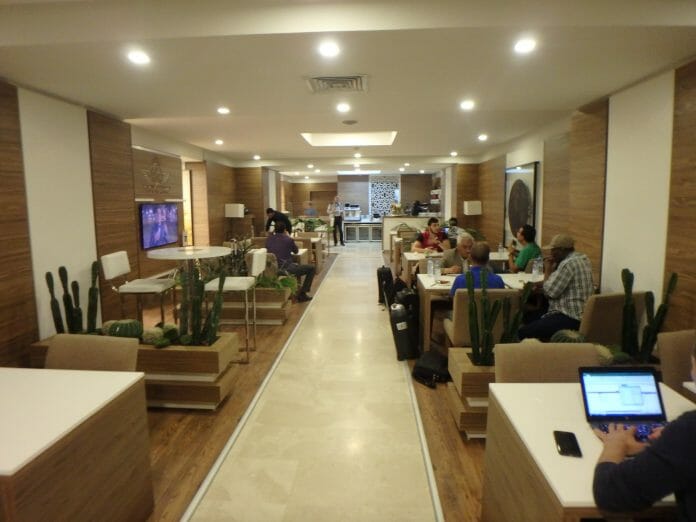 I took these photos after the place cleared out a bit- prior to which there was barely any place to stand. 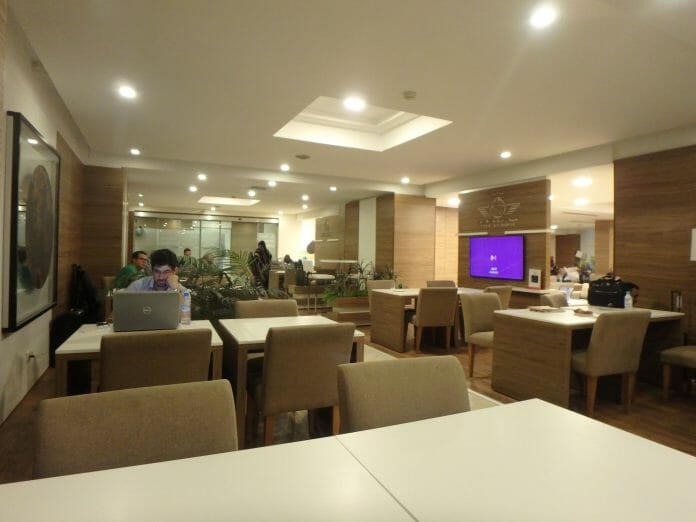 There’s a buffet selection, but no hot food to speak of. That’s right, the sum total of the dining experience is a bunch of pastries, microwaved mini-pizzas and sandwiches. It was miserable. 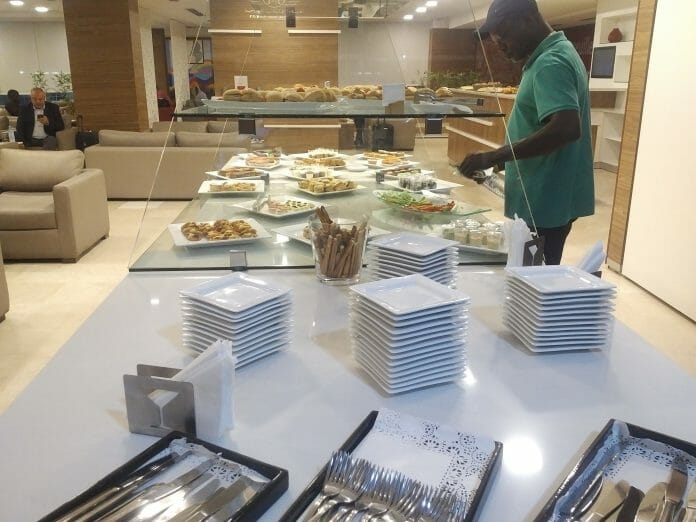 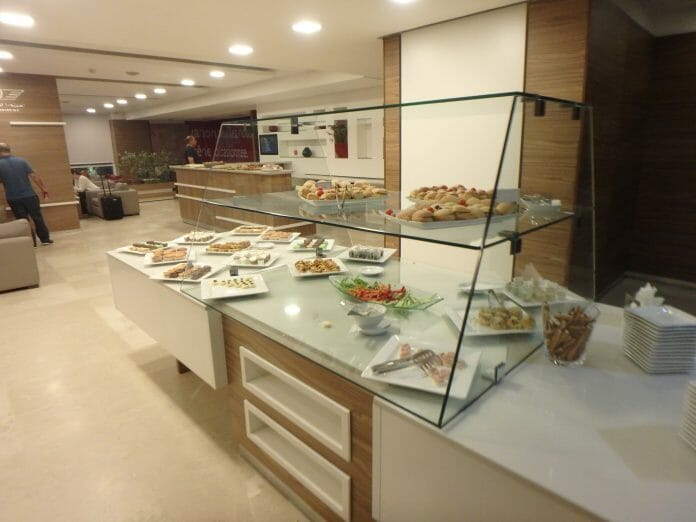 I’m not quite sure what to write about it. There seemed to be a kitchen attached to the lounge and a good sized catering crew, but they spent most of the time chatting among themselves and occasionally bringing out another cold tray of mediocrity. 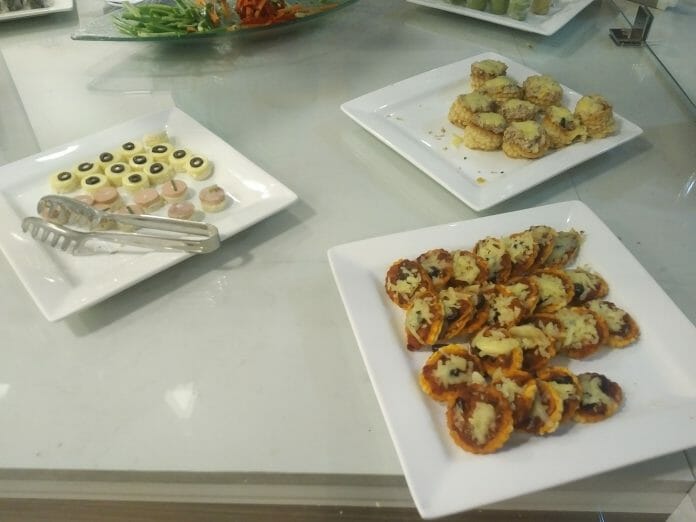 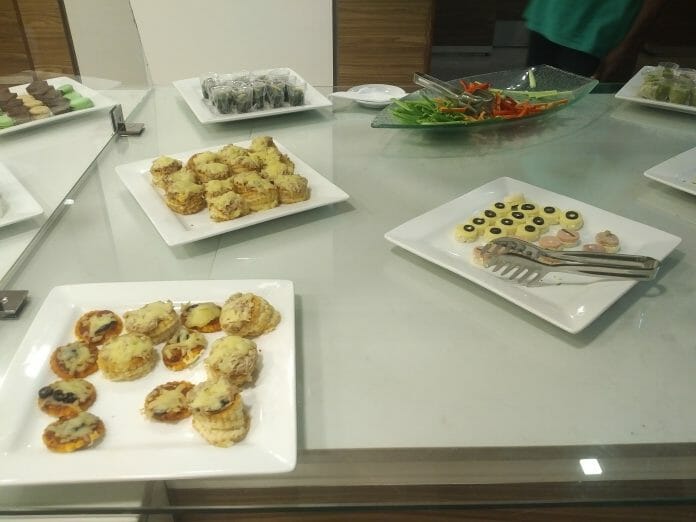 Woo hoo they had mass made cheap deserts. 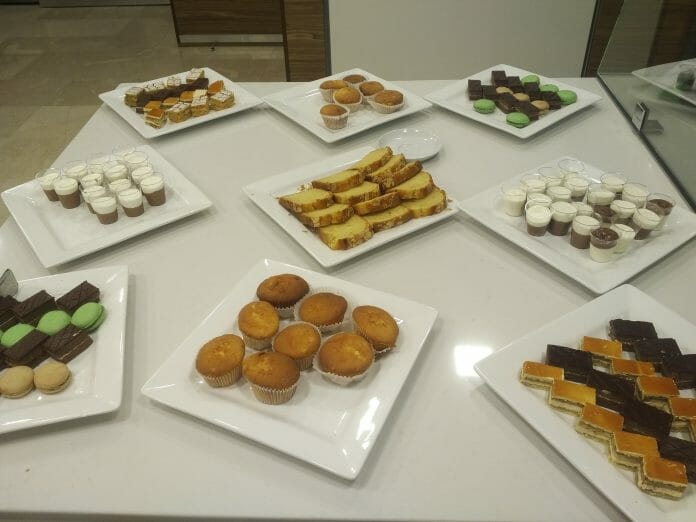 There’s a separate area which I swear was supposed to be the bar, only it had no drinks or bottles (perhaps on account of Ramadan?). Instead there was some local breads and, yup, more pastries. That’s some Arabic French fusion right there. 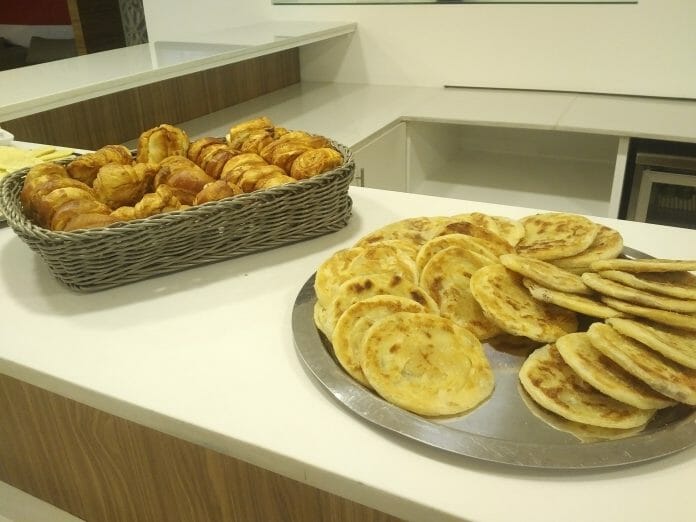 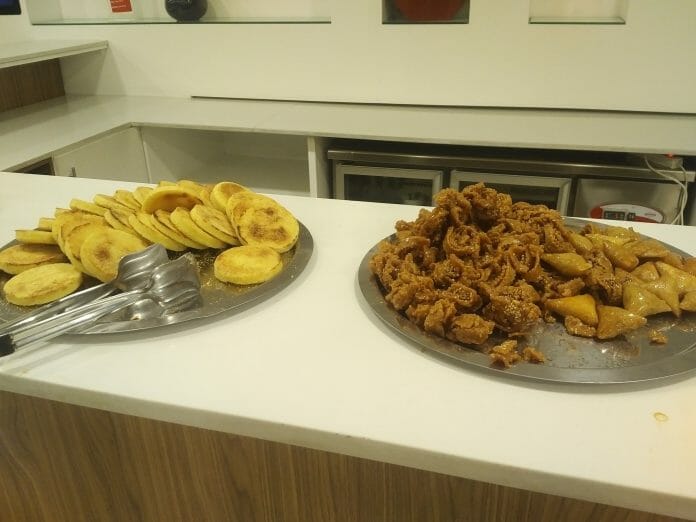 There was precious little else to do in the lounge. Even the Wi-Fi was so slow that I ended up tethering to my phone.  There were only soft drinks and water available,  and the whole lounge was dry. There’s a slightly more substantial review over on OMAAT (apparently there’s a very limited selection of hot food during traditional mealtime windows), but this is definitely not a place you want to spend any extended amount of time.

I know that no self-respecting airline geek would ever use $kytrax (see what I did there?) ratings as a benchmark, but it still amazes me how they can consider RAM to be a 4 star airline. The customer reviews certainly don’t reflect that in any case.

More amusingly when you look at the lounge reviews you get an overall score of 2/10 (only 2 ratings, but still)

So- RAM’s lounge in Casablanca is bad. Really bad. Hopefully you’ll never have to experience it. The inflight experience, however was better than expected. Perhaps the purpose of the lounge is to temper expectations before boarding!