A review of the Aloft Boston Seaport- how do the rooms, service and food measure up?

It’s rumoured that SQ will be adding a new US destination once the ultra long range versions of the A350 come online, and I’m hoping that destination turns out to be Boston.

Boston, you see, is an amazing city steeped in US colonial history. Walking the Freedom Trail and learning about the people and places involved in the road to US independence helps you understand a bit better concepts like American Exceptionalism and Manifest Destiny. I mean, I still don’t agree with them, but I can better understand where they’re coming from. And to think- my only previous experience with the Freedom Trail was playing Fallout 4. But Boston is also an important business city, and there must have been some event in town because all the Starwood hotels were crazy expensive for the dates we were looking at. The cheapest rate available was US$292 (pre-tax) at the Aloft Boston Seaport. 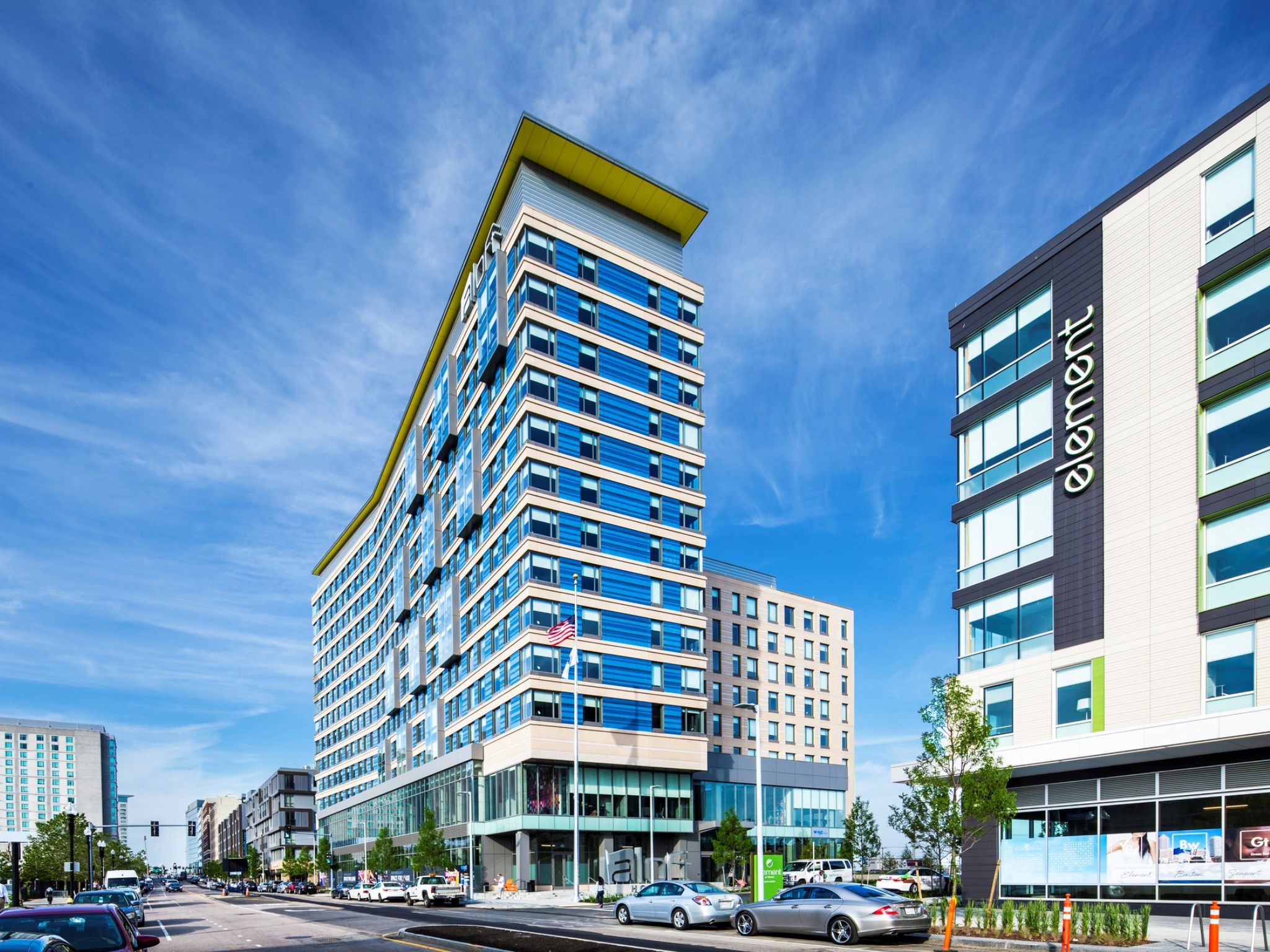 The Seaport location isn’t exactly the best for Boston, but Ubers are fairly affordable and it does at least put you within reach of a lot of decent seafood restaurants. I ate at Legal Seafoods. I know, it’s a chain, but it was good enough for me. 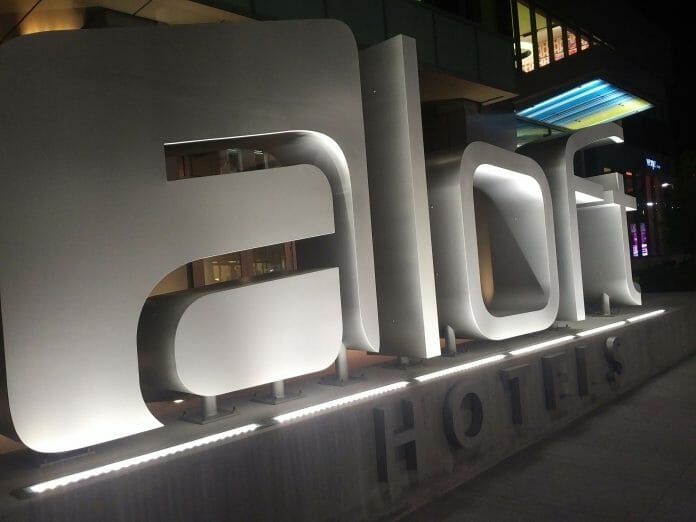 Those of you who’ve stayed at Aloft hotels will know the vibe- it’s basically trying to be a baby W. In fact I think that was the official branding once upon a time.

The lobby is a good introduction to what Aloft is trying to achieve here. Loud music (in the evenings), mood lighting, quirky design. Some people go for that sort of thing, but for me it’s kind of like the 40 year old uncle desperately trying to insist he’s still hip and with it. 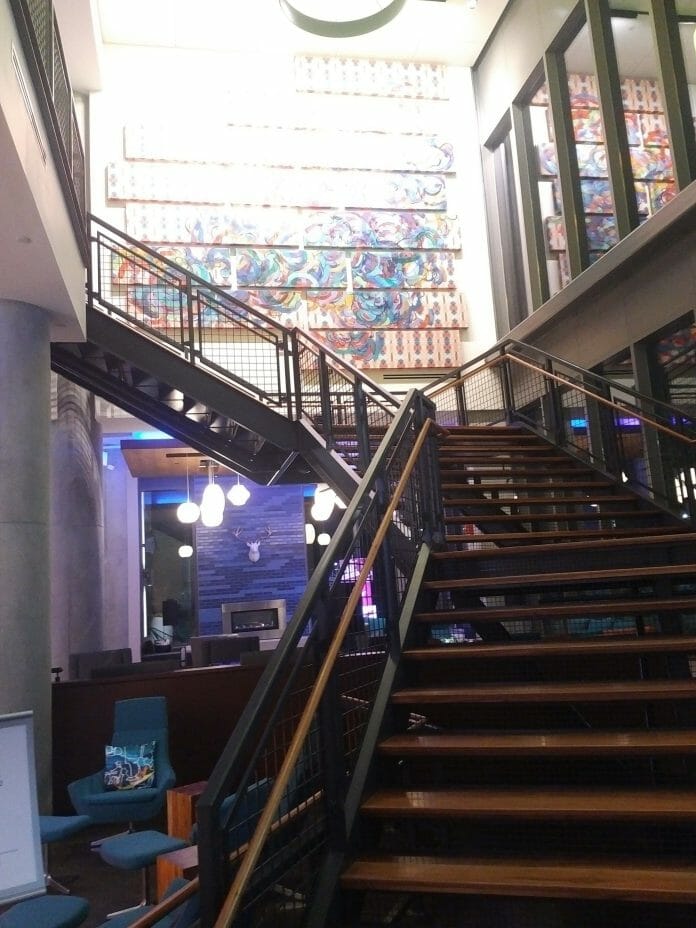 Because night shots are so bad, here’s a day shot. 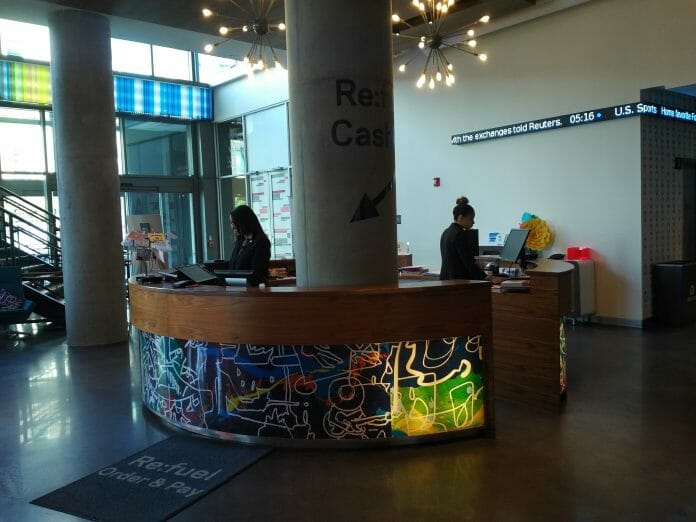 The property itself is fairly new, having opened in Feb 2016.  They put a time capsule in the lobby, presumably so people 100 years from now can marvel at how society ever progressed when every individual had only an autographed baseball, branded Rubik’s cube and letter from the Aloft management to amuse themselves. 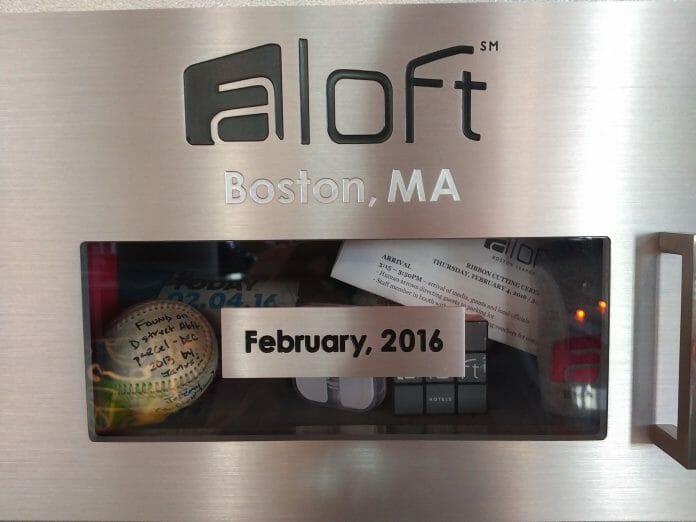 At check-in were were offered either a welcome gift of 250 points or a $15 credit at the in-house re:fuel store. I chose the 250 points (the property participates in MAGC so you can chalk up additional points each night), a decision I did not regret once I saw the breakfast offerings (more on that later).

No upgrades, but as I’ve said repeatedly I’ve come to not expect them when staying in US properties. You get the room you pay for, perhaps an “upgrade” to a club room where the property has a club, nothing more.

The Aloft prides itself on technology, and this one had both SPG Keyless entry (that didn’t work on my phone, no matter how many times we tried) and smart lifts. 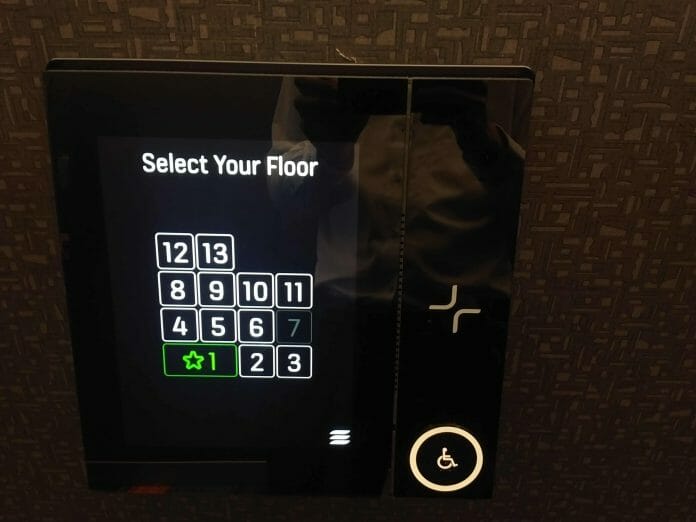 I had a standard king room, nothing fancy. The rooms themselves aren’t particularly large, but they’re the standard aloft room design. Think occasional splashes of color, 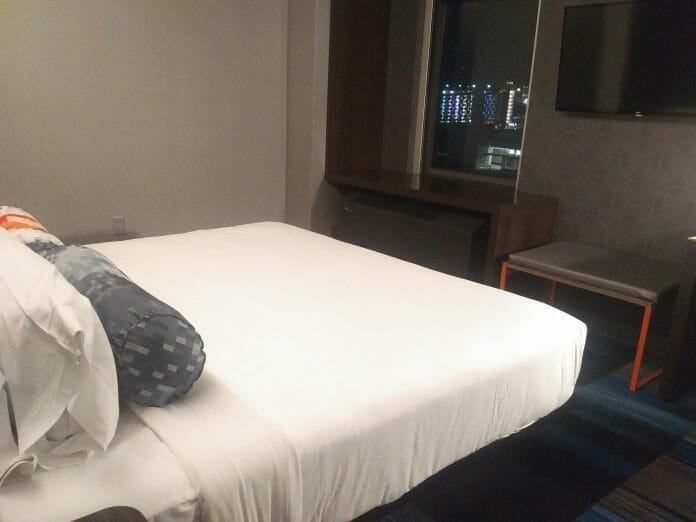 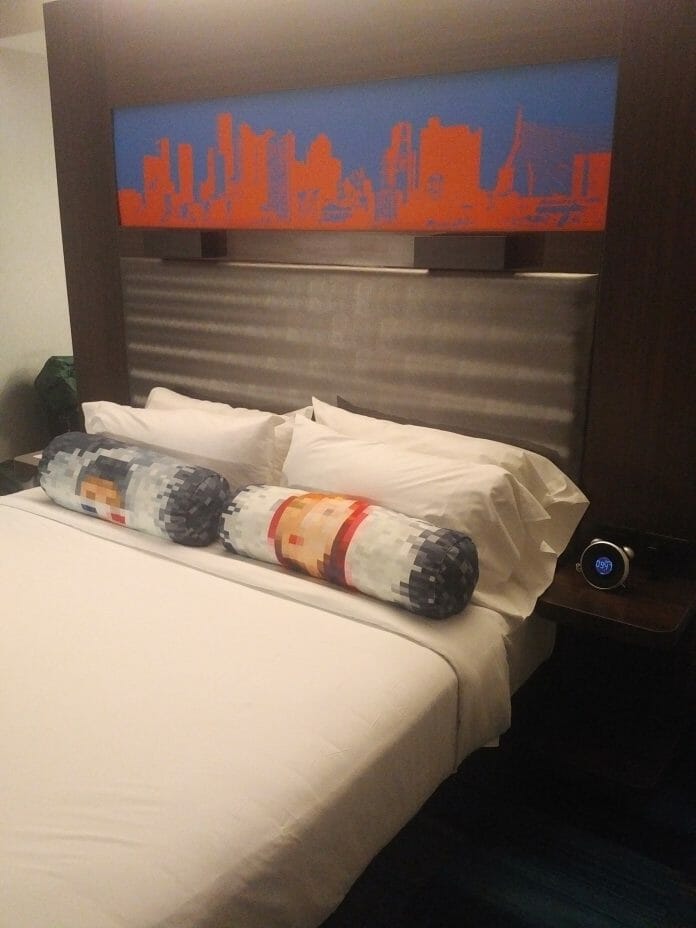 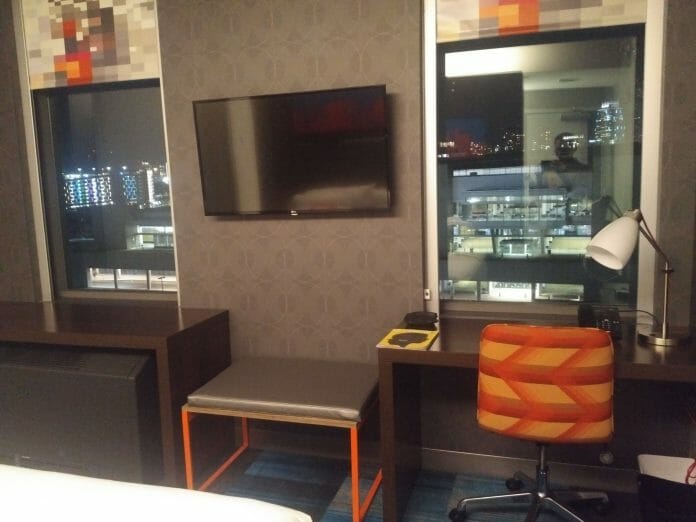 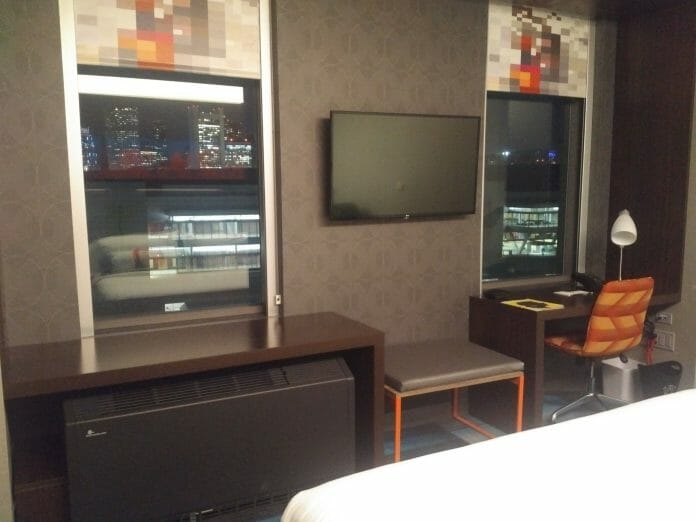 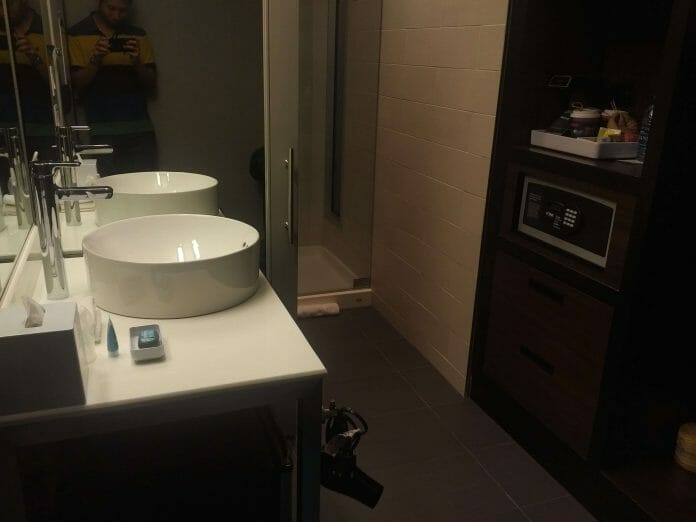 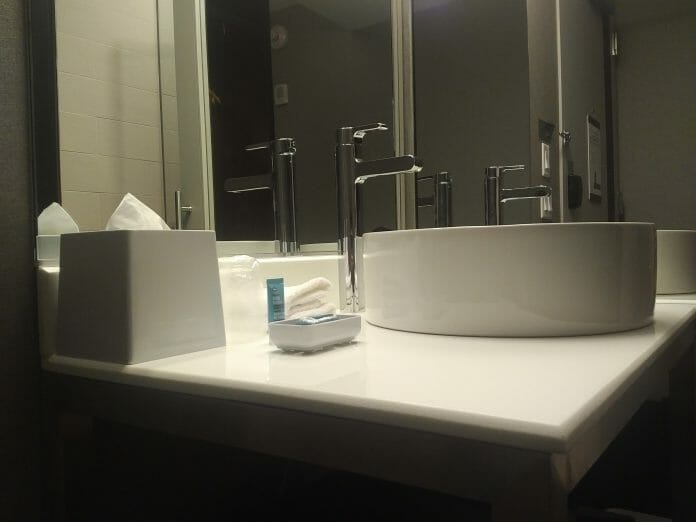 The amenities available are Bliss-branded. I know from my last visit to the Aloft Bangkok that certain Alofts are starting to cut back on amenities, replacing the Bliss toiletries with cheaper stuff. Fortunately that hasn’t happened here yet. 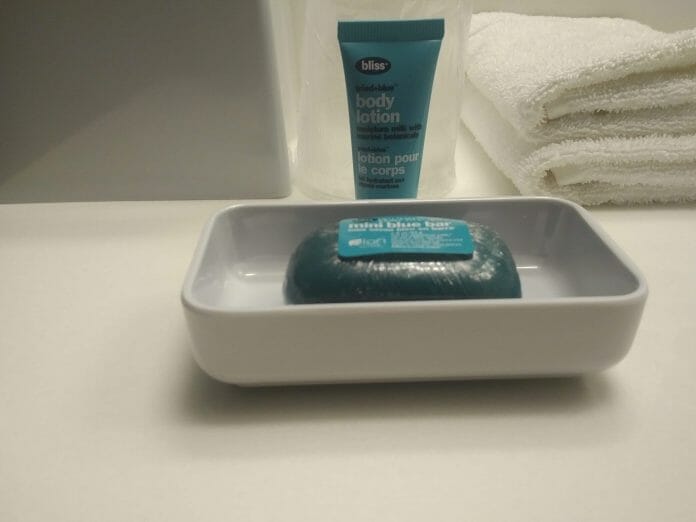 There are two pump dispensers with shampoo and body wash. 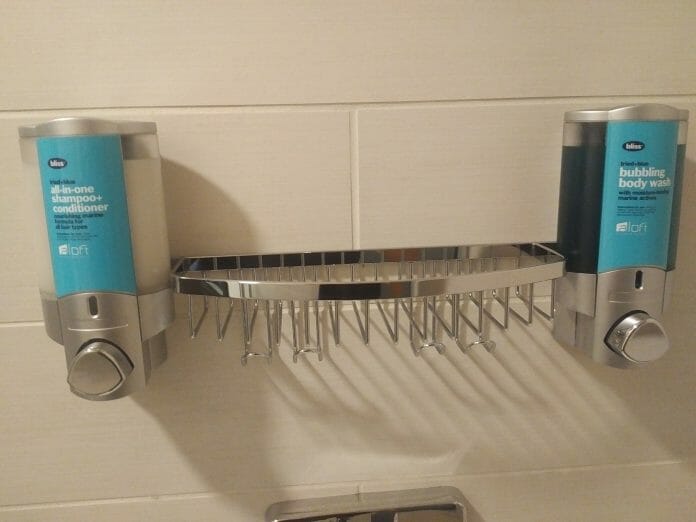 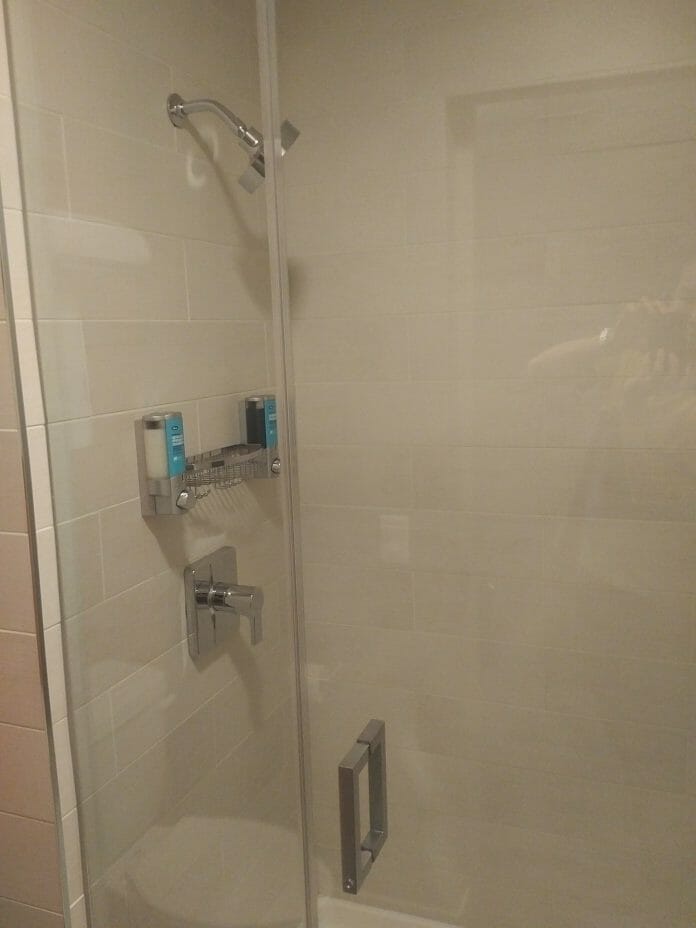 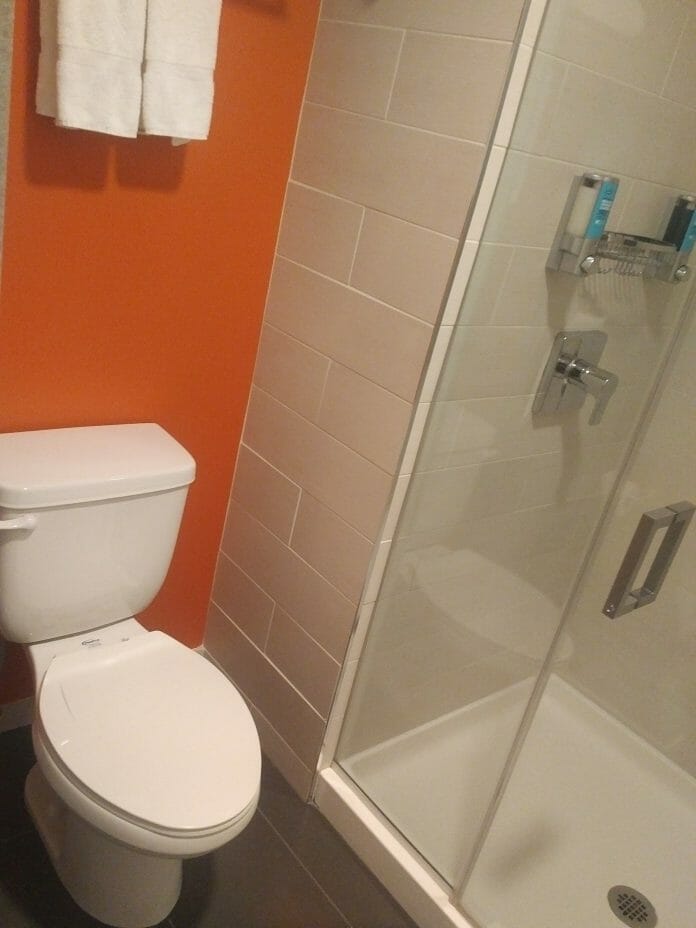 One complimentary bottle of water was found at the minibar area just outside the loo. 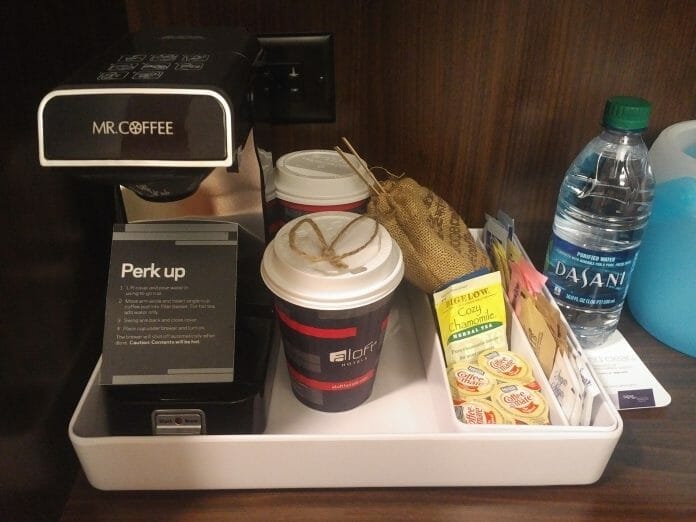 A few other points- the air conditioning unit was loud. Like, really really loud. It rattled something fierce, and after a room change I realised that all the units were the same. When you turned it on, you could barely conduct a conversation in the same room with someone else. It was puzzling why a brand new hotel would install such archaic units.

The property also overlooks what’s pretentiously called The Lawn on D (the Aloft Boston Seaport is on D street, see). It’s nice to look at and all, but do be aware that they hold events on the lawn that can generate a lot of music and noise. So if you’re sensitive to that kind of stuff, as I am, you might want to ask them to give you a room facing away from the lawn.

In the morning you can buy breakfast in the lobby area. 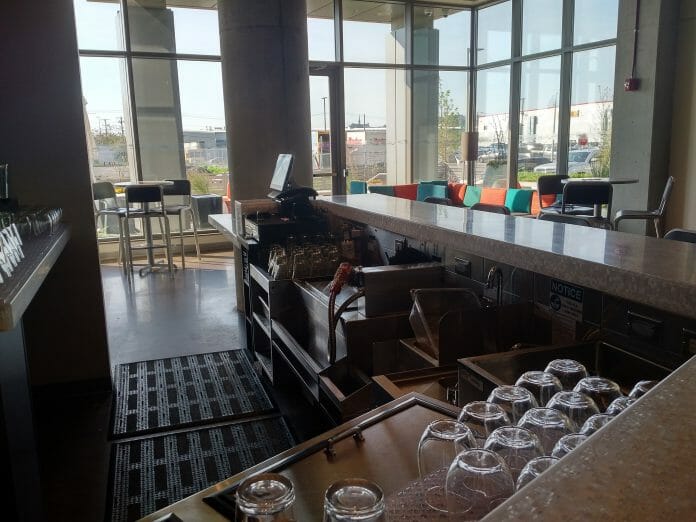 The re:fuel station is sort of like the Aloft minimart. 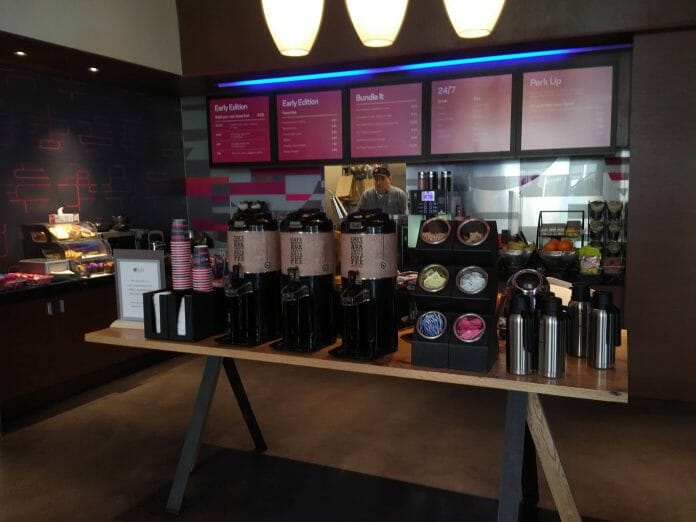 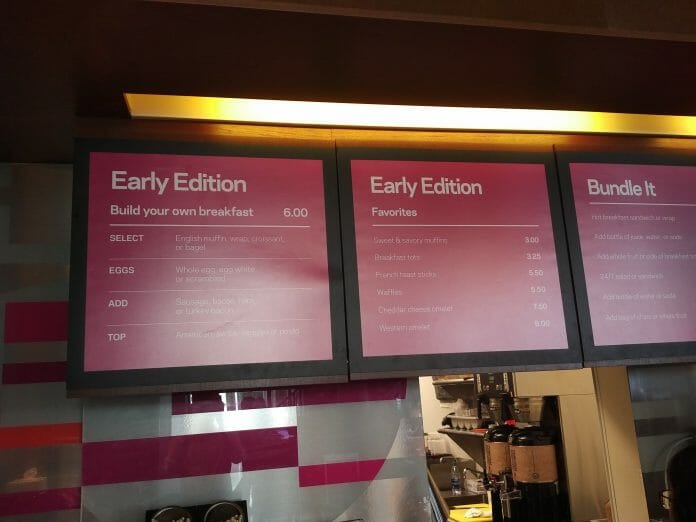 You better hope you like pre-prepared food and continental options. Because that’s all they had. 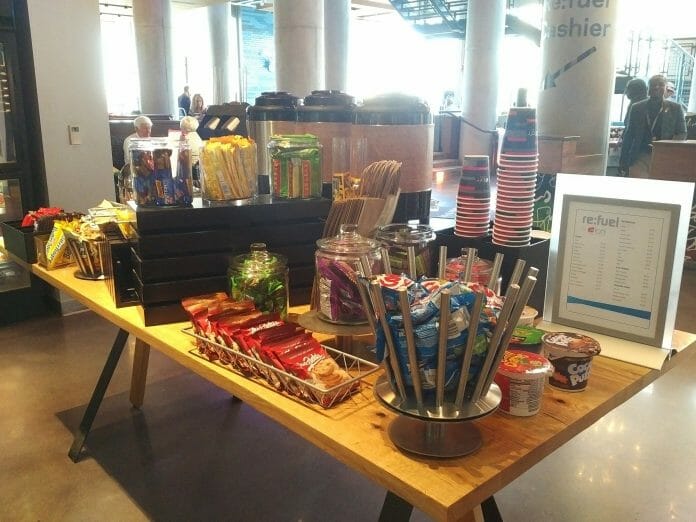 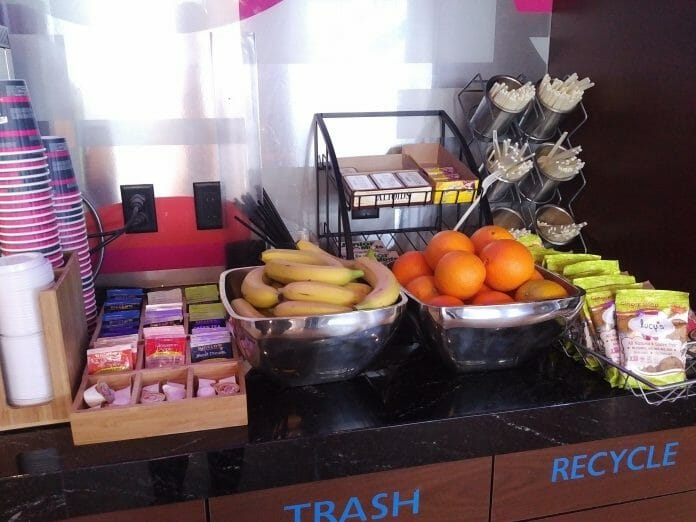 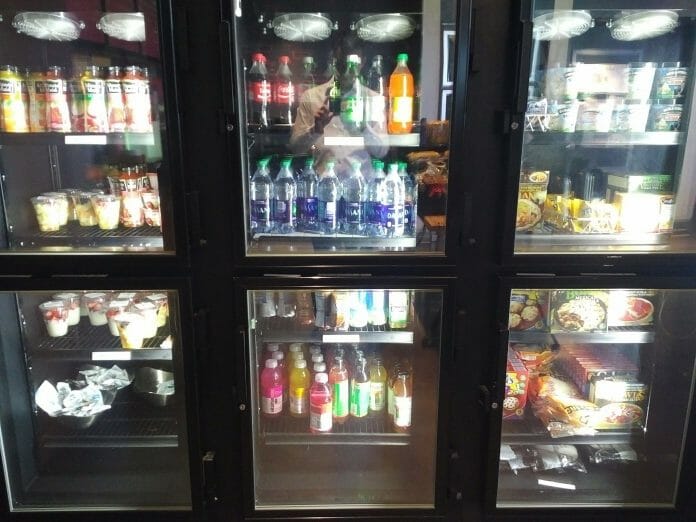 There are hot options too, but the kitchen doesn’t have a stove (!), so everything is microwaved. I asked for my eggs runny. The chef, if you can call him that, chuckled a bit to himself as he popped the eggs in. 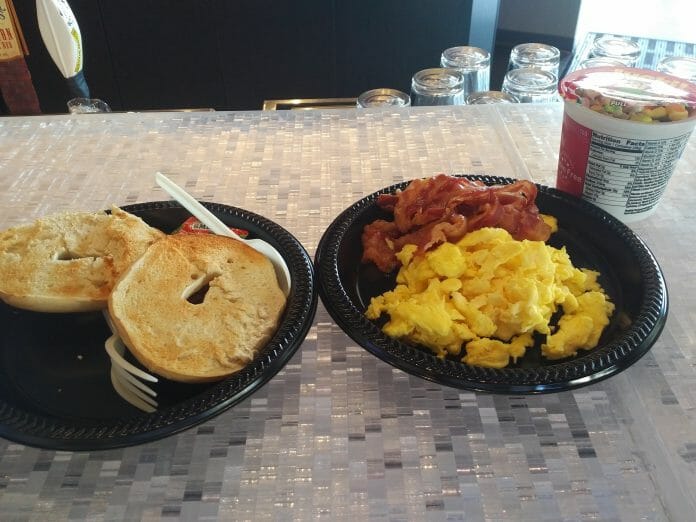 The eggs were, well, they tasted like what you’d expect if you were really living in Fallout 4. Mirelurk eggs might be better (if anyone out there got that reference congrats you win 10 Milelion points).

And this sums up my US hotel experiences. None of The Westin LAX, Westminster or the Aloft blew my socks off, but then again there are few US properties that really would. There’s nothing wrong with them per se, but you don’t really get the same feeling as when you’re staying in Asia properties. I don’t know whether it’s the general sticking to the rules (you get 500 points OR breakfast, not both) or the reluctance in some cases to play by them (not upgrading platinum members even when suites are available), but they don’t fill you with any undue sense of excitement. They’re places to spend the night, nothing more.

Next up, the domestic US first class experience.

Aaron Wong
Aaron founded The Milelion to help people travel better for less and impress chiobu. He was 50% successful.
Previous articleThe Milelion Directory has been Updated for May
Next articleThe good, the bad and the uncertain of SQ’s PPS Club shakeup